"It was special today, considering the fact after we lost the toss," Conway said 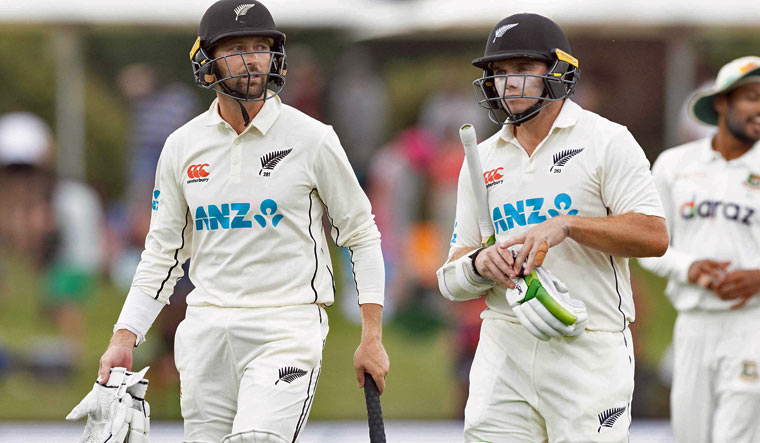 New Zealand's Devon Conway (L) and captain Tom Latham walk off the field at the end of play during the second cricket Test match between New Zealand and Bangladesh in Christchurch on January 9, 2022 | AFP

New Zealand promised to bounce back quickly from its first-test loss to Bangladesh and captain Tom Latham redeemed the pledge with a commanding unbeaten century Sunday on the first day of the second Test.

Latham lost the toss for the sixth time while standing in as captain for Kane Williamson and had to bat on a disconcertingly green pitch at Hagley Oval. By stumps he was 186 not out and with the help of a half century to Will Young and Devon Conway, who faced a nervous night on 99 not out, New Zealand was 349-1.

"I'm a bit nervous naturally but I'll try to take a sleeping tablet to help me go to bed and reassess tomorrow," Conway said.

"It was special today, considering the fact after we lost the toss. I think both teams wanted to bowl first. The way Tom Latham and Will Young went about their work was really special and Tom was outstanding to bat throughout the day and I was just grateful to bat beside him."

Bangladesh's shock win in the first test thrilled the cricket world. The ninth-ranked team in the world had beaten the second-ranked team. Even more, the immense underdogs had beaten the champions of the long format in their home conditions where they were unbeaten in their last 17 Tests.

It was the stuff of fairytales but on Sunday the quiet, pragmatic Latham brought Bangladesh back to a cruel reality. Latham hadn't previously scored even a half century but the captain dominated the day, carrying his bat through 90 overs. By stumps he had hit 28 fours for 112 runs from boundaries.

Latham accumulated steadily and briskly, reaching his half century from 65 balls, his century from 133, his 150 from 199. And he played a full array shots, favoring the cut when Bangladesh bowled too short with the new ball in the morning then leaning into his drives and bringing midwicket into play in the next two sessions.

He scored scored 70 of his 100 partnership with Young and 57 of a century partnership from 155 balls with Conway.

Latham likely will remember New Zealand had a good day on the first day of the first test when it also was sent it. It ended that day on 258-5, seemingly in a strong position. But Bangladesh fought back to win each of the next four days and take the match by eight wickets.

The Bangladesh bowlers set up that win by taking New Zealand's last five first-innings wickets for 70 runs on the second day and by bowling out New Zealand for 169 on the last day.

Latham did his best Sunday to place New Zealand in a stronger position.

He did so on a day of odd occurrences.

Latham was twice given out before lunch on Sunday yet survived to carry his bat through the day. Young's 54  his third half century of the series  included five fours, a 7 and a 5.

Ebadot Hossain was Bangladesh's man of the match in the first Test for his six wickets in the New Zealand second innings.

He came into the attack in the ninth over Sunday and had Latham out lbw with his second and fifth deliveries. In both cases the on-field umpire upheld Ebadot's appeal and Latham had those decisions reviewed and overturned.

Young reached his half century from 97 balls with a little bit of luck, after being dropped by Liton Das at second slip off Ebadot when he was 26.

His score was plumped by a seven when he ran three and a throw to the untended stumps at the bowler's end went for four overthrows. Soon afterwards the batsman took a single and another throw to the bowler went to the boundary.

After Young, Conway continued his prolific accumulation of runs in tests and was left on the brink of a century at stumps. He scored 122 in the first innings of the first test and added a half century on Sunday from 83 balls.

If he goes on to his century, the South Africa-born batsman will have scored a double century, two centuries and a half century in five Tests.