Tyres were set ablaze and effigies were burnt 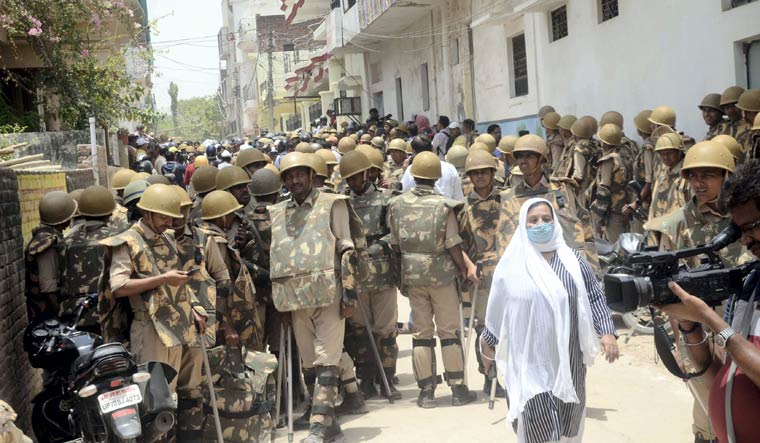 Security personnel keep vigil during the demolition of the residence of an alleged conspirator of violent protests over remarks on prophet Muhammad, in Prayagraj | PTI

The violence-hit districts of West Bengal were limping back to normalcy on Monday with sporadic protests reported from a few areas as heavy police deployment continued.

Train services were affected in the Sealdah-Hashnabad section of the Eastern Railway in the morning after protesters blocked the railway tracks, they said.

Tyres were set ablaze and effigies of now-suspended BJP spokesperson Nupur Sharma were burnt as protesters blocked the tracks. "Services were affected for around 20 minutes. Heavy police deployment is in place around the Hashnabad station in North 24 Parganas," a senior official said.

In Howrah, Murshidabad and Nadia districts, heavy police presence was seen as prohibitory orders under Section 144 of the CrPC continued in certain areas.

At least 25 people have been arrested for their alleged involvement in the rioting in Bethuadahari in Nadia, a senior police officer said.

"We have arrested 25 people in connection with Sunday's vandalism. Search is on for others involved in the vandalism," he said.

Local traders have called for a 72-hour bandh in the area.

Security has been strengthened at the Bethuadahari railway station where a train was vandalised on Sunday over inflammatory comments against Prophet Mohammad, officials said.