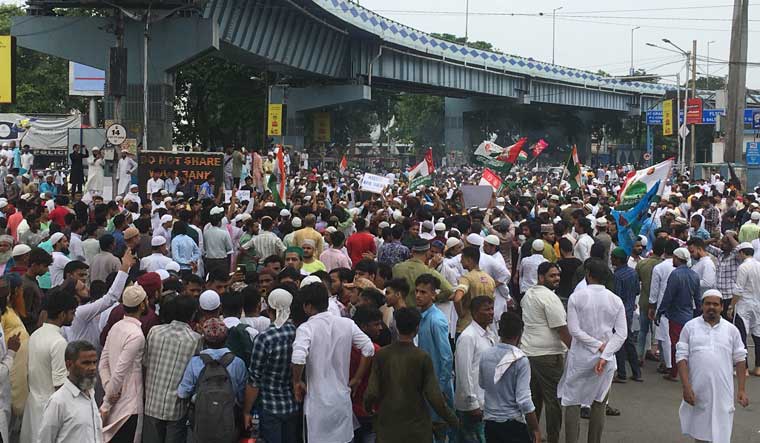 At least 60 people were arrested after a wave of fresh violence in the industrial district of Howrah, parts of Murshidabad district and South 24 Parganas, as Chief Minister Mamata Banerjee vowed to take strict action against those attempting to instigate riots in the state.

Police chiefs were shunted out to bring in officers with tough reputations into areas scarred by violence since Friday and the Pirzada of Furfura Sharif, a cleric with political ambitions was served a notice Saturday by the West Bengal Commission for Protection of Child Rights (WBCPCR) Saturday for using children in violent demonstrations.

Suspension of internet services which had been clamped since Friday on Howrah district was extended to parts of Murshidabad district too Saturday. The violent demonstrations and protests are targeted against comments by suspended BJP leader spokespersons on Prophet Mohammad.

At least 60 people were arrested and booked under IPC sections that deal with rioting, attempt to murder and causing damage to public properties, among others, in connection with violence in West Bengal's Howrah district, police said on Saturday. Widespread violence broke out in Howrah district on Friday over inflammatory comments by now-suspended BJP functionaries Nupur Sharma and Naveen Jindal.

Fresh violence was reported in Panchla Bazaar area in West Bengal's Howrah district on Saturday as protesters clashed with the police and several houses were set on fire, a senior officer said. Protesters pelted policemen with stones, injuring some of them, and also vandalised a BJP party office. Several fire tenders were pressed into service as police lobbed tear gas shells to disperse protesters, the officer said, adding the situation was "under control" at the moment. "The agitators have been dispersed. Some policemen have been injured in the stone-pelting. We are conducting a route march in the area. The situation is under control," he said.

The West Bengal government on Saturday also suspended internet services in parts of Murshidabad district till June 14 to stop the spread of misinformation following violence in Howrah, where such a clampdown is already in force.