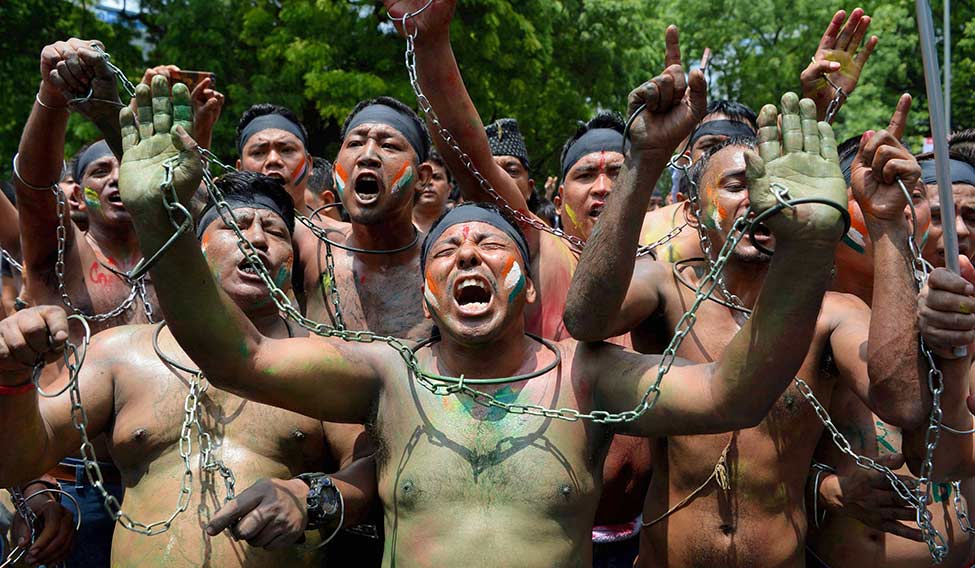 A month ago, West Bengal Chief Minister Mamata Banerjee made a shocking allegation about the ongoing agitation in Darjeeling. She said China was behind the violent agitation for a separate Gorkhaland state. “We all know the Siliguri corridor, known as Chicken’s Neck, being a sensitive location that China wants to influence,” she said. “I have a report that the Darjeeling agitation is part of that big game.” The Siliguri corridor is a narrow swath of land that connects the northeastern states to the rest of India.

While Mamata was in Delhi to attend the swearing-in ceremony of President Ram Nath Kovind, she met Union Home Minister Rajnath Singh and apprised him about the Chinese interference. MPs from her party, the Trinamool Congress, demanded a detailed parliamentary debate on the issue. Union home ministry sources, however, said Singh was yet to receive any intelligence report to corroborate Mamata’s charges. A senior member of the Trinamool Congress said Singh asked the chief minister for a report on the issue. It is now being prepared by a three-member committee at the government secretariat in Kolkata.

The Intelligence Bureau, too, does not have any information about Chinese involvement in the Gorkhaland agitation, which is spearheaded by the Gorkha Janamukti Morcha (GJM). But a team, including members from the state Counter Insurgency Force (CIF) and three police officers of the inspector general rank, recently travelled to Darjeeling. They said they saw signs of growing Chinese influence. “They reported to the chief minister that in the Darjeeling hills there were several educational institutions, which taught Tibetan and Chinese languages and provoked students with anti-India rhetoric,” said a CIF officer.

An IPS officer told THE WEEK that Chinese language education was common in schools located on the Nepal border. He also spoke about sponsored educational trips to China for students as well as prominent local citizens. Ashok Bhattacharjee, MLA, who is the chairman of the Siliguri Municipal Corporation, visited China in May. Bhattacharjee was one of the longest-serving ministers during the days of the Left Front rule. He was invited by the Chinese consul general in Kolkata during a visit to Darjeeling in March. “After the consul general’s trip, the Chinese ambassador, too, visited Darjeeling. A lot of interesting people accompanied the dignitaries. While the dignitaries were doing harmless things, the companions were busy doing other things,” said the officer. Local officials could not track the movements of the entourage because of a shortage of staff. And, the state intelligence branch failed to file a detailed report of the visit.

Bhattacharjee said there was nothing wrong in visiting China. “Even the chief minister was invited. I had taken permission from the government. I fail to understand why they should probe my visit,” he said.

The office of Liu Jinsong, deputy chief of mission of the Chinese embassy in Delhi, said he was unable to comment on the issue. Xie Liyan, spokesperson for the embassy, said it was “difficult to receive any question at this juncture”. Press attache Xu Xiarong said the embassy had no plans to comment. The office of Ma Zhanwu, consul general of China in Kolkata, said he was in no mood to make a fresh statement. “This is time for action rather than giving speech,” said the statement from the office.

Seven years ago, the IB had submitted a report on Tibetan monasteries in north Bengal, which had been used by China for espionage, especially to collect information about Army installations in the region. The Left Front government of the day had then asked the monasteries to screen their visitors thoroughly and not to allow unknown persons to stay. 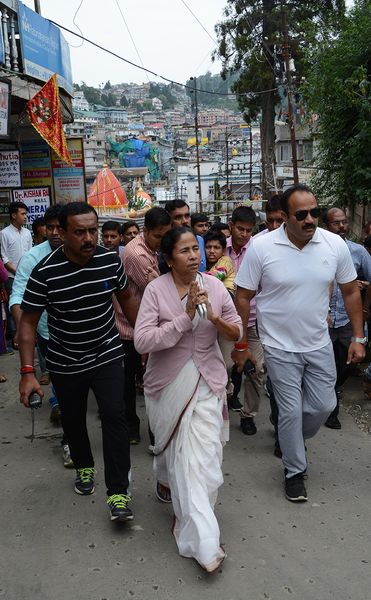 In solidarity: Mamata Banerjee on her way to a hospital in Darjeeling to visit policemen injured in clashes with Gorkhaland activists | Salil Bera

behind the agitation. An officer from the Military Intelligence, too, confirmed the Nepali connection. According to sources, the Communist Party of Nepal (Maoist) is helping the agitation politically and financially. Other communist outfits of Nepal, which profess allegiance to China, are also involved.

The CPN(M) has been associated for a long time with the CPI(ML) Naxalbari, which merged with the CPI (Maoist) three years ago. Banned in India, the CPI (Maoist) operates from Nepal and it has some influence in north Bengal and Assam, especially among the unemployed tea workers. It has now become active among the Gorkhas.

A senior officer said the police were surprised by the financial, logistical and arms support the GJM was receiving from Nepal. “Despite shops and businesses being closed, there has been no shortage of food or other requirements,” he said.

When THE WEEK contacted them, CPN(M) leaders openly professed their support for the Gorkhaland agitation. “We are deeply shocked to see the oppression by the state regime of West Bengal. They are using the Army against innocent Gorkhas, who have their linguistic and cultural rights. They have our full support,” said Dharmendra Bashtola, senior leader of the CPN(M). The party had organised a massive demonstration outside the Indian embassy in Kathmandu and written to Prime Minister Narendra Modi to “secure the lives and rights of the Gorkhas in Darjeeling”.

GJM’s second-in-command, Roshan Giri, said Mamata’s allegation about Chinese interference in Darjeeling was a blatant lie. “I don’t know how to describe her lack of knowledge on the issue. We are fighting for a separate state under the Indian Constitution. Why should China help us? What would they stand to gain out of it? We are Indians by birth and all Gorkhas would remain Indians,” said Giri. He said Mamata was trying to implicate the GJM leadership on terrorism charges and warned that his organisation would settle for nothing less than a separate state. “We are giving some more time to the Central government. But our patience is running out.”

Swaraj Thapa, vice president of the GJM, said if Chinese influence was growing in north Bengal, that was not because of the Gorkhas. “Help us to have a separate state, and we will checkmate China,” he said. “We are getting support from Gorkhas all over the world, including Nepal. But we are not accepting arms and ammunition,” he said. “We have the support of all Naxalite parties, including the democratic ones. If they support us, what can we do?”

A senior intelligence officer said young men from the region were being trained by insurgent groups in Assam and Meghalaya. And, they return to join the army of agitators. Giri said the Gorkhas were real fighters, who served in the Army. “But our agitation is peaceful and democratic.”

Bhattacharjee predicted gloomy days ahead and said the Mamata government was losing control. “In north Bengal, cutting across ethnic groups, all are at the receiving end. The chief minister has failed to understand the diversity of the region and is playing with fire,” said Bhattacharjee. “Mamata has talked about China’s role. She will have to prove it. Otherwise, she should apologise.”

Your form could not be submitted.
This browser settings will not support to add bookmarks programmatically. Please press Ctrl+D or change settings to bookmark this page.
Topics : #Bhutan | #China | #West Bengal | #Bhutan and China