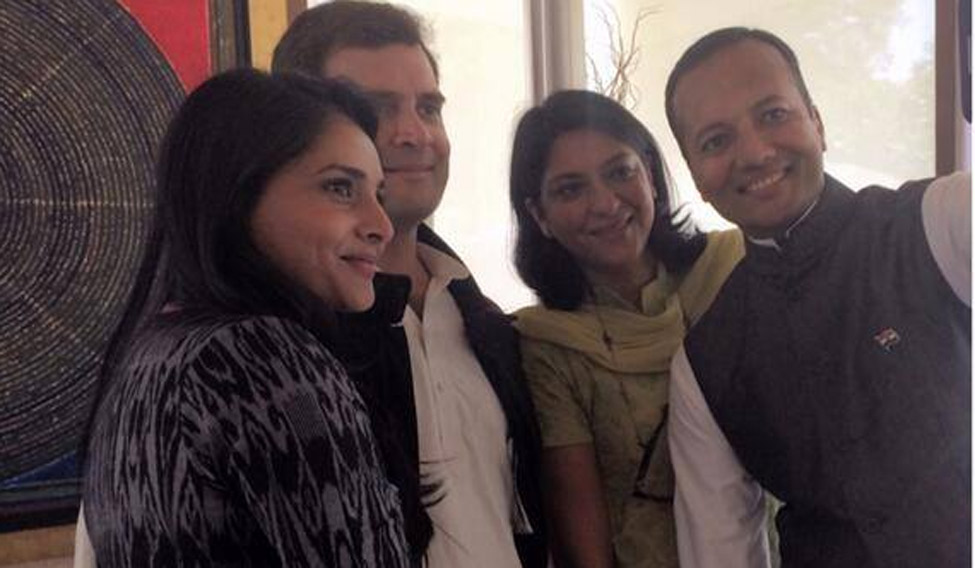 She set the screen on fire with good performances in Kannada, Tamil and Telugu films, and, now, along with her team, she is helping Congress president Rahul Gandhi fight the political fire.

Meet Divya Spandana (35), alias Ramya, who seems to have completely turned the tide for the grand old party of Indian politics and Gandhi.

Once a popular actor, Spandana made her debut in a Kannada film, Abhi, in 2003. After that, she acted in many Tamil, Telugu and Kannada films, with most of them doing well at the box office.

Ramya was the name given to Spandana by Parvathamma, wife of Kannada cine icon Rajkumar, on the sets of Abhi, in which her son Puneeth Rajkumar played the male lead. Spandana entered politics in 2012. She won the byelection from Mandya Lok Sabha constituency in Karnataka in 2013 but lost the 2014 general elections from the same constituency.

A two-time winner of the Filmfare Award, Spandana was selected to lead the social media cell of the Congress in May 2017. She replaced Deepender Hooda, son of former Haryana chief minister Bhupinder Singh Hooda.

In the last few months, Spandana has multiplied the Congress' social media team’s strength—with more than 80 per cent of her team consisting of women.

Spandana's growth in the party in a short time has astonished many. Before every rally that Gandhi attends, Spandana and her team come up with interesting campaigns and one-liners, targeting Narendra Modi and the BJP. Her team mostly consists of data crunchers, technology experts, advertisers and researchers.

In recent months, Spandana and her team have asked Congress leaders, including the senior ones, to be more visible on social media and give tit-for-tat responses to any provocation or teasing remark from the BJP leaders.

Interacting with THE WEEK, Spandana said, “I don’t want to discuss strategies at the moment as this year is very crucial for us. I don’t want to reveal anything to my opponents.”

A Kannadiga, she said her party is battle-ready in Karnataka.

“All I can say is we are well prepared for the Assembly elections in Karnataka,” said Spandana. She said there was no detailed strategy on the part of the Congress to score over the BJP on social media and that Gandhi is the same man that he was before.

“He (Gandhi) is witty and intuitive. It is just that the focus is on him these days and there is a change in perception of him in the people. There is nothing more to it,” said Spandana.

Spandana said that most senior leaders of the Congress are now active on social media. The emphasis since the past few months is on state unit leaders, all of whom have been asked to be online.

Even Karnataka Chief Minister Siddaramaiah, who was reluctant earlier, has taken to social media, and it is the social media team which is credited with giving leaders like him a solid position on social media.

“In politics that’s how it is. Everything takes time. Politicians know that they have to shift focus and change their strategies every now and then. Social media only adds to the narrative. Gradually, you will see all Congress leaders using social media actively,” she said.

Spandana, these days, is busy travelling all over the country and is instructing leaders of the Congress to 'invade' social media in a major way.

Some days ago, she was in Guwahati, prior to Gandhi’s visit to poll-bound Meghalaya and Tripura. Gandhi attended a concert called Celebration for Peace on January 30 in Shillong.

“We will defend your culture and your way of thinking,” he said.

Some days ago, Spandana held a meeting with young leaders of the party in Maharashtra and told them to take note of netizens, who are steady while airing their anti-BJP views.

Spandana did her schooling in the Cliff School and St Hilda’s School in Ooty. She has a commerce degree from St Joseph’s College in Bengaluru.

“We were together in the first three grades of primary school. A dear friend, I will always cherish the fond memories of our school days,” said Devina Balagopal, who is a HR manager based in Bengaluru. Balagopal, who relocated from the US recently with her family, is looking forward to meeting Spandana in Bengaluru. “I know she is really busy at the moment. But we will meet soon as we have a lot to catch upon on,” she said.

The number of Twitter followers of the Congress is 3.82 million, and it is way behind the BJP, which has 8.59 million followers.

Gandhi’s Twitter followers jumped from 20 lakh in May 2017 to 40 lakh in July 2017, immediately after Spandana took charge. Presently, Gandhi has close to 57 lakh followers on Twitter. Incidentally, till 2009, the only Congress leader with a Twitter account was Shashi Tharoor.

PM Modi continues to lead the race in India, when it comes to the following on Twitter. With close to 40 million (4 crore) followers, he is the second-most followed world leader on Twitter after US President Donald Trump.

The BJP is not too impressed with the Congress' social media 'resurgence'. Avinash Rai Khanna, BJP's national vice president said to THE WEEK, "See, every party has its own way of attracting people on social media. Let the Congress do all that it can. But they are no match for us. They don't have any leader in the first place. Their strategies don't bother us."

Your form could not be submitted.
This browser settings will not support to add bookmarks programmatically. Please press Ctrl+D or change settings to bookmark this page.
Topics : #Rahul Gandhi | #social media | #congress | #Siddaramaiah | #Karnataka election 2018