The Somnath sentiment and Hindutva politics 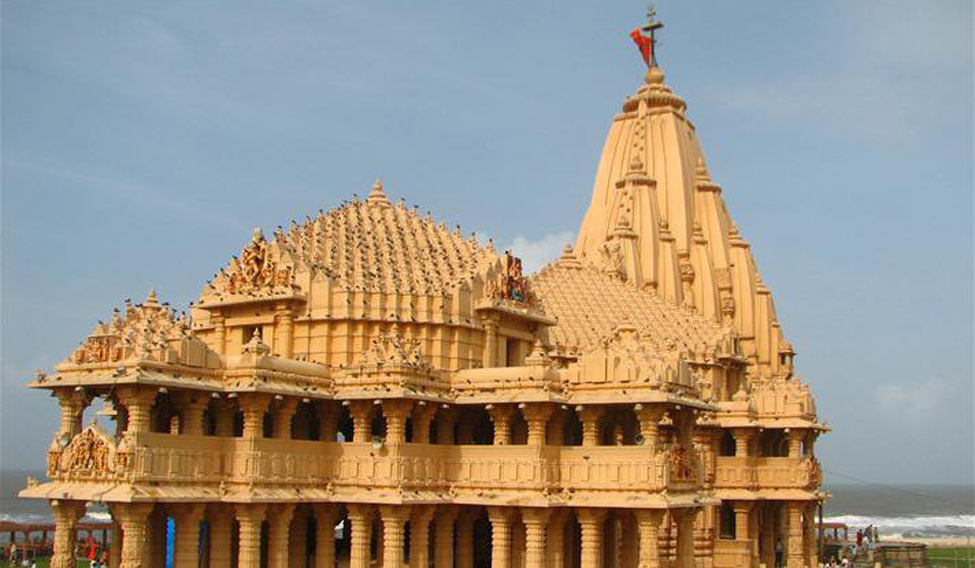 The Somnath temple | via Commons

India's Hindutva politics has come full circle from the days when the two Congress titans—Jawaharlal Nehru and Sardar Patel—squabbled openly over Somnath. Today, both Narendra Modi and Rahul Gandhi, representing two ends of India's communally polarised politics, were electioneering in and around Somnath. Both were invoking the Somnath motif in their politicking —overtly or covertly, virtually or actually, physically (by visiting the shrine) or spiritually. If Rahul visited the shrine, Modi, who is a trustee of the temple, referred to it in his speech several times.

Somnath has been like the phoenix. Every time the shrine was pulled down, it was rebuilt. Somnath's political story began a millennium ago when the Afghan invader Mahmud of Ghazni raided the temple, massacred its defendants, looted its treasury and broke the jyotirlinga, which had been revered as one of the 12 jyotirlingas—lingas on which Siva is believed to have appeared as a column of fire. Mahmud is said to have also set fire to the temple, then built of wood.

Within half a decade of the Ghaznavid invasion, the shrine was rebuilt, now in stone. Next, Alauddin Khalji's (of 'Padmavati' notoriety) general Ulugh Khan raided it in 1299, Zafar Khan in 1395, Mahmud Begada in 1451, the Portuguese in 1546 and Aurangzeb in 1665.

The shrine had been remaining dilapidated since Aurangzeb's time, and also lying embedded in the political memory of many. Avenging Somnath thus became a sentiment in the psyche of several rulers and political leaders, if not in the psyche of the masses.

In the 18th century, the Marathas, who had conquered most of north India and had pretensions of forming a Hindu empire in India after nearly six centuries of Islamic rule, invoked the Somnath sentiment. Thus, Mahadaji Shinde, who defeated Mahmud Shah Abdati in 1782, brought back what he thought was the silver gates of Somnath from Lahore.

But the shrine priests rejected the gates as not of Somnath. The gates were finally placed in two temples at Ujjain.

By now, the Maratha power, already crippled after their defeat at the hands of Ahmed Shah Abdali in 1761, had been waning. Their imperial ambitions were finally ended by Lord Lake who crushed them in the battle of Delhi in 1803.

The British played their communal card with Somnath in the 19th century. To save face after a humiliating defeat at the hands of the Afghans in the first Anglo-Afghan war, Governor-General Lord Ellenborough asked his retreating commanders to bring back the sandalwood gates of Ghazni town, which were believed to have been originally Somnath's. He even made a proclamation that India was now avenging an 800-year-old insult.

But upon arrival in 1842, the gates were found to be not of Somnath's and also made of cheaper wood. They were consigned to a lumber room in the Agra fort where they can still be seen. And Ellenborough, mockingly called the Elephant, was even ridiculed in the British Parliament for having had pretensions of a Hindu emperor. (Interestingly, one of Ellenborough's bitterest critics was Lord Wellington, who, as Arthur Wellesley had partnered with Lord Lake in defeating the Marathas.)

In the 20th century, rightist elements in the national movement began politicking over Somnath, located in Junagarh then ruled by a Muslim prince.

The nawab got the principality acceded to Pakistan in 1947, but Patel got it annulled by sending in the army. The nawab fled to Pakistan with his diwan, who was none other than Shahnawaz Bhutto, the father of future Pakistan prime minister Zulfiqar Ali who is said to have had a visceral hatred for India.

Patel, himself a Gujarati, now made it an article of faith to have the shrine rebuilt. Jawaharlal Nehru was completely opposed to it, as a matter of secular principle. Finally Mahatma Gandhi suggested a compromise—build the temple, but don't use state funds; build it with money raised from the public. Patel agreed. After Patel's death, the construction was supervised by K.M. Munshi, then food and civil supplies minister in his personal capacity.

The next controversy arose when Munshi invited president Rajendra Prasad to the installation ceremony. Nehru said it was inappropriate for the president to be associated with a religious ceremony, but Prasad attended the ceremony, leaving Nehru seething in anger.

Somnath came to be invoked again politically during the Ayodhya movement in the late 1980s. The Hindu right now wanted the Ayodhya temple, said to have been pulled down by Babar's generals in 1526-27, to be rebuilt just as Patel had got Somnath rebuilt. Thus in 1990, BJP leader L.K. Advani selected Somnath as the starting point of his Rath Yatra to Ayodhya. His right-hand man was none other than Narendra Modi.

Today, the wheel has come full circle, when Nehru's great grandson prayed at Somnath, and Modi mocked at him.

Your form could not be submitted.
This browser settings will not support to add bookmarks programmatically. Please press Ctrl+D or change settings to bookmark this page.
Topics : #Gujarat elections | #Narendra Modi | #Rahul Gandhi | #Assembly election 2017