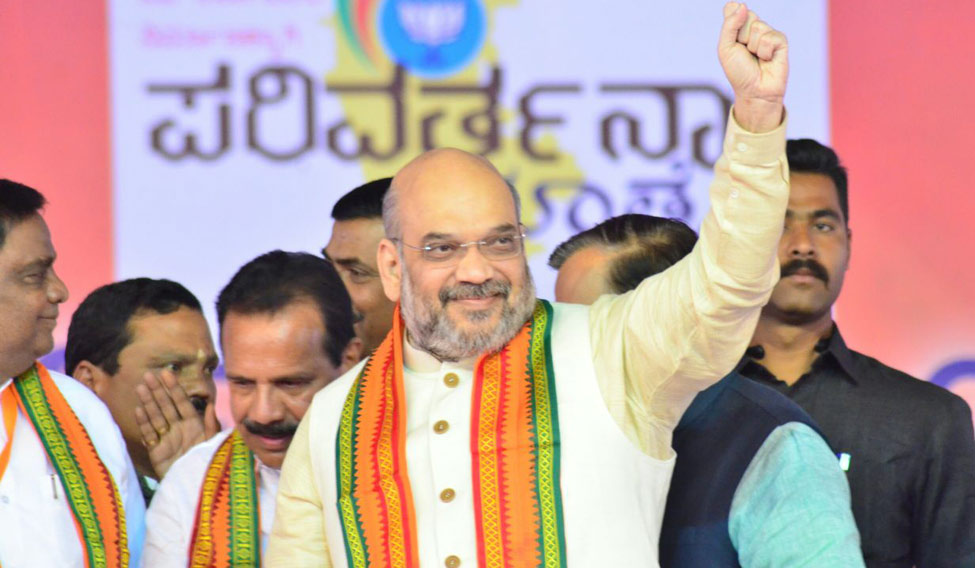 Amit Shah at the rally in Mysuru

"Today's state-sponsored Karnataka bandh imposed on people by deploying police forces and halting transport services by the Siddaramaiah government has only proved it," said Shah, who was addressing the Parivarthana Rally of the BJP that culminated at Mysuru.

"This shows the Parivarthana Rally of the BJP has instilled fear in the mind of the Congress Party," alleged Shah, adding that the Siddaramaiah government, which halted buses and imposed a total shutdown in the state, would try to do it again on February 4, to disrupt Prime Minister Narendra Modi's rally at Bengaluru.

"I am confident that the huge turnout at Modi's rally will be an indication to what happens in the April polls. I dare the Karnataka chief minister to stop the BJP from forming the government," declared Shah.

Shah congratulated BJP state president and chief ministerial candidate B. S. Yeddyurappa on completion of the Parivarthana Yatra calling it a 'historic' feat, as the 75-day rally that began on November 2, 2017 has traversed all 224 Assembly constituencies, covering more than 8,000km.

"Along the Parivarthana rally, people asked us what change we propose. Is it change in MLA, government or chief minister? We assured them that the BJP will strive for transformation that will change the plight of farmers, youth and women and fight the culture of corruption and politics of appeasement," said Shah.

The Siddaramaiah government has come forward to celebrate Tipu Jayanti, instead of remembering the contribution of great people who have worked for Karnataka's development, alleged Shah, hailing Modi's idea of "Sabka Saath, Sabka Vikas." "We don't believe in dividing the society," he added.

Attacking Siddaramaiah for withdrawing cases against the PFI, while being a mute spectator to the killings of more than 20 RSS/BJP workers in the state, Shah assured people that the BJP would go after the killers and bring them to justice.

When the BJP goes to the polls, it carries account of every penny spent by the Centre in Karnataka as Siddaramaiah has been falsely accusing the Modi government of not providing grants to Karnataka.

"Modi government has increased Karnataka’s share in central revenues from Rs 88,583 crore under 13th Finance Commission to Rs 2,19,500 crore under the 14th Finance Commission. Where did all this money go, Siddaramaiahji?" asked Shah, adding that none of the 106 pro-people schemes of the Centre were reaching the people in Karnataka as Siddaramaiah feared that Modi would grow popular.

Shah said the Congress party opposed triple talaq bill due to the politics of appeasement but he wants to assure Muslim sisters and mothers that the BJP and Prime Minister Narendra Modi are committed to passing this bill to do justice to them.

"I appeal to the people of Karnataka to uproot Siddaramaiah government," he said.

Your form could not be submitted.
This browser settings will not support to add bookmarks programmatically. Please press Ctrl+D or change settings to bookmark this page.
Topics : #Amit Shah | #Siddaramaiah | #Karnataka election 2018