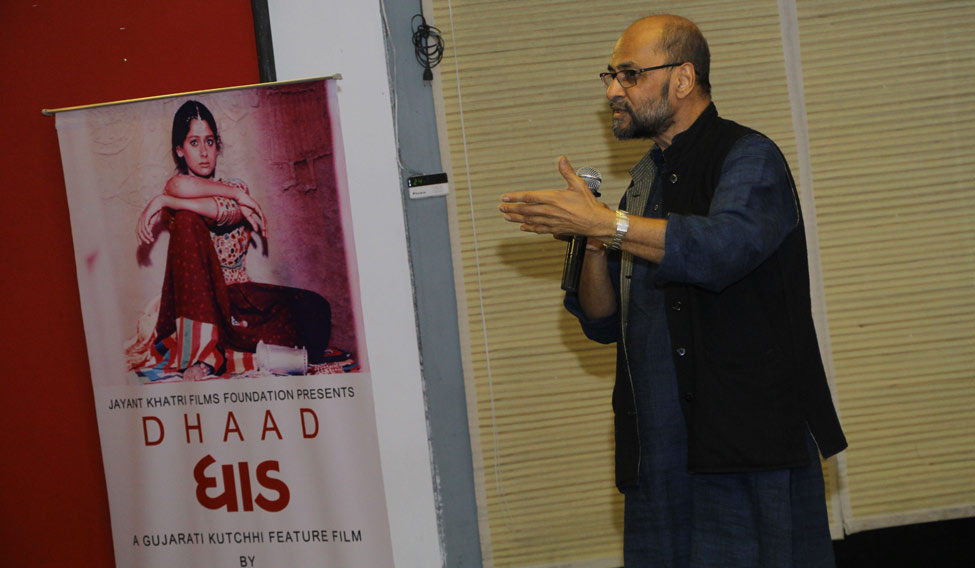 Filmmaker Paresh Naik at a press conference in Ahmedabad

The plot revolves around the life of an impotent man Ghelo, essayed by Menon, who is in search of a child for himself and water for his land. His three wives, played by Nandita Das, Sujata Mehta and Sameera Avasthi, fail to deliver a child.

Out of desperation, Ghelo raids a landlord's home. When the landlord's pregnant daughter challenges him during the raid, his conviction begins to melt away. He wanted to prove his conviction that the rich and the powerful can only be contained by asserting more power over them. The film was shot in Kutch.

Filmmaker Paresh Naik said that only little work had remained when 2001 earthquake struck. “There were funding problems as a result of which the film got delayed,” he said, adding that then Shemaroo stepped in.

“I am elated that the film is finally releasing,” he said. More than three times, the crew had given up the hope of the film ever releasing.

To begin with the film is being released in 40 theatres in Gujarat and thereafter it will be released in areas of Mumbai that have predominant Gujarati speaking population, Naik said.

Asked whether it was record of any sort as the film was releasing after 17 years, Naik said, “Could be. It will be a blemish I would not want to take.”

The film maker said that the story still holds good despite Narmada waters reaching Kutch. Narmada waters haven't reached the remotest areas of the border district and the situation still remains the same as depicted in the film.

He said that he considers the film as an extension of education and culture.

Produced by Kirti Khatri, a veteran journalist, the music has been composed by Vanraj Bhatia. It is based on a story by Jayant Khatri, Kirti's father and a writer himself. Jayant died in 1968.

Naik said that Menon was signed for Rs 50,000 and Nandita Das for Rs. 1.25 lakh. “Both of them have still not been given the full amount,” he said.

Juhi Chawla says her kids not thinking of Bollywood

IANS | New Delhi: Actress Juhi Chawla says her children, Arjun and Jahnavi, are not thinking about entering Bollywood at the moment. But she will be "thrilled" if they decide to get into showbiz.

The actress is married to businessman Jai Mehta.

"Jahnavi is academically inclined. She is extremely brilliant and a focused girl and is extremely hard-working. She topped History in India in her IGCSE (International General Certificate of Secondary Education) exams in 2017," said Juhi.

"Arjun is an all-rounder. He is quite a clown. He is really fun and expressive and can do everything but I think he gets shy. I would be thrilled if my kids would like to join Bollywood. At this moment, I don't think they are thinking of Bollywood," added the actress.

At the moment, she is enjoying her stint as a narrator on Epic channel's TV show Sharanam.

"I am enjoying doing this show because one learns something absolutely amazing and new about the places of worship which have been here for centuries," she said.

Your form could not be submitted.
This browser settings will not support to add bookmarks programmatically. Please press Ctrl+D or change settings to bookmark this page.
Topics : #Gujarat | #Nandita Das