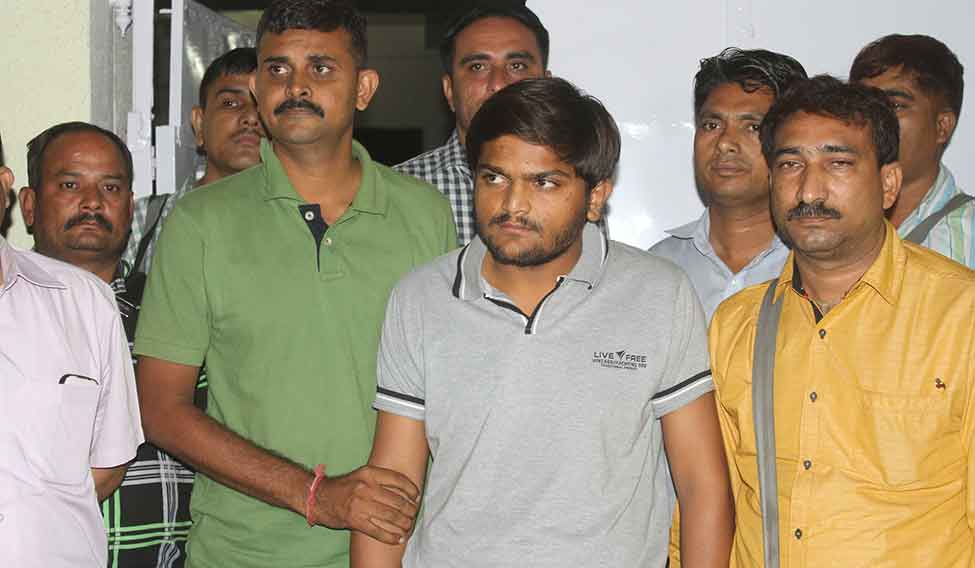 Hardik Patel, the spearhead of the Patel agitation in Gujarat, is on his way out

Two months ago, nearly three lakh people converged on Ahmedabad, responding to a call for protest by Hardik Patel, a 22-year-old commerce graduate from Viramgam. As the leader of the Patidar Anamat Andolan Samiti (PAAS), Hardik was spearheading an agitation to “protect the interests” of Patels, a politically and economically influential community in Gujarat that constitutes 14 per cent of the state’s six crore population. The demand was that the Patel community be given reservations in government jobs and education under the other backward caste (OBC) quota.

The agitation had kept the BJP government on tenterhooks for weeks. The breaking point came at the mega rally in Ahmedabad on August 25. After he addressed the rally, Hardik began an indefinite fast, demanding that Chief Minister Anandiben Patel come personally to receive a memorandum from him. The police detained him and allegedly beat up his supporters. It sparked violence across the state, resulting in the death of 13 persons, including a police constable. And, for the first time since the 2002 post-Godhra riots, many cities were placed under curfew.

The agitation thrust Hardik into the limelight. His photographs and comments started appearing not only in national media, but foreign newspapers as well. Patels who felt aggrieved at the high cost of education and job reservations for backward classes rallied behind him. Hardik was so successful in mobilising Patels that the tremors of the agitation were felt even in the US. A section of the Patel community in the US staged demonstrations during Prime Minister Narendra Modi’s recent visit to the country.

The poster boy of the Patel community, however, now faces two charges of sedition against him. One charge is in connection with a video that recently went viral, in which Hardik is seen as advising Vipul Desai, a supporter who had threatened to commit suicide, to “kill a couple of policemen if he (Vipul) was so courageous”. Hardik allegedly made the remark in Surat. Relatives of policemen in and around Surat are now demanding action against him.

The second charge pertains to his alleged bid to overthrow the state government. Hardik is currently in the custody of Ahmedabad Crime Branch, which is looking into how he sourced funds for the agitation. The police say some of his statements during his speech on August 25 were inciting. Hardik’s parents, however, maintain that he has not done anything wrong.

Hardik’s downfall, perhaps, has its origins at the massive rally in Ahmedabad. Some leaders of the Patel community criticised him for launching the hunger strike and demanding that the chief minister personally accept the memorandum from him. Hardik also received flak when his supporters did not allow Lalji Patel, head of the Sardar Patel Group, another prominent organisation of Patels, to share the stage with Hardik in Ahmedabad. Lalji was allowed only after the police intervened. Though Lalji and Hardik have been saying that they are on the same page over the reservation issue, they have not been spotted together at public meetings more than twice.

In what could have been a national embarrassment, Hardik even threatened to stall the One-Day International between India and South Africa in Rajkot on October 18. He and his supporters were arrested before they could reach the stadium. Pictures of Hardik holding the tricolour upside down on a bamboo stick before his arrest went viral.

The state government had earlier offered to hold talks with the agitators, but Hardik said he first wanted action against police officers who were allegedly involved in “excesses” against the Patel community after the incidents of August 25. The offer for a dialogue was important considering that the state government had made it clear that it would not be possible to give reservation for Patels. “Hardik lost the opportunity to gain strength from the negotiations with the government,” said Prakash Shah, a political analyst.

Hardik then announced a ‘reverse Dandi march’—from Dandi to Ahmedabad—in a bid to scale up the agitation. But, before he could begin the march, he and his supporters was arrested. In between his arrests, Hardik toured the country. But his rallies in Madhya Pradesh, which has a sizeable population of Patels, received lukewarm response. At the national level, Hardik formed Patel Navnirman Sena and appointed himself as its head.

Political analyst Vishnu Pandya said Hardik’s fall happened because of his lack of vision. The agitation might not continue for long, he said, but the anger of the Patel community may reflect in the upcoming civic elections in the state.

Said Shah: “The very basis of demand by the Patels for reservation under the OBC category was wrong. If Hardik wanted to do anything for the community, he should have challenged the economic policies, because of which the community had felt left out.”

Hardik’s shenanigans have provoked the ire of the Gujarat High Court. Hearing a habeas corpus petition filed when he went missing after addressing a gathering in north Gujarat, the court asked Hardik and his advocate to produce evidence to back the claim that he was “forcibly kept by the police”. Hardik later said he was detained by people who “looked like police” and that they had left him in a car on the road.

Once, Hardik came to a news conference 45 minutes late. When journalists asked about the reason behind the delay, he said, “With me, it will be like this only. If you want, you cover.” Angered by the statement, the journalists boycotted the meet.

Even as Hardik's popularity slides, the source of funding for the agitation continues to remain a mystery. There were rumours that the RSS was secretly supporting it to launch a nationwide debate on reservation on economic basis. Those in the government even saw a Congress hand in the agitation. But now it has been revealed that several BJP leaders, including two former ministers, were in constant touch with Hardik’s colleagues. And, it remains to be seen how the agitation would affect the upcoming civic elections in the state.