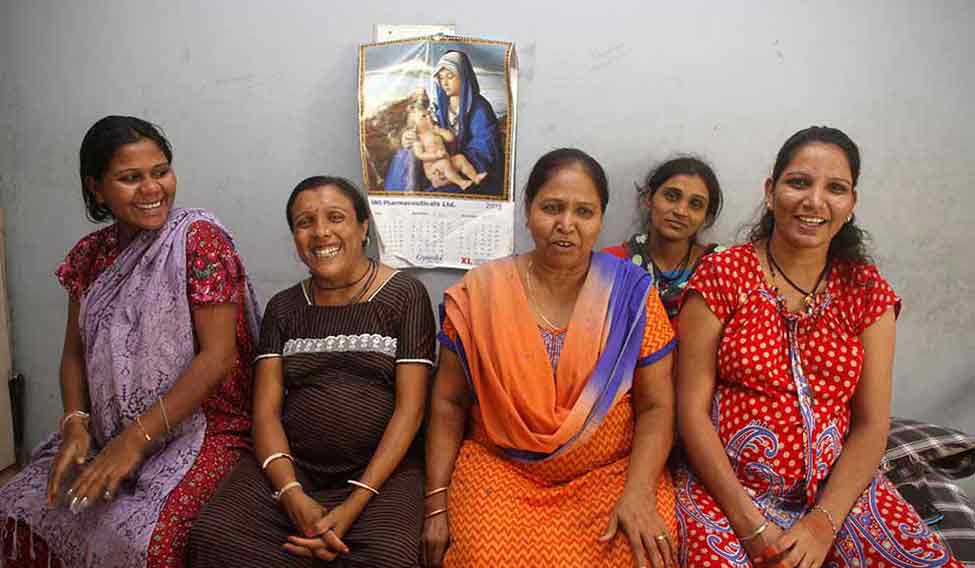 Womb world: Women at a surrogate home in Gujarat. Though all smiles now, surrogates are worried about the looming crisis | Janak Patel

Anand, in Gujarat, has been living up to its name, making many a childless couple from across the country and abroad happy through surrogacy. The milk capital of India is now more known for the success stories of surrogacy. So much so that 5,000 families in this city of over two lakh people are directly or indirectly dependent on the fertility industry for their livelihood. Take, for instance, Grace Parmar, who is all set to become a surrogate mother again; this time for a UK-based couple. The last time she did so, she earned 14.50 lakh. Like many other women, Grace chose the path for better livelihood. But soon after, her husband, Binyamin, who works in a garment factory in Ahmedabad, was diagnosed with cancer. “The money that I earned went towards his surgery and chemotherapy. Had it not been for this money, I don’t think my husband would have been alive,” she says.

Surrogacy is said to be a 1900 crore to 11,300 crore business in India. But now, this booming business has been hit by a bump. If the Union government has its way, foreigners will not be entertained for surrogacy in the country. THE WEEK is in possession of a letter, dated October 27, 2015, from the Indian Council of Medical Research (ICMR) to assisted reproductive technology (ART) centres, which states that “as per the stand of the Department of Health Research, Ministry of Health and Family Welfare, Govt of India, the surrogacy in India will be limited to Indian married couples only and not to the foreigners. Therefore, you are requested not to entertain any foreigners for availing surrogacy services in India.”

The intimation has taken in vitro fertilisation practitioners, foreigners and surrogates by surprise as it was only on September 30, 2015, that a draft of The Assisted Reproductive Technology (Regulation) Bill, 2014, was put up on the ICMR website, inviting suggestions in 45 days. The proposed legislation aims at proper regulation and supervision of ART clinics and banks in the country and for prevention of misuse of this technology, including surrogacy, and for safe and ethical practice of ART services.

It is a bad decision, says Dr Himanshu Bavishi of Bavishi Fertility Institute in Ahmedabad. He says infertile couples will suffer the most, and he is clueless as to under whose pressure such a decision was taken. Anthony, a Canada-based lawyer, and his wife still have three fertilised embryos at Dr Nayna Patel’s Akanksha Infertility Clinic in Anand. “I am wondering what will happen to the embryos,” he says. The couple, who had waited 17 years for a child, had a girl, Dharavai, through a surrogate around three years ago and recently a boy, Dararith, through the same procedure. “IVF cycles were done twice in Canada and once in Europe. But those failed,” says Anthony. India, according to him, leads the world in technical expertise in the field of surrogacy—a fact seconded by Dr Nayna Patel.

Patel says India is the most favoured destination as it has quality medical skills, transparency and there are fewer vices as compared to other parts of the world. Cost is also important, she says, but not as much or else people would be going to Mexico, which is offering surrogacy services at similar rates. Patel, who shot to limelight after she appeared on The Oprah Winfrey Show, is baffled by the ICMR diktat. One bad decision and thousands of surrogates will suffer, she says. Exploitation of surrogates seems to have prompted ICMR’s decision to bar foreign couples from opting for surrogacy. Patel, however, says a third party has no right to say that these women are being exploited. “It is said that there is exploitation in Mumbai’s glamour world. So, go and stop it,” she says. She fears that this could just be the beginning, for in future they might even ban egg donation. That a section of people with certain ideologies are opposed to egg donation is a known thing.

“Where is the question of exploitation,” asks Trupti Rajput, 31, a surrogate. “Foreigners have kept good relations. They keep sending photographs of the kids at regular intervals.” A commerce and law graduate, Trupti took up surrogacy so she could buy her own house. Eight years ago, she delivered a baby girl for a New York-based couple. A mother of two, Trupti got 12.5 lakh then and a gift of 11.25 lakh. She now works as a coordinator at Patel’s surrogate home.

Pushpa Parmar, 26, has a daughter and son, aged 4 and 2, respectively. Her husband, Mahendra, who works in a tobacco field, earns 1100 per day; she would earn 150. She gave up her field job to rent her womb to an American couple. This will fetch her 14 lakh. She will also receive 14,000 per month during her pregnancy. “Is this [surrogacy] exploitation or is it getting a meagre 150 per day by working in a tobacco field?” she asks. A surrogate earns anywhere between 14 lakh and 16 lakh per pregnancy.

Surrogacy for foreigners can’t be stopped immediately as it can pose medical threats for couples undergoing treatment, says Dr Manish Banker, an IVF specialist from Ahmedabad, who was part of the team that drafted the ART (Regulation) Bill, 2014. He does not see any logic in the ICMR decision and says the details in the communication received are vague, especially on NRIs and persons of Indian origin. The decision should have been taken after consulting experts, he adds.

The fertility industry apart, ICMR’s decision could also affect allied services like the hotel industry. “If foreigners are not encouraged to come to India, it will certainly affect our business, though in a small manner, because they do not come here for a day or two. They stay for two to three months [for the procedure]. They also bring in foreign exchange,” says Manohar Gurung, vice president of Madhuban Resort & Spa in Anand.

Nirmala Odedara, a middle-aged woman who supplies tiffins to surrogate homes in Anand, too, doesn’t want the foreigners to be stopped. 7 11, a garment store near Patel’s clinic, has been doing steady business, thanks to the demand for imported baby products and breast pumps. The store has an annual turnover of nearly 11 crore, 50 to 60 per cent of it from foreigners, says manager Vishal Patel.