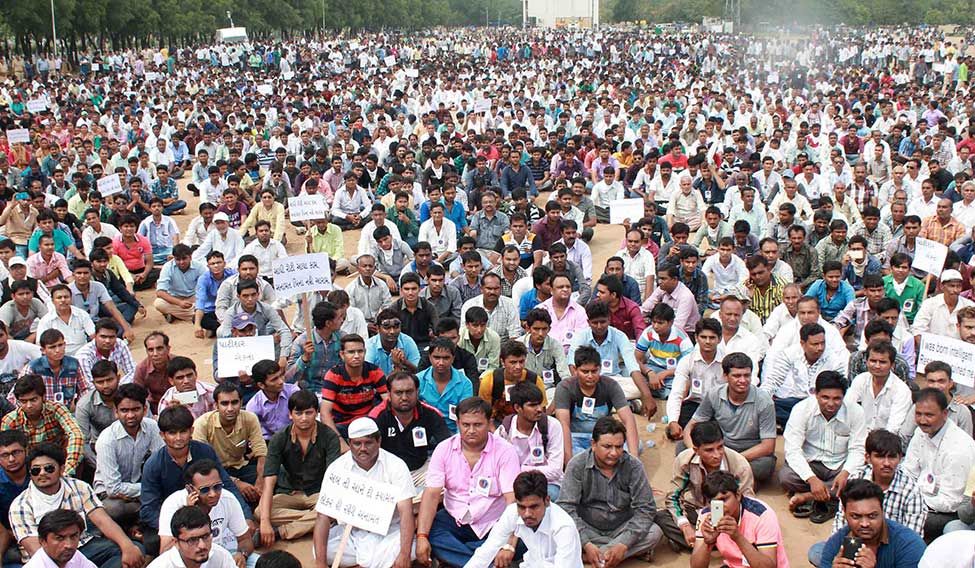 Patels’ demand for OBC reservation spells trouble for the BJP

With the elections to local self-government bodies only a few months away, an agitation by the Patels, one of the most powerful communities of Gujarat, has caught the ruling BJP unawares. What began on July 6 with a rally in north Gujarat by the Patels, demanding reservation under the Other Backward Class (OBC) category, has snowballed into a major crisis for the saffron party. The Patels have been a solid vote bank for the BJP, and the issue has reportedly reached Prime Minister Narendra Modi. The state government has also invited the agitators to come forward and hold talks.

The Patels constitute 14 per cent of Gujarat’s six crore population. The 182-member state assembly has more than 50 Patels and the state, since its formation in 1960, has had three Patel chief ministers. The Patels have traditionally dominated the cultivation of cash crops and the diamond polishing industry and have a significant presence in the education sector. The expatriate Patel communities, especially in the US and the UK, are influential and have been ardent supporters of Modi.

Hardik Patel, convener of the Patidar Anamat Andolan Samiti (PAAS), which is spearheading the agitation, said people saw only one side of the story. Although he did not have any data to back his claim, Hardik, 22, said the Patel youths were suffering because of the reservation policy.

The Samiti has held more than 16 rallies in different parts of the state and plans to hold many more, the biggest of them in Ahmedabad on August 25. Hardik said he was sure of winning over the support of the entire community by the end of the month.

The Samiti is using the BJP’s membership campaign method of registering support with a ‘missed call’ to a designated mobile number. It said more than 30 lakh people had so far assured their support.

Chirag Patel, a supporter of the cause, said his younger brother, Nilesh, could not find a proper job because he was well past the cut-off age by the time the recruitment freeze was lifted in Gujarat. Those falling under the OBC quota, however, were not affected as much because of the relaxation in the age criterion.

The Samiti has found support from several political leaders. Prahlad Patel, the BJP MLA from Vijapur, wrote a letter to Chief Minister Anandiben Patel in support of the movement. “At a time when education has become costly after the BJP came to power, the Patel youths are finding it difficult to get jobs, even after getting education. Many of them are selling off ornaments belonging to their parents,” Prahlad told THE WEEK. He said no schemes were in place for the Patel youth, although industrial houses got land at cheap rates. He said if the Patels’ demands were ignored, it could affect the electoral fortunes of the BJP. 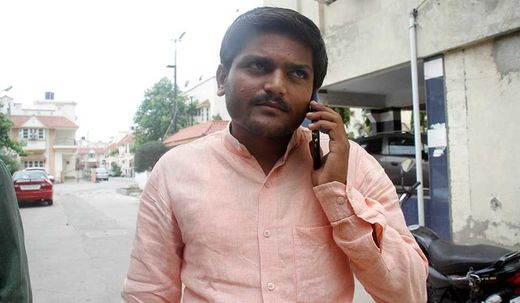 The fight is on: Hardik Patel | Janak Patel

Chirag said not all Patels were rich, but they were all proud people. “Recently, a programme was organised to distribute household goods to those suffering from the floods in Amreli in the Saurashtra region. Not a single Patel accepted the help,” he said.

Interestingly, the ongoing agitation is in stark contrast to the one organised by the Patels in the mid-1980s, against OBC reservation. Hardik said times had changed, and so had the views. “The youths have realised that reservation is here to stay, so why not get its benefit,” he said. Ahmedabad-based sociologist Gaurang Jani said that though OBC reservation was limited to 27 per cent and as many as 146 communities were listed under the category, the Patels, with their high level of education, would reap more benefits. “Moreover, they have had education. Otherwise, how come so many Patels have become doctors and engineers?” he asked.

Political observer Achyut Yagnik, however, said that there was no foundation to extend reservation to the Patels. “They have been a dominant community since freedom movement.” He said he had a hunch that the agitation was part of internal politicking within the BJP.

Not all Patels support the cause. Educationist Nandita Amin said the demand for reservation was completely unjustified as the Patels were quite enterprising. Most of them had a family member or two abroad.

Sources said the agitation was getting favourable response from every region of the state, especially north Gujarat and Saurashtra. It started in north Gujarat possibly because the Anjanas, a subcaste of the Patels, which enjoyed reservation under the OBC category, dominated the area. Other dominant subcastes like the Leuvas and the Kadvas felt that they had been left out.

The BJP leaders in the state are reluctant to speak publicly on the issue. Their state president R.C. Faldu said in a recent meeting of party workers that as per the Supreme Court guidelines, reservation could not exceed 50 per cent. But sources in the BJP said a majority of the Patel MLAs, including ministers, were in support of their community, but did not want to come out in the open. And if the agitation gathered momentum, it could affect the BJP adversely in the local elections, leading to a demand for the chief minister’s ouster. In 2001, Modi replaced Keshubhai Patel as chief minister after the BJP lost a couple of seats in the byelections.

A section within the BJP, however, believes the Congress is fuelling the agitation, in view of the elections. With the rallies turning successful, there are questions about the movement’s funding. While Hardik said the expenses were managed at the local level, there were allegations that certain temple trusts were funding it.

With their numerical strength, the agitations could get out of hand. “Currently our agitation is on Gandhian lines, but we are ready to take it forward on the lines of what Bhagat Singh did,” said Hardik.

More worryingly for the BJP and the government, those who belong to the OBC category oppose the Patels’ demand. And, this would divide the BJP’s very own ‘united Hindu’ theory.

Rallying cry
* Patels are among the dominant communities in Gujarat, comprising 14 per cent of the state’s population. Chief Minister Anandiben Patel, state BJP president R.C. Faldu and six ministers belong to the community.
* There are 146 notified OBCs in Gujarat, including PM Narendra Modi’s modh ghanchi community. The last one to be added to the list was darjis (tailors).
* Anjanas, a subcaste of the Patels, too, belong to the OBC category. Other influential Patel subcastes like the Leuvas and the Kadvas now demand reservation. They are in the forefront of the rallies organised by the newly formed Patidar Anamat Andolan Samiti, an umbrella group of 96 Patel organisations, demanding reservation.
* More than 16 rallies have been held across the state, so far. Some of them have turned violent. More rallies are planned.
* With the agitation spreading across the state, there were reports that Modi and BJP president Amit Shah have demanded reports on the issue, especially in view of the upcoming local polls.
* The BJP has accused the Congress of fomenting trouble.