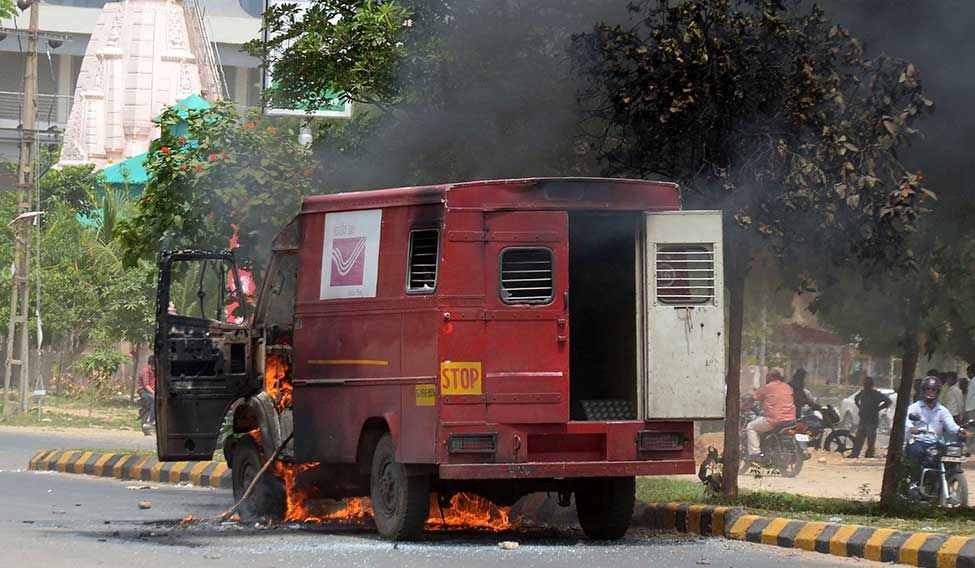 Raging fire: A vehicle torched during the clashes in Ahmedabad | Janak Patel

The BJP will have a tough time pacifying the Patel community

Two months ago, Hardik Patel, 22, was a nobody. Hailing from a middle-class Patidar family in Viramgam near Ahmedabad, he had passed BCom with less than 50 per cent marks. He and his father ran a small shop selling submersible pumps in Ahmedabad.

In July, Hardik floated the Patidar Anamat Andolan Samiti (PAAS) and launched an agitation to “protect the interests” of Patels, a politically and economically influential community that constitutes 14 per cent of Gujarat’s six crore people. At its inaugural rally in Visnagar on July 6, PAAS demanded that the Patel community be given reservations in government jobs and education under the other backward class (OBC) quota. The demand struck a chord with the youth belonging to the community, who felt aggrieved at the high cost of education and job reservations for backward classes. Through social media, Hardik began reaching out to them, and protests organised by PAAS began gaining momentum.

Since its inception, PAAS has organised more than 150 protest rallies across the state. And Hardik has become the face of the agitation. When he called for a “mega show of strength” in Ahmedabad on August 25, the government responded by waiving fees for using the GMDC ground as the venue and not collecting toll from those converging in the city.

Other backward communities, however, objected to the Patel community’s demands for OBC status. Tensions rose ahead of the rally on August 25, and the government took precautions to prevent any untoward incident.

But it failed miserably. The protesters took out a rally to the district collector’s office and there were reports of clashes between Patels and members of other backward communities. Police detained Hardik, who was sitting on an indefinite fast after the rally, and beat up his supporters and journalists. Hardik was released in less than an hour. But, by that time, the situation had spun out of control. His arrest sparked violence across Ahmedabad, with Patel community members clashing with the police, torching buses and destroying public property. Six people died in the violence. Curfew was imposed in several parts of the state and the Army was called in to restore normalcy. The Army even conducted a flag march in Ahmedabad, which witnessed a curfew for the first time since 2002.

The clashes have driven a wedge between the Patel and backward communities. With elections to local bodies due later this year, the political fallout from the rally is certain to affect the BJP. Two leaders in north Gujarat have already resigned from the BJP in protest of the police action.

The momentum that the Patidar agitation has gained has given rise to rumours that it may have had the silent backing of Prime Minister Narendra Modi, as he would perhaps want reservation system to be reviewed. But BJP sources told THE WEEK that it was unlikely, because the Bihar elections are round the corner. A Congress hand and blessings of Chief Minister Anandiben Patel’s competitors within the government and state unit are also suspected. For his part, Hardik has maintained that the Patel community’s struggle was not against a particular government or any caste.

What is worrying for the BJP is the absence of a strong leader like Modi who can pacify Patels and other communities. In fact, the mass support the agitation has been drawing has rattled many party leaders. What remains a mystery is the source of funding for organising the protests. Sources said that at least Rs100 crore could have been spent for the massive rally in Ahmedabad.