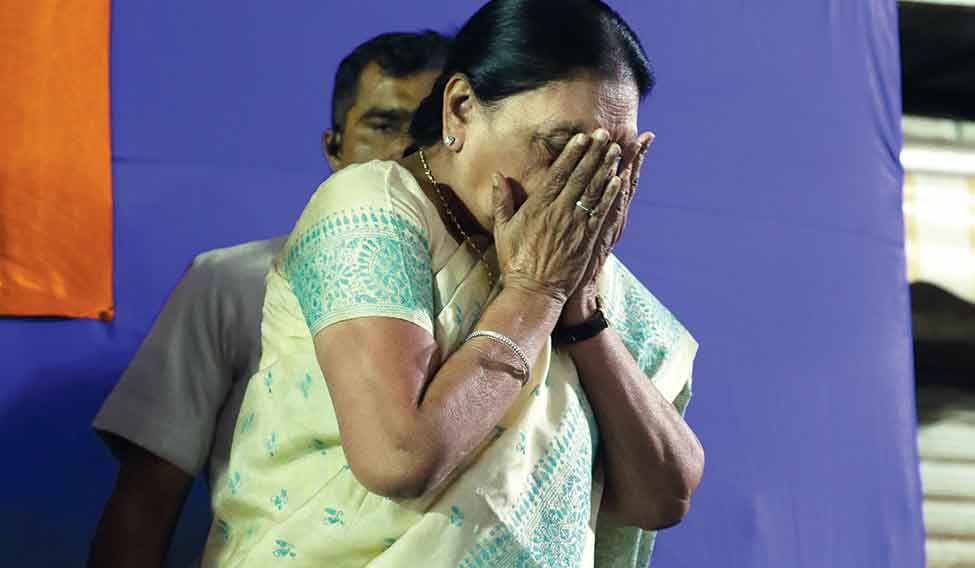 Loss of face: For Chief Minister Anandiben Patel, the challenge is to ensure that the party's poor electoral performance is not repeated in the assembly polls.

It was a bittersweet victory for the ruling BJP in Gujarat in the civic polls held last month. The party won all six municipal corporations and 42 of 56 municipalities. But in district and taluka panchayats, the tables were turned.

The Congress ended the saffron sway in rural areas, winning 24 of 30 district panchayats and 132 of 230 taluka panchayats. It also increased its strength in the urban civic bodies and won ten municipalities, adding four to its 2010 tally of six. The Congress is ecstatic that it has tasted victory after nearly 20 years in BJP's model state, where Prime Minister Narendra Modi was chief minister for 15 years.

For the BJP, the agitation for reservation by the Patel community, which comprises 14 per cent of the state’s 6.5 crore population, could not have come at a more inopportune time. Also in Modi's absence, there was not a single acceptable mass leader other than Chief Minister Anandiben Patel. Moreover, lack of development, especially in the rural areas, hit the BJP hard. The Gujarat model of development, which critics describe as a model in which there is a jobless growth and small and medium industries are dying, contributed to the BJP’s slide. A few other factors were crop damage owing to cyclone and meagre compensation and the government's failure to provide minimum support price to farmers.

Ahead of Modi’s trip to the US, the government had announced a scheme for the economically backward sections, including the Patels, which quelled the Patel agitation to some extent. But the arrest of the young leader of the agitation, Hardik Patel on sedition charges and the government's failure to take action against policemen who assaulted Patels during the agitation had angered the community. A BJP leader—a Patel—from central Gujarat said the Patels voted against the BJP to teach it a lesson. Political analyst Vishnu Pandya said the BJP failed to answer the questions raised by the Patel community. “It was in a dilemma as to what to answer. This divided the community,” he said.

State BJP spokesperson Harshad Patel, however, dismissed all such analysis. “Local factors [like candidates] overshadowed the development work carried out by the party,” he said.

The electoral victory, even if at a local level, was a morale booster for the Congress, which had not won a single seat in the last Lok Sabha elections. After taking charge as state president in March, Bharatsinh Solanki first changed the composition of the Gujarat Congress Committee, bringing middle class members to the fore. This didn't go down too well as critics said the Congress had dumped the KHAM (Kshatriya, Harijan, Adivasi and Muslim) theory propounded by his father, Madhavsinh Solanki, a former chief minister. However, holding meetings and marches across the state, the party highlighted what it termed as the BJP’s failures. “We succeeded in our campaign, and given the results, we feel that Gujarat is anti-BJP,” said Solanki. “We succeeded in conveying to the masses that the BJP is anti middle class.”

For the BJP, the challenge is to ensure that this election was not a foretaste of the 2017 assembly elections; for the Congress, it is to prove that its victory was not a fluke.