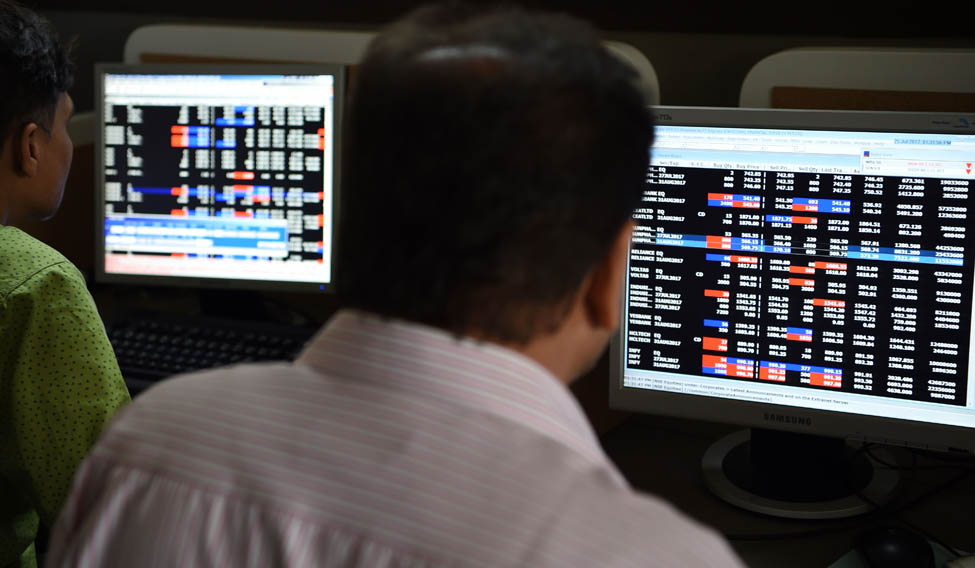 India's equity markets shrugged off lower economic growth and benchmark indices rose 0.5 per cent on Friday on hopes that the Reserve Bank of India may cut key interest rate in its next monetary policy meeting in October after India's GDP growth slipped to 5.7 per cent in the April-June quarter.

India's factory output expanded in August, the Nikkei/Markit Manufacturing Purchasing Managers' Index (PMI) rising more than three points to 51.2 from 47.9, the biggest one-month jump in three years, which also drove market expectations that the worst may be over for India's economy impacted by demonetisation and uncertainties before the rollout of the Goods and Service Tax.

Friday's rise helped the equity markets end in the green for the third straight week; the Sensex gained 1 per cent and the Nifty rose 1.20 per cent.

“India’s manufacturing PMI moved back into the expansion zone in August, led by a rise in domestic orders and output, suggesting that disruptions related to GST seen in June and July appear to be getting resolved. Given that the Q2 GDP disappointment was mainly due to GST effects on the manufacturing sector, this is good news as cash-intensive services sectors have already started to recover,” said Sonal Varma, chief India economist at Nomura Securities.

Varma further added, “We remain comfortable with our view that growth is headed higher and we expect real GDP growth to average 7.4 per cent year-on-year in the second half of 2017 from 5.9 per cent in first half as the economy recovers from the last nine months of disruptions.”

Foreign institutional investors were net sellers in August, pulling out Rs 14,293 crore from equity markets last month, although they have net invested Rs 44,221 crore so far in 2017, compared with Rs 20,568 crore invested in the whole of 2016.

Domestic institutional investors meanwhile have continued to pump in large sums in the equity market, on the back of strong fund flows in mutual funds.

The huge liquidity in the market will support the equity markets from any major correction, say market analysts.

“The GDP numbers were expected to be weak due to demonetisation and the pre-GST worries...But the biggest factor driving markets right now is liquidity; every month Rs 5,000 crore is coming in mutual funds through SIP (systematic investment plan). Last year, FIIs invested $8 billion in India, this year FIIs and DIIs have invested twice that till August, so the markets will continue to find support,” Arun Thukral, MD and CEO of Axis Securities, told THE WEEK.

On Friday, Dr Reddy's was the biggest gainer; the pharma major surged 10 per cent after it won a judgement in a patent infringement case in the US. The US District Court of Delaware ruled that the company's proposed generic version of Suboxone sublingual film (indicated for maintenance treatment of opioid dependence) doesn't infringe US patents as asserted by Indivior.

Automobile stocks also accelerated on Friday after reporting strong wholesales in August. Tata Motors and Bajaj Auto rose near 4 per cent, Maruti Suzuki was up 1.4 per cent and Hero MotoCorp gained 1 per cent.

Asian Paints, Axis Bank, Sun Pharma, Infosys, ITC and Larsen & Toubro were among the other gainers.

Looking ahead, Thukral said global developments—the unwinding of stimulus by US Federal Reserve, North Korea's missile tests—do remain a risk. But, an expected pickup in earnings growth this year will drive the domestic markets further.

His advise for retail investors is that every fall in equity markets should be used as an opportunity to buy quality stocks.

Thukral is particularly bullish on stocks having exposure to rural economy, which he expects should do well on the back of two good monsoons and the effects of demonetisation behind us. He is also positive on consumer goods companies, private banks and non-banking financial companies.

Your form could not be submitted.
This browser settings will not support to add bookmarks programmatically. Please press Ctrl+D or change settings to bookmark this page.
Topics : #sensex | #nifty