I almost started laughing as I wrote the last few words. Thirty years into this game, I’m still often confused when I begin, I’m not sure of how I should say what I want to say, and halfway through something I’m writing, I begin to see a new form emerging: the poem that wants to emerge from the prose, the short story that is thrusting itself into a novel, the novel that is falling into a series of notes about people, the essay that has become a series of rather boring rehashes of other people’s thoughts…

I still write far too many words for everything I do. And, there are times as I am pruning a piece when I think: “Oh, that’s an idea I could use some other time; I could develop it.” And so I cut it out and put it into another file. A few weeks later I look at this file and realise that I have said what I wanted to say in those twenty-five words; there is nothing more to be said and that is on a good day. On a bad day, I gasp at my own idiocy and my pomposity and delete the whole thing.

Ranjit Hoskote, a fellow-poet, once told me that he puts down the phrases and images that occur to him and he often works them into poems. I thought this was a good idea so I began to do the same. I carried around a little book, the size of my palm, the kind in which my Granny would keep her account with the dhobi and I would assiduously make notes. Ten years later, I stopped doing this. I had several of these books by then, and thousands of notes, but not one of them ever blossomed into a poem. They remained resolutely the flotsam and jetsam of my mind.

When I was writing the third-last draft of my first novel Em and the Big Hoom, I did it in longhand, adding a thousand words a day for three years. I had several hundred thousand words at the end of this, which I cut down into a novel of about 60,000 words. 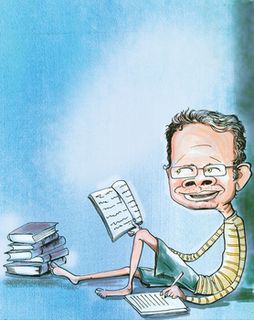 I remember looking at the pile of notebooks and thinking: “The next novel has to be in there somewhere.”

The next novel was not.

The outtakes, I find, have been taken out for a good reason. They’re just not good enough. The stuff I cut out is likewise just not good enough. That may well be the thing about words: you can’t recycle them. They come into the world and they begin to work their magic. They influence behaviour. They shape our view of the world. They urge us to battle or discipline us to make peace. They contain most of what we know of morality and ethics; some of it is in the gut, some of it is in the heart, but most of what we know of Right and Wrong, we were told and we were generally told in words.

And, yet all the words we use are old. All of them are recycled. We heard them, we absorbed them, we put them out again. We know how easy they are to misunderstand. A rose is a rose is a rose? Pace, Stein and Abelard. But we know that a rose as a symbol is a generative organ of a plant, is a glorious testimony to careful breeding, is a luxury item, is a cliché. My rose is not your rose.

Take the word love. I love dosa for breakfast. I love my mother. I love my nation. I love God. I love a good massage. I love you. You can see that in each of these sentences a completely different part of the brain and the heart and the spirit are being reached. And, yet, English, the language which has arguably the largest vocabulary, has only one word for love. There are many, many more words for love in Urdu; this has not stopped people from loving it to death in India.

But, let’s not get started on language. That’s different, right? Right?

Pinto is a reluctant traveller with itchy feet.