Our time is now 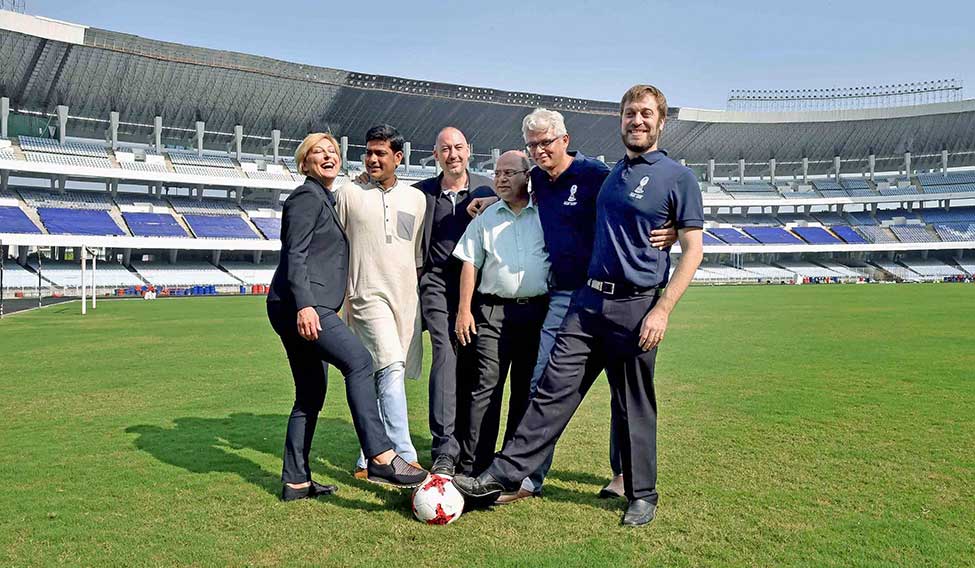 Football takes over: (From right) Javier Ceppi, Joy Bhattacharjya and other officials at the announcement of the fixtures in Kolkata | PTI

Hosting a FIFA tournament is India’s first stride towards becoming a football nation. How prepared are we and how will we benefit from this venture?

Where you encounter a cow, in India, often implies something. If it is at a temple, it is a symbol of worship. If it is on your plate, you are an anti-national. And, if it is on a football ground, we question our preparedness to host a world cup.

As India gears up to host its first-ever FIFA tournament, a herd of cows was pictured, in June, grazing at the Fort Kochi parade ground—one of the practice venues for the event. Thankfully, there were no consequences as the ground is a heritage site that cannot be permanently fenced. The FIFA Under-17 World Cup (October 6 to 28) has the international football body going the extra mile to ensure that the six host cities do not slip up.

Sporting events of this size leave lasting legacies, especially on the host country. Yet, it is the legacy of one such event that has marred India’s credibility as a host—the 2010 Commonwealth Games. Rampant corruption, financial deficit, labour law violations, substandard facilities, empty stands and a nightmarish Games village led to India losing out in the race to host several tournaments, most notably the 2014 and 2018 editions of the Asian Games.

India was then given a fresh lease of life, when it won the bid to hold this year’s FIFA youth event. The six cities—New Delhi, Mumbai, Guwahati, Kolkata, Margao and Kochi—will get to watch budding stars of 24 countries in action.

Besides stadiums, each city has developed four training grounds, one for each team. To meet lofty standards set by FIFA, each stadium and ground has had to undergo numerous changes, some even to the extent of being entirely rebuilt. 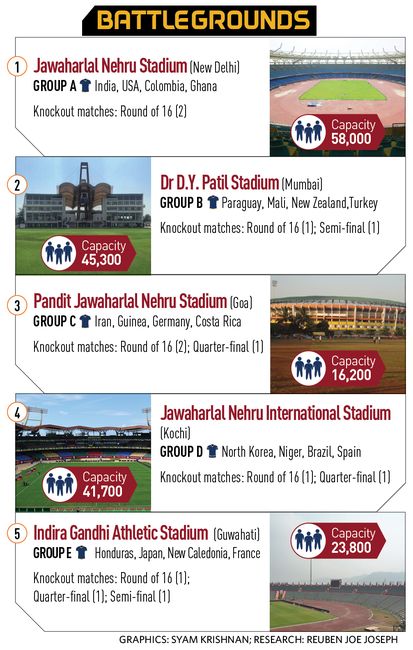 The renovation was tardy last year but eventually picked pace thanks to the persistence of Tournament Director Javier Ceppi. “Although we have to take over the stadiums only 10 days before the start of the World Cup, we have already taken over the maintenance of all the fields of play to ensure that they are at a very high level,” the Chilean national told THE WEEK.

With the core infrastructure completed in all cities, work on other ground facilities and ex-stadia beautification are under way and expected to be completed much before the deadline.

Installation of numbered bucket seats—as against the free-seating on concrete floors—was the most common change at all stadiums. It is mandatory for FIFA tournaments, though it reduces crowd capacity. Stringent fire-safety norms, world-class media centres, clean toilets (a rarity at Indian stadiums) and proper dressing rooms were other major requirements.

There is another key addition. Ceppi said they would introduce the concept of stewards at the stadiums, as in Europe. This will reduce the onus on the police for crowd control and safety. The organising committee is also trying to make the tournament a public-transport-only event, to reduce traffic congestion.

The cities were given a March 31 deadline to complete the core infrastructure work. Of the six venues, FIFA was most impressed with Guwahati. Anand Prakash Tiwari, nodal officer at Guwahati, said FIFA officials were amazed by the popularity of the sport in Assam and the work carried out. “It was the 360-degree projection of the tournament’s benefits on the city that worked as catalysts for local organisers to meet FIFA deadlines,” said Tiwari. “The atmosphere on game days is sure to reflect the Northeast’s passion for the sport.”

At Kolkata, the Vivekananda Yuba Bharati Krirangan stadium, which will host the final, had a complete facelift. About Rs 120 crore was spent on changes, including revamping the stands, replacing the artificial turf with natural grass from the US, and building two new practice grounds within the premises.

The D.Y. Patil stadium in Mumbai and the Jawaharlal Nehru stadium in New Delhi did not require many alterations. India’s group matches, initially scheduled to be in Mumbai, were shifted to Delhi to increase crowd turnout at the capital. Delhi, though, will not host any games after the round of 16, to avoid the post-Diwali pollution.

With the stadium at Margao having been prepped to host the U-16 AFC championship last year, the city required little attention.

Kochi, in contrast, was the only venue that had shocked the inspection team for the slow pace of work. P.A. Mohammed Hanish, the nodal officer at Kochi, blamed it on the lack of coordination at the helm of the Greater Cochin Development Authority, the change of government in the state and delay in tenders. Sports Minister Vijay Goel, who visited the venue in April, sent out a stern warning, saying he would visit again to play on the turf himself. Later in May, Ceppi announced that the core infrastructure at Kochi was finally ready.

The World Cup’s project director, Joy Bhattacharjya, told THE WEEK: “We live in a country where the government machinery operates on huge delays. Nobody’s neck is on the block, and so we had to start very early to make sure there were no problems.”

There were other obstacles organisers had to circumvent. “[India has] a state structure, in which different states have different systems in place,” said Ceppi. “What works in one does not necessarily work in the other. Trying to reach the consistency needed between all the venues is something that takes more time.”

In their race against time to please inspection teams, Ceppi said, some states were not only looking at this event as an opportunity to develop sports infrastructure, but also to make changes to other aspects like hygiene and cleanliness, transport, roads, landscaping and public lighting.

The Central government had sanctioned Rs 95 crore for infrastructure development and Rs 25 crore for the opening ceremony and contingencies. The amount spent by the states vary, but put together, it is said to be at least Rs 200 crore. Cosmetic changes to stadiums and beautification of the surroundings are not included in the sports budget, which makes it hard to put an exact figure.

But how does India benefit from such investment? Bhattacharjya said that watching FIFA operate was an eye-opener. “Organising an event like this creates an amount of expertise among various groups of people. For instance, the training and technique that was shared with many maalis to be effective groundsmen will help in the appropriate maintenance of football fields across the country.”

Bhattacharjya said that the dearth of proper facilities to host football competitions had now been addressed. Each ground has now got two dressing rooms, floodlights, top-quality turfs and galleries.

It may have taken time, but FIFA is satisfied with India’s arrangements. The All India Football Federation has, to that effect, submitted a bid to host the 2019 FIFA U-20 World Cup, which its president Praful Patel said was the “next logical step for the development of football”.

Indian officials are convinced that FIFA has grand plans for the country. The second-most populous country is, after all, a massive market for the international body. “They support us in a lot of ways and we are sure that this tournament will make the world aware that India can hold a FIFA World Cup,” said Bhattacharjya. “It is time for India to say that it is a football country.”