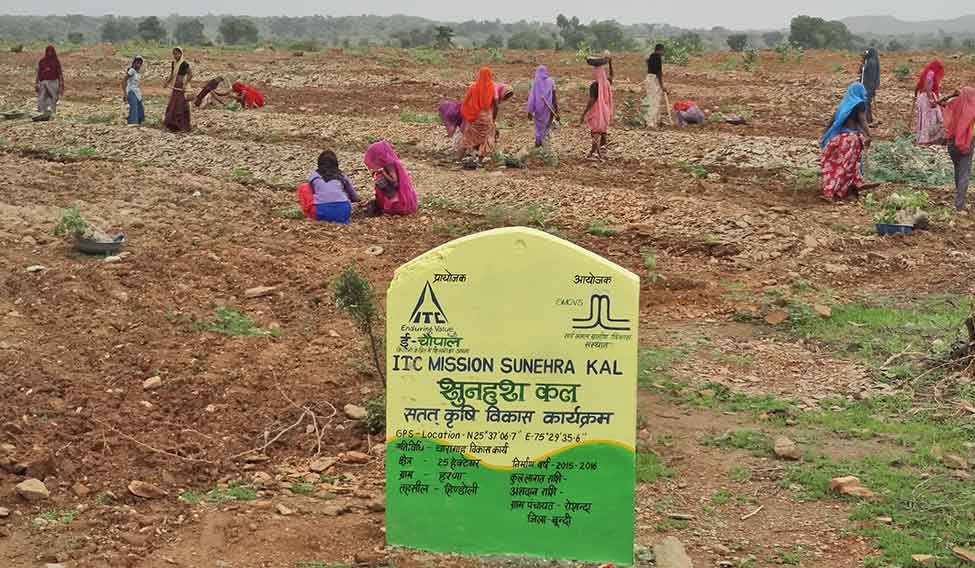 Field work: A pasture under development in Harna village, Rajasthan.

Bhanpura, some 200km from Bhopal, is home to Hindu Singh, a 64-year-old farmer. His family is among 77 families in the village that thrive on agriculture. Singh comes from a family of landholders. With each generation though, the size of the land decreased, and Singh was left with five acres. With a family of five to feed, Singh also rears cattle.

Till three decades ago, says Singh, the harvest was good, thanks to regular rainfall and good moisture levels in the soil. But as the population grew, trees were felled to bring more land under cultivation. That was the biggest mistake our parents made, says Singh. A depleted green cover affected crop production. The land that was used for cattle grazing, too, started vanishing. It became difficult to rear cattle as stall-feeding was too costly.

“We did not have any place left in the village where we could graze our cattle,” says Singh. “The final blow came in 2002 when the Madhya Pradesh government decided to distribute the remaining village common land to poor scheduled caste families. It was only in 2007 when ITC [Limited] chose Bhanpura under its 'Mission Sunehra Kal' that things changed.”

'Mission Sunehra Kal' is a social investment programme of ITC, in collaboration with state governments and NGOs, in areas from where it procures grains. “Under this programme, we try to revive the good old practices that are dying, and introduce new interventions in rural lives to augment incomes and lifestyles of villagers,” says Giresh Mohan, regional manager of ITC, who is in charge of corporate social investments.

Bhanpura is one of 226 villages in Madhya Pradesh, Rajasthan and Maharashtra where around 5,000 hectares have been successfully restored for village common use under the programme. “While in some villages we have supported farmers to rejuvenate irrigation facilities, strengthen dairy farming and create watersheds for groundwater charging, in some [others] we have helped people to restore village common lands,” says Rajnikant Rai, COO of the company's agri business division.

Common village land or commons, explains Mohan, are the land resources, like foraging and pasture land, within the boundary of a village formally held by the panchayat or a community in the village. “Common lands in India have played a vital role in supporting the village economy,” says Rai. “They provide a wide range of products and services to poor, marginal and small landholders, ranging from provisioning services such as fuel, food, fodder and timber to regulating services such as maintaining the hydrological cycle, water recharge, sink for greenhouse gases, erosion control and maintaining soil fertility, which have a significant bearing on climate change mitigation and adaptation.”

The modus operandi to revive these commons is simple, says Mohan. “The ITC and partner NGOs engage with villagers through traditional governance structures such as panchayats and religion-based informal groups,” he says. “These members are then organised into village development committees. They are trained and incentivised to manage grazing, protect forests, build water harvesting structures for recharge and soil conservation measures to reduce erosion.” To protect the commons, a 'social fencing' is formed, which is nothing but people’s will to obey rules and regulations. The produce from these commons is distributed among villagers through benefit-sharing arrangements.