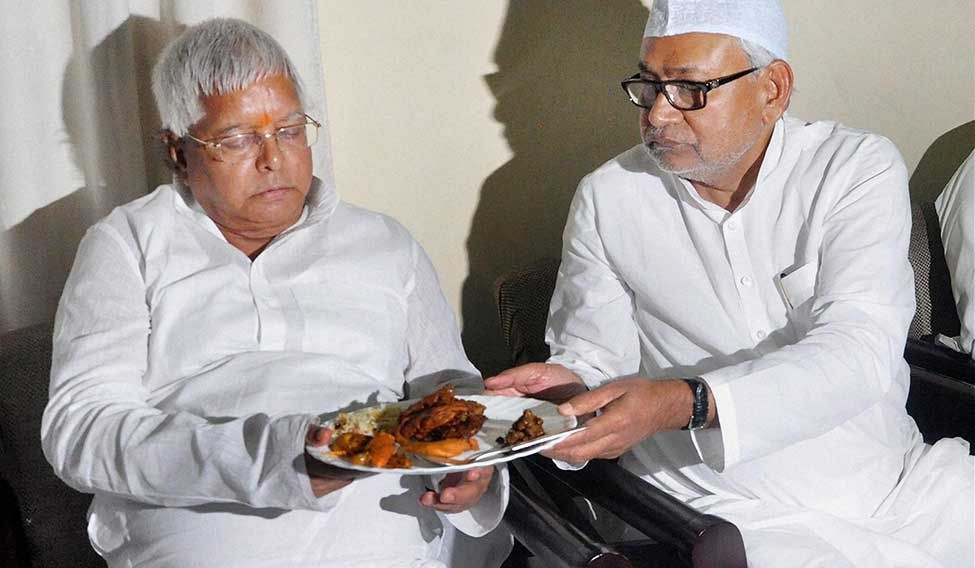 Losing combo: Nitish and Lalu at an iftar party at the chief minister's residence | PTI

The Nitish-Lalu alliance fails to consolidate votes in Bihar

Bihar politics is rather strange. In the run-up to the assembly elections later this year, the alliance of the Janata Dal (United) and the Rashtriya Janata Dal is asking votes for the “good work” of Chief Minister Nitish Kumar and his government. The BJP, on the other hand, is playing the “OBC card”, trying to mobilise backward caste votes in its favour. The irony is that, under Narendra Modi, the BJP’s slogan has been “sabka saath, sabka vikas [together with all, development for all]”, while Lalu Prasad and his RJD have always banked on caste equations.

The results of the recent legislative council elections have come as a shock to the Nitish-Lalu combine, the pivot of the “secular” alliance that included the Congress and the Nationalist Congress Party. While the BJP-led alliance bagged 13 seats, the secular alliance won only 10 seats. One seat went to an independent candidate—a former RJD rebel.

The results gave a jolt to calculations based on caste equations and statistics, which had predicted victory to the "secular" alliance. “The surprise defeats of JD(U) candidates in Madhubani, Saran and Patna districts have shaken the very basics of the alliance,” said political analyst Sanjay Kumar Sinha. “The three districts are the pocket boroughs of Lalu Prasad. Yet, he could not transfer his Yadav votes to JD(U) candidates, which led to the victory of the BJP and the independent candidate.”

Nitish downplayed the election results, saying they were not “directly connected to the masses”. JD(U) national spokesman K.C. Tyagi, however, termed the results “eye-opening”. “There was lack of coordination among us,” he said. “Lalu Prasad had mettle, but there was little management. It was a fatal mistake to ignore the rebels.”

Said Vashisht Narayan Singh, state president of the JD(U): “The results are disheartening, and the party will definitely think it over.”

According to Sinha, the elections to the legislative council were “very representative in nature”, as they had voters from almost every section of society. “The JD(U) may downplay the loss, but the fact remains that it had won 13 seats in 2009, which have now been reduced to just five. The BJP, meanwhile, increased its tally from five seats to 12.”

BJP leader Sushil Kumar Modi, who was removed as deputy chief minister after the JD(U) and the BJP parted ways in 2013, said Nitish’s time was over. “The chief minister, who never used to participate in the filing of nominations for elections, went to file nominations of party candidates. He and his government were working overtime. This was the semifinal before the assembly polls, and we have set the trend.”

Sinha said, “The legislative council polls will not have any direct effect on the state government or its functioning. But it has boosted the sagging morale of the BJP and its allies in Bihar.”

Despite the loss, Nitish and Lalu are carrying on with their political strategy. While Lalu is addressing his core constituencies at district-level meetings, the JD(U) has initiated the “Har Ghar Dastak [knock at every door]” programme to make people aware of the achievements of the state government. Har Ghar Dastak was conceived by poll strategist Prashant Kishor, who was one of the key persons in the social media team behind Narendra Modi’s Lok Sabha election campaign. Kishor, who belongs to Bihar, is also known to be the architect of Modi’s Chai pe Charcha campaign.