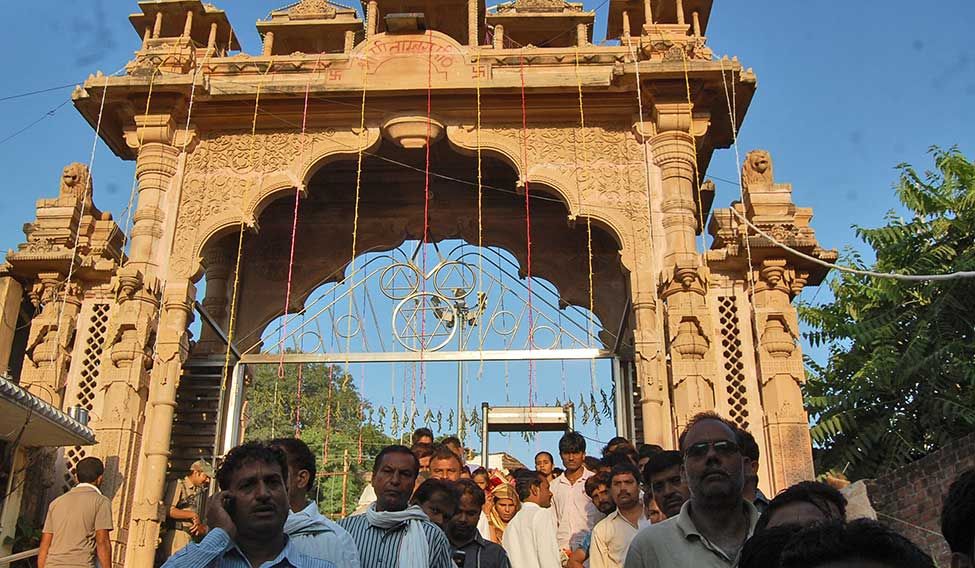 When the opposition parties were baying for her blood over the Lalit Modi scandal, Rajasthan Chief Minister Vasundhara Raje found refuge at Pitambara Peeth in Datia, Madhya Pradesh. She spent three days inside the temple complex performing yagnas.

Political ambitions and controversies have brought many leaders across party lines to Pitambara Peeth, located inside a dusty countryside bazaar. Photography is prohibited here. One has to remove all leather accessories before entering the temple premises—home to several deities. Inside, priests, clad in yellow robes, can be seen sitting cross-legged, chanting mantras.

It is believed that two deities of the temple—goddesses Bagulamukhi and Dhumavati—have powers to grant wishes of those in the field of statecraft and politics. No wonder then, the temple attracts a number of politicians before elections. Special prayers—quiet, continuous chants of mantras called jaap—are conducted by priests, which can go on for months. Following the chanting, a yagna is performed by the devotee.

Prayers here are classified according to the nature of the wishes. For instance, if a leader wants to win or retain power, then an exclusive Bagulamukhi anusthan is performed. There is even a special puja called supari sankalp [contract puja]. “Here, priests perform puja for a politician to politically harm rivals and put an end to their careers or for him to achieve specific goals like becoming the chief minister or prime minister or for some other powerful position,” says Ashok Sharma, a journalist. A top priest associated with the management says leaders ask them to chant 1 lakh to 10 lakh mantras whenever there is a crisis in the country or state.

The Scindias have a long association with the temple. Before Vasundhara took over as chairperson of the temple trust, her mother, Vijaya Raje Scindia, had headed it for almost six decades. In 1967, Vijaya Raje declined to be chief minister after toppling the Congress government. She did not give a reason then. But when in the 1980s she was asked to head the BJP, she told L.K. Advani, according to his book My Country, My Life, that she was advised against accepting any public post by the chief priest of Pitambara Peeth.

Like Vasundhara, many leaders have come to the temple to ward off controversies. Lalu Prasad made a visit when he was facing a CBI investigation in the fodder scam; General V.K. Singh came calling in 2011 during his birth date row. Varun Gandhi performed a special puja a few years ago. He was, perhaps, following in his grandmother's footsteps. Indira Gandhi had visited the temple thrice—once when she was out of power post Emergency.

Pandit Jawaharlal Nehru, too, had requested for a special yagna during the 1962 war with China. “When the yagna was being performed, reports started coming in that Chinese forces were retreating,” says priest Anil Chaturvedi. “A special yagna kund still stands at the place. Prime minister Nehru himself visited the place later.”

Former prime ministers H.D. Deve Gowda and A.B. Vajpayee have also visited the shrine. Union ministers Nitin Gadkari, Rajnath Singh and Uma Bharti and Congress leaders Digvijaya Singh and Jyotiraditya Scindia are long-time devotees. So is Chhattisgarh Chief Minister Raman Singh, who visited the temple in May when his wife was discharged from hospital after a prolonged illness.