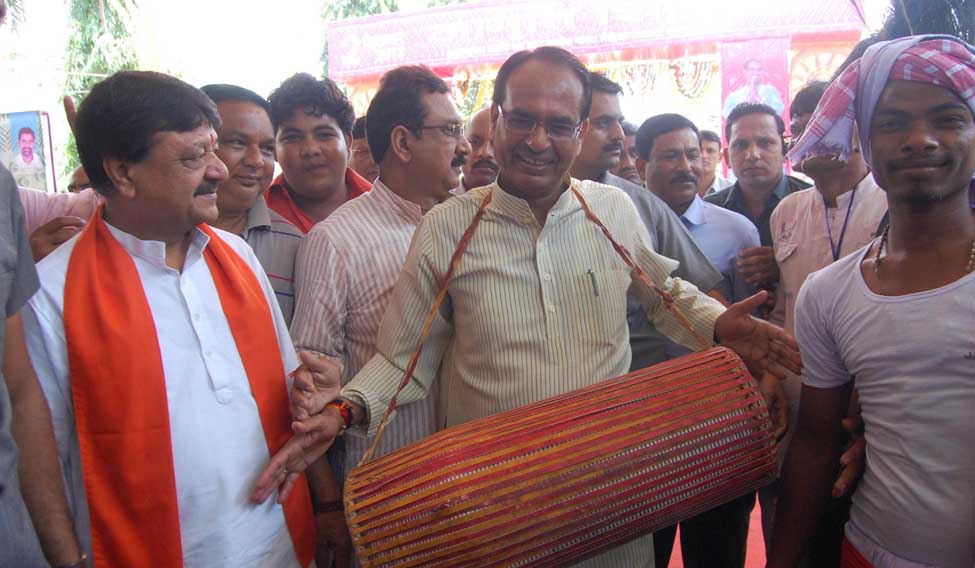 When it comes to food, Kailash Vijayvargiya is very choosy. The Madhya Pradesh urban development minister is a vegetarian who does not eat cereals, and depends mainly on fruits. However, when BJP president Amit Shah offered him a meaty role in the party a week ago, he could not refuse it.

Vijayvargiya's elevation as national general secretary of the BJP seems to have changed the party affairs in Madhya Pradesh overnight. Chief Minister Shivraj Singh Chouhan had full control over the party in the past ten years and he never allowed the rise of another power centre in the state. But Chouhan was stumped this time around, as Prime Minister Narendra Modi himself called him to 7 Race Course Road and informed him about Vijayvargiya's promotion.

The architect of the BJP's impressive victory in the Haryana assembly elections, Vijayvargiya, 59, has a good rapport with Shah. When Shah was not allowed to enter Gujarat after the Sohrabuddin Sheikh fake encounter case, he spent a lot of his time in Vijayvargiya's stronghold Indore, which is close to the Gujarat border. The new general secretary is likely to be given the charge of Uttar Pradesh, where assembly elections are due in early 2017.

The immediate effect of Vijayvargiya's rise, however, will be felt in Madhya Pradesh. Ever since Uma Bharti was removed as chief minister in 2004, the state BJP has been Chouhan's fiefdom. “By appointing Vijayvargiya as national general secretary, the party high command has created a space for a second power centre,” said political commentator Sharad Diwedi.

The timing of Vijayvargiya's appointment also is wily. Chouhan and his family are on the defensive in the Vyapam and mining scams. There has been talk of the party leadership looking for a substitute.

Chouhan, however, is no pushover. A section of the RSS and the BJP projects him as the tallest farmers' leader in the party. He was even mentioned as an alternative to Modi for the post of the prime minister. He is the chairman of a committee of chief ministers under the NITI Aayog, and the prime minister often seeks his suggestions to help farmers in distress. There is also a rumour that Chouhan would be elevated to the national level in an effort to create a second line of leadership.

Madhya Pradesh has a key role in the scheme of things of the BJP and RSS. The sangh parivar thinks a strong party in the state can influence the entire Hindi heartland. Chouhan has been doing a good job and that is why the party leadership did not meddle in the affairs of state after the Uma Bharti episode in 2004. Bharti, who led an unsuccessful rebellion against Chouhan, was dismissed from the party. She was taken back after six years on the condition that she would stay away from the state. Though she has an official bungalow in the posh Shyamala Hills in Bhopal, she is not welcome at Deendayal Parisar, the BJP's state headquarters.

Vijayvargiya's new role, however, is an indication of the changed circumstances. Popular among cadres for his aggressive style of functioning, Vijayvargiya does not shy away from making his intentions clear. “Though I am going to the national level, it does not stop me from coming to my state. After all, my entire politics is here in Madhya Pradesh,” he told THE WEEK. He started his political career as a BJP corporator in Indore. His proximity to the RSS helped him become the mayor in 1990. He survived allegations of involvement in a scam during this period. In 2004, Vijayvargiya was almost dropped from Babulal Gaur's list of ministers as he did not reach Raj Bhavan before the swearing-in ceremony started. But he flew in a training aircraft from Indore to Bhopal and just made it. Though he enjoys the strong support of the party in Indore, he is not on good terms with Lok Sabha speaker Sumitra Mahajan, who has won the Indore seat eight times. Vijayvargiya is said to have nurtured chief ministerial ambitions ever since Uma Bharti resigned.

Union Minister for Steel and Mines Narendra Singh Tomar, a close friend of Chouhan, is also not very happy about Vijayvargiya's rise. A three-time president of the state BJP, Tomar has been looking for his turn in the state and would not like the rise of another power centre.