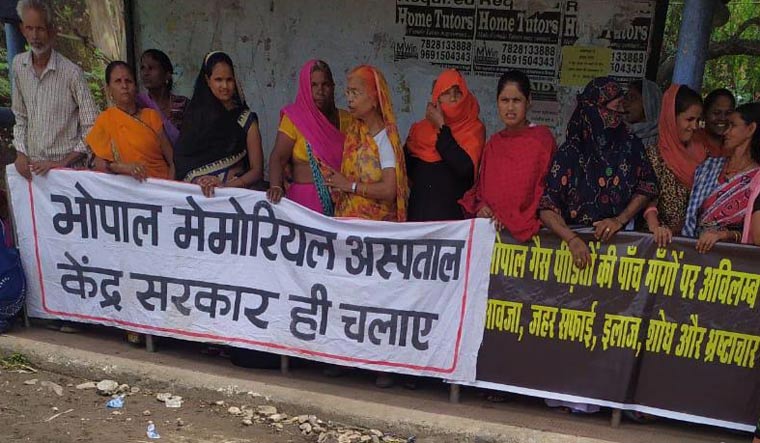 Mandaviya, who also holds the chemicals and fertilizers portfolio, told a delegation of survivors that appropriate medical research on the tragedy survivors and their children will be restarted by National Institute for Research in Environmental Health (NIREH), which was set up for this purpose.

Earlier, about 100 survivors of the gas tragedy gathered before the BMHRC, demanding to meet the Union minister who was on a Bhopal visit on Sunday. A five-member delegation was allowed to meet Mandaviya and submitted a memorandum of their five crucial demands of appropriate compensation, cleanup of the toxic waste on and around abandoned Union Carbide factory, medical care, adequate research on health issues faced by survivors and their offspring, mismanagement of BMHRC and curbing of corruption in the form of misutilisation of funds meant to provide relief and rehabilitation to the gas tragedy victims.

The survivors demanded that the Union government should present correct figures of deaths and injuries on the basis of hospital records of gas relief hospitals and BMHRC and research data of Indian Council of Medical Research (ICMR) in the pending curative petition on additional compensation so that Supreme Court can take a appropriate decision in this crucial matter.

In 2018, the Supreme Court declared the groundwater of 42 communities situated around the Union Carbide factory to be contaminated and unfit for drinking. Recent investigations have also revealed that the groundwater of additional 29 communities adjoining these 42 communities have been found to be contaminated with Persistent Organic Pollutants (POPs). Survivors urged the minister to invite the United Nations Environmental Program (UNEP) who have offered to undertake the crucial job of comprehensive scientific assessment of the depth, spread and nature of chemical contaminants so that appropriate cost of cleanup and remediation can be sought from Union Carbide and its current owner Dow Chemical.

They pointed out that the BMHRC was facing an acute shortage of doctors and specialists, several crucial departments like Nephrology, Oncology, Gastrosu-rgery and Neurology are shut, lack of equipment, necessary tests and often crucial medicines are not available. They demanded that the BMHRC hospital should be merged with All India Institute of Medical Sciences, Bhopal and sought vigilance investigation against BMHRC director for conducting illegal and unethical drug trials on Bhopal gas victims should be brought to a logical conclusion.

They said NIREH was set up in 2010 by the Indian Council of Medical Research (ICMR) in Bhopal to study long-term damage to the health of those exposed to Union Carbide's toxic gases and contaminated ground water and their children. and also provide treatment. However, in the last 12 years no work has been done in this institute for the welfare of gas victims and since the last three years this institute has completely abandoned its original purpose. The survivors demanded a scientific review of the last 12 years of the institute.

The Union nodal ministry of chemicals and fertilisers has been providing funds to the Department of Gas Relief, Government of MP for the relief and rehabilitation of gas victims. However, enquiries by survivors found that in the past 12 years, an amount of Rs 20 crore has been lost to corruption and more than Rs 120 crore have yet to be utilised for the benefit of gas victims till date. They sought a probe by the union government into the matter.