CM, BJP chief dance to celebrate; Chouhan says it is honour of tribals in the state 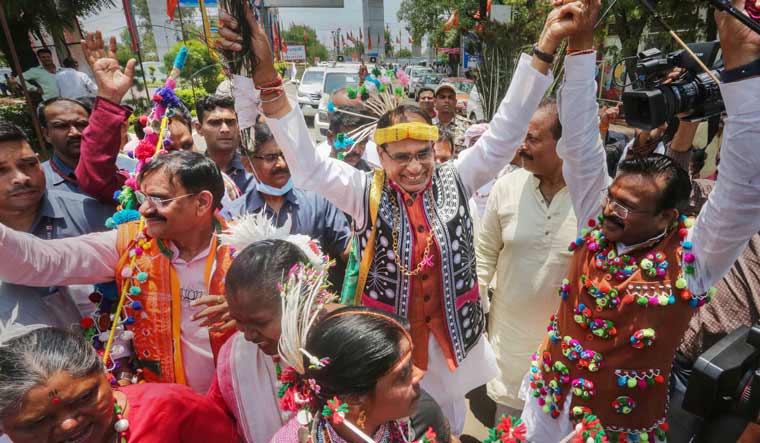 In what is being seen as another attempt to woo the huge chunk of tribal voters in the state, the ruling BJP in the local bodies’ polls-bound Madhya Pradesh turned the nomination of Draupadi Murmu, a tribal, as presidential candidate of National Democratic Alliance (NDA), into a big event on Thursday.

That the event was meant to showcase Murmu’s candidature as a way to woo tribal votes was clear as the chief minister said during the event that the candidature is an honour not only to Murmu, but to the crores of tribal people in Madhya Pradesh and across the country.

“Now a sister from the tribal community will sit on the highest constitutional post of India. She will be the constitutional head of India, chief of the three armed forces and the president of India,” Chouhan said, calling upon the tribal people of the state to sing, dance and celebrate wherever they are, at 12.00 noon on June 24 when Murmu will file her nomination for the post of president of India.

The CM also said that Prime Minister Narendra Modi has done what no one even thought of doing. He said that the programme (on Thursday) was organised to express gratitude to the PM and the central leadership of the BJP for nominating a woman coming from a modest tribal background for the highest constitutional post.

He added that this was not a day to deliver a speech but to sing, dance and celebrate and he also felt like dancing to his heart’s content.

A word of caution from Uma Bharti

Interestingly, BJP leader and ex-chief minister Uma Bharti seemed to take an exception to the event and some statements of BJP leaders and cautioned against seeking political benefits out of the candidature of Murmu. In a series of tweets, Bharti said “The media and our BJP people will have to keep in mind about the NDA candidate for president of India - Draupadi Murmu - that India’s president is the constitutional head of the country and not restricted to any community. Therefore, statements should not be given with an objective of political gains. Making Murmu as candidate for president of India is not a favour bestowed on her, but she is a deserving person.”

Picking up Bharti’s tweets, the chief of media cell of MP Congress, K.K. Mishra tweeted: “Dividing the country has not been enough, now a ‘BJP event’ to divide the president’s post on caste lines. Thank you, sister Uma Bharti, for showing a mirror to the event managers.”

Polls to begin on June 25

The BJP's event assumed importance as the first phase of the panchayat polls in Madhya Pradesh is up on June 25 while two other phases will be held on July 1 and July 8 . Elections are being held for  875 members in 52 district panchayats; 6,771 members in 313 janpad panchayats; and 22,921 sarpanchs and 3,63,726 panchs in 23,013 village panchayats.

Also, 347 urban local bodies including 16 municipal corporations, 76 municipal councils and 255 municipalities will go to polls on July 6 and 13.

The role of tribals, who constitute 21 per cent of Madhya Pradesh population, is crucial in any level of polls in the state. The ruling BJP in the state has been making constant efforts to woo the tribal population after facing a close defeat in the 2018 polls when majority tribal seats in the state went to the Congress.

The local bodies’ polls are being looked upon as semi-finals to the 2023 Assembly polls and therefore the BJP as well as the opposition Congress are putting in their best efforts to secure wins.

The BJP has already launched its poll campaign with the slogan ‘Jeetenge booth -jitegi BJP’ (winning the polling booths will make BJP win) with Chouhan visiting the Mahakaleshwar temple and then addressing a public meeting in Ujjain on Wednesday (June 22). On Thursday, the chief minister addressed a public meeting at Satna while BJP chief Sharma addressed a poll campaign meeting at Singrauli district.

The Congress is slated to start its poll campaign on June 24 with a public meeting of ex-chief minister and state Congress chief Kamal Nath in Singrauli. The Congress has coined the campaign slogan of ‘Aapka Kamal Nath, aapke saath’ (your Kamal Nath with you).