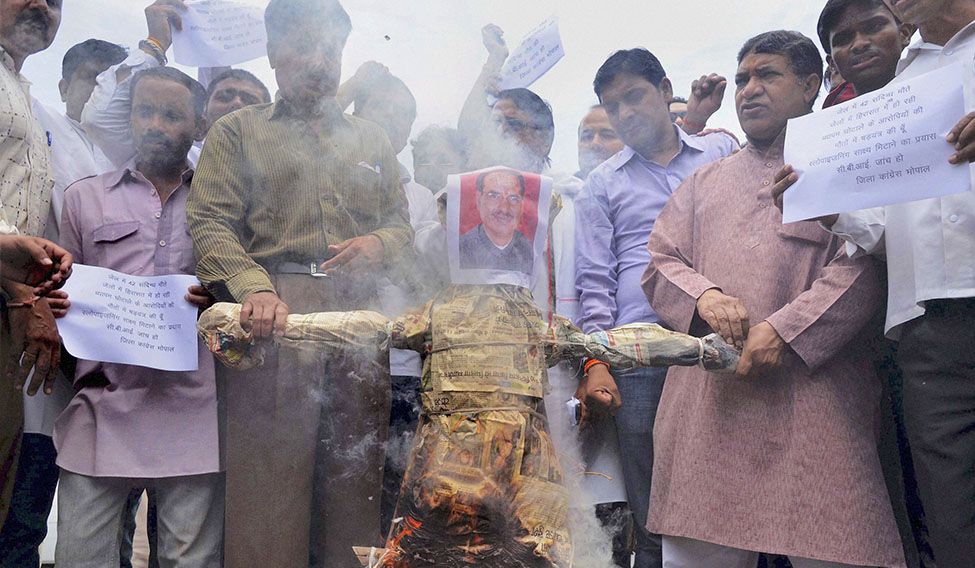 Considering the number of victims, it could rank among the biggest scams in India. Nearly a crore young people, who appeared in examinations conducted by the Madhya Pradesh Vyavasayik Pariksha Mandal (Vyapam) from 2008 to 2013, were duped by the agency. Around 40 people, who were linked to the scam, have lost their lives in suspicious circumstances.

The scam came to light in 2013, following complaints from whistleblowers Dr Anand Rai and Ashish Chaturvedi. The police have arrested over 2,000 people in connection with the case, while more than 500 people are absconding. In all, 55 cases have been registered and chargesheets filed in 28 of these. The scam was a well-oiled system of state-bred corruption in which money was distributed among politicians, bureaucrats, technocrats, police, students and private medical college owners. Of the 2,530 accused, there are two ministers, three IAS officers and two IPS officers. Names of Union Minister Uma Bharti, former RSS chief K.S. Sudarshan and senior RSS leader Suresh Soni are said to figure in the chargesheets and statements of the accused. The High Court of Madhya Pradesh has designated 20 special courts in Bhopal, Gwalior, Indore, Rewa, Chhatarpur, Khandwa, Sagar, Damoh and Balaghat to hear the cases.

Established in 1982, Vyapam once had the reputation of being an honest organisation, which kept political interference at bay. Admissions to medical, engineering, agriculture and management courses and to prestigious government colleges were done by the agency. In 2008, its mandate was expanded to conduct recruitment exams for teachers, police constables, sub-inspectors, forest guards, jail guards, food inspectors and excise officers among others. The scam was exposed after Rai filed a complaint with the Indore police about corruption in the pre-medical test. After initial investigation, the case was quietly transferred to a special task force ahead of the assembly elections in November 2013. With the opposition putting pressure on the government, the investigation is now monitored by the High Court.

The police have found out that 701 pre-medical students benefited from the scam in 2012. The number went up to 876 in 2013. Police sources said Vyapam's controller of examinations Pankaj Trivedi and system analyst Nitin Mahendra worked as a team in the scam. Middlemen lured students and job seekers and took money and post-dated cheques. After the deal was struck, applicants were asked to leave their optical mark recognition (OMR) sheets blank. These were later filled with right answers at the Vyapam headquarters in Bhopal. Sometimes, the Right to Information act was used to take the OMR sheets out. These were then filled and put back.

In some cases, the roll number sequence was manipulated to seat the target student with the scorer, a brilliant former student who appeared at the examination just to help the target student. When the results were announced, the scorer, too, would pass. He would then take admission in a private medical college and later surrender his seat to someone who could pay Rs25-30 lakh, thereby making further profit for the kingpins of the scam. 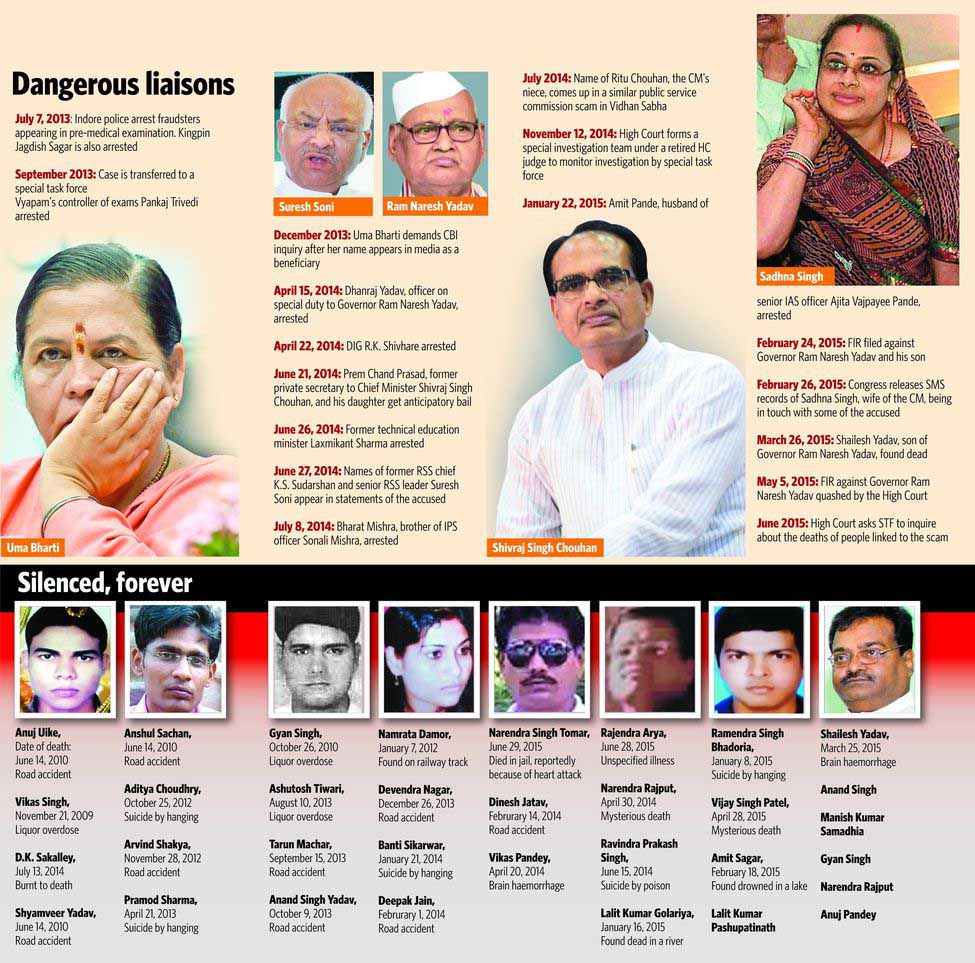 More than 40 people who were either witnesses or accused in the Vyapam scam have lost their lives in suspicious circumstances (see graphics). The last two deaths took place on June 28 and 29. Dr Rajendra Arya, 40, died at Birla Hospital in Gwalior on June 28, from an unspecified illness and a few hours later came reports that 29-year-old Narendra Tomar had died of heart attack in an Indore jail.

On March 25, Shailesh Yadav, son of Governor Ram Naresh Yadav, was found dead at his father's residence in Lucknow. Initially thought to be a case of suicide, the death was later attributed to brain haemorrhage. Namrata Damor, a 19-year-old student of Mahatma Gandhi Medical College, Indore, was killed in a train accident in Ujjain on January 7, 2012. Her father, Mehtab Singh Damor, said she was killed at the behest of Jagdish Sagar, said to be the kingpin of the Vyapam scam. Sagar had facilitated Namrata's admission to the medical college and later, there were disagreements about money.

Vijay Patel, an accused in the milk federation and food inspector recruitment exam scam, was found dead in a Bastar hotel on April 28, a day before meeting his lawyer. His father, Chottelal Patel, said Vijay died while he was out on bail in the Vyapam case and that the death was suspicious. “The police wanted more statements from him in other cases and there was a definite threat to his life,” he said.

The whistleblowers are worried, too. More than 23 security personnel refused to guard Chaturvedi, who moves around Gwalior on a bicycle. "I don’t have the resources to travel in a car or on a motorcycle,” he said.

The Vyapam scam has severely dented the credibility of the Madhya Pradesh government. Chief Minister Shivraj Singh Chouhan said it was he who had ordered investigation into the scam, but the opposition Congress alleged that his family members were involved. State Congress president Arun Yadav said it was impossible that such a mammoth scam flourished without the knowledge of the chief minister. The Congress has demanded a CBI inquiry, but the government has consistently opposed the demand. Alok Agarwal, state convener of the Aam Aadmi Party, said Chouhan was afraid of CBI inquiry. Uma Bharti was so furious when her name was mentioned in some media reports that she reached Bhopal in a huff and demanded a CBI inquiry. She said her name was dragged into the controversy to divert the issue. “The scam has its connection from top to bottom and the CBI is the right agency to find out the real culprits,” she said.