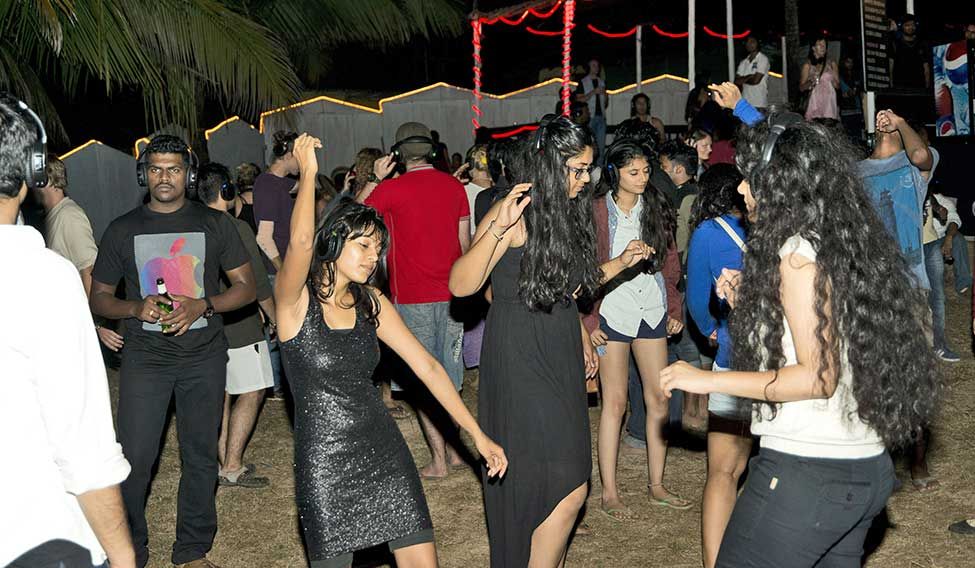 The scene at Goa’s Palolem beach is a bit confusing. The place is lit up with neon lights; DJs are on the console and people are dancing away. But one can neither see any loudspeakers nor hear any thumping beats or booming bass lines.

Welcome to the silent party. Here music is channelled through WiFi-enabled headphones that are handed out to revellers while entering the cove. So, a person can listen to music at a volume that he likes without causing any disturbance to others around him.

Goa-based international DJ Justin Mason’s Silent Noise Project has become one of the most sought-after entertainment events, globally. Mason organises headphone parties in Goa where three world-class DJs play simultaneously, competing with one another to get the crowd to tune into their music. Each headphone has three different channels, one dedicated to each DJ. People have the option of switching from one channel to the other to groove to the tunes of their choice.

“Enjoying music churned out by three different DJs in one soirée scales up your partying experience manifold,” says Zoe Jones, a British tourist, who recently attended a headphone party in Goa. “For any party goer, it is pure bliss.”

Not just party lovers, silent discos give almost everyone a reason to smile. At places where laws prohibit playing loud music after 10pm, it gives people an alternative to party the whole night without disturbing the surroundings or causing noise pollution. “It is a win-win situation for everyone,” says Ballikar.

The quest for exclusive entertainment avenues is becoming so intense that it is prodding event organisers to bring parties out of the confines of the club, thus, revolutionising the Indian partying scene, says Jaipur-based DJ Ravish. “That is why EDM [electronic dance music] concerts have become so popular of late. With thousands of people singing along and swaying to the tunes, the atmosphere at open-air events is intoxicating. You don’t get the same vibe in a restricted club environment.”

Finding recreational happiness means serious business for this generation. Aware, rich and tech-savvy, they are willing to invest time, money and effort to find an out-of-the-box experience. A hectic lifestyle, increasing stress levels and breakdown of joint family system have boosted the significance of recreational happiness like never before, says Delhi-based nightlife consultant Ashutosh Sharma.

“Earlier, people lived less complicated lives and simple leisure activities were enough to unwind,” he says. “But with our lifestyle becoming more and more demanding, stress levels have shot up enormously. And, unless an entertainment activity is exceptional, you don’t switch off completely.”

Looking for a unique experience, software engineer Sayan Dey joined the Delhi Drums Club instead of a high-profile club or gym. You don't have to know drumming to join the club. The idea is to meet periodically at a public place like a park and socialise, sing, dance and have fun to the rhythm of drums.

“Every time you attend a session the level and kind of entertainment are different,” says Dey. “You meet new people, discuss new things and come back with a new experience. That’s why I love it.”

Even going to the movies is no longer a casual affair. Multidimensional movies are the in-thing now. Complete with surround sound, individually controlled motion seats, live environment effects such as water sprinkle and heat sensation, you feel almost everything—poke, jolt, fire, rain or thunder—that is happening on the screen while watching a 5D or 7D film. It explains why high-end multiplex cinemas like PVR Gold and Director’s Cut are going great guns.

Similarly, unconventional theme parks are mushrooming across the country. For instance, if Gurgaon-based Kingdom of Dreams takes you on a fantasy ride with mega theatre musicals, Hyderabad-based Snow World allows you to experience the life of Eskimos at minus 10 degrees Celsius, and Mumbai-based KidZania is an infotainment park that offers experiential learning to children. At KidZania, which is a replica of a city, children can play the role of a pilot, surgeon, chef or firefighter. They can also earn (fake) money and spend it at the theme park.

“When you are engaged in an unusual entertainment activity, you bond with your partner or child and it gives you happiness,” says Viraj Jit Singh, chief marketing officer of KidZania India.

The Indian Association of Amusement Parks and Industries estimates that the sector, which is growing annually at 15 per cent, would touch Rs4,000 crore by 2020.