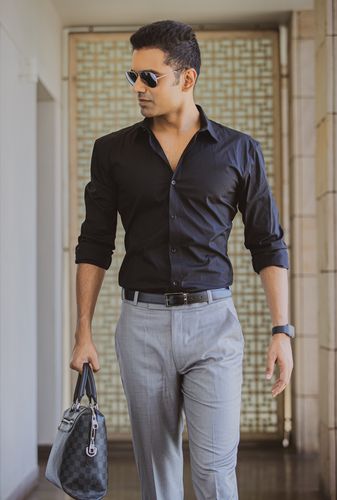 A man sitting hunched amidst a pile of files in a dusty office, 40 and flatulent, probably with heart issues. If this is your idea of an IAS officer, it is certainly not who Abhishek Singh is. If his Instagram page is any indication, the 2011-batch officer seems to be living a glossy life. In one photograph, he looks dapper in a grey suit at an iftar party hosted by former MLA Baba Siddiqui. In another, he pouts into the camera in a selfie with fashion designer Manish Malhotra, along with a posse of beautiful people who seem like they walked out of a bumper issue of Vogue. In a third, he is seated in a settee with actor Suniel Shetty, both smiling as though they had just won the lottery to health, wealth and happiness.

“Generally, people think that if you are doing serious work, you should look serious,” says the 31-year-old civil servant. “They think that is how one looks responsible. But the truth is, a person will look responsible by the work he is delivering. Not by the expression on his face.”

If that is the case, Singh, who is currently on a sabbatical from his posting as deputy commissioner of Delhi, must look very responsible indeed, because he has been doing some fine work. Aside from his duties as a bureaucrat, he is also a social entrepreneur and a motivational speaker at various IITs and IIMs. During the pandemic, he formed United by Blood, a relief initiative for citizens that helped provide oxygen and blood to those in need. He also founded a student-run think tank called SIGMA (Students for Involved Governance and Mutual Action) to work for the welfare of migrant labourers. He is currently writing a book on entrepreneurship.

But apart from social entrepreneurship and civil service, he has got his finger in another pie: Entertainment. It started with his role in the second season of Delhi Crime, the hit show based on the Nirbhaya gang rape which won the International Emmy for best drama series in 2020. The makers initially approached him to understand more about how the Indian bureaucracy functions, to help the actor playing an IAS officer in the show. Then, after their chat, they decided to offer him the role. Netflix is yet to announce the release date of the second season.

Singh says he was terribly nervous on the first day of the shoot. He felt like he was giving his UPSC interview all over again. It so happened that the shoot began with his scene. A pooja was done on the set. There were executives from Los Angeles and other parts of the world who had flown in. There was a massive crowd elbowing each other to catch a glimpse of the actors. Overwhelmed by all the attention, Singh called his friend for some encouragement. “You are an IAS officer so what is there to worry about?” said the friend. “Just play yourself. If you cannot even do this, it is better to commit suicide.” Singh groaned. “This is not helping at all,” he told the friend. When he gave his first shot, there was no reaction from the director, Rajesh Mapuskar. Singh was terrified that he had done it all wrong. Then Mapuskar said, “Shot ok. Next scene.” But Singh was not satisfied. He went up to him and asked whether he could reshoot the scene. “Listen, you were so good that we don’t want to break the momentum. We want you to do the second scene with the same momentum,” said Mapuskar.

Singh says that the best part of the experience was acting alongside veterans like Shefali Shah and Adil Hussain. He was impressed by the kind of homework they did. It included little things like if the scene was shot in an upstairs room, then Shah would do some jogging so that her dialogue would be delivered slightly out of breath, as though she had just climbed a flight of stairs. Or if the scene took place in the evening, she would crush her clothes, so they would not look too fresh.

After Delhi Crime 2, his friend Bhushan Kumar, who owns T-series, offered him a role in the music video of a song by B Praak—‘Dil Tod Ke’—which went viral and got 600 million views on YouTube. Since then, he has acted in music videos by Badshah and Jubin Nautiyal. He is now acting in a video by the Punjabi music label, Desi Melodies. He has also signed a film, the sequel of Shool (1999), which starred Manoj Bajpai and Raveena Tandon.

Although he had acted in school and college plays, Singh, who grew up in Uttar Pradesh, never thought he would become an actor. In fact, his earliest memory is of his father, a retired IPS officer, wanting to make him an IAS officer. “Because my dad was in the police, I, too, wanted to wear the uniform. But he told me that I would be able to contribute much more as an IAS officer. He was very strict. He used to say that I had to come first in every class. ‘If you are not coming first, then it doesn’t matter if you are coming second or third,’ he told me. I was a very good student, not because I loved studying, but because I was scared of my dad,” he says with a laugh.

To his two daughters, however, he is not a strict parent. He just tells them to enrich themselves with wisdom. To build a good personality and to make their own decisions which are unbiased by pre-conceived notions. His wife, Durga Shakti Nagpal, also an IAS officer, is perhaps even more famous than him. She came into the limelight when the UP government suspended her after her massive drive against illegal sand mining in 2013. Later, due to the public outcry on social media, her suspension was revoked.

So, does she mind him romancing other ladies onscreen? “Not as long as it stays onscreen,” he says with a laugh.