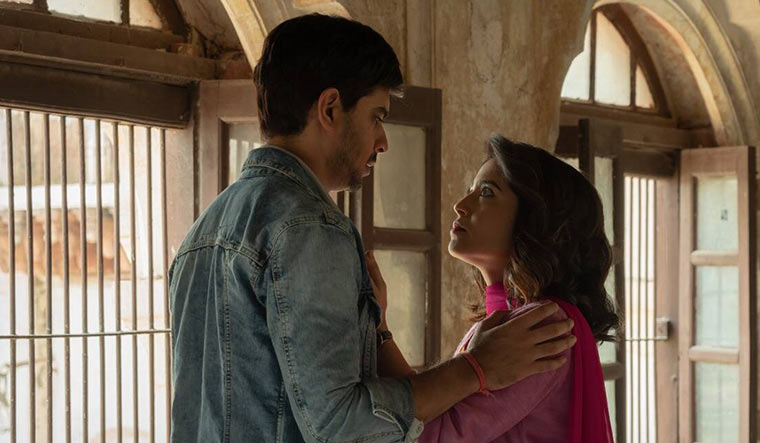 Yeh Kaali Kaali Ankhein depicts a love triangle that soon becomes a ‘wrecktangle’. Vikrant Singh Chauhan (Tahir Raj Bhasin), fondly called Vicky, is torn between two women—the one who loves him passionately and another who desires him deeply. The eight-episode series is a tale with many twists and turns. It opens with a quote from Othello: “For she had eyes and chose me.”

A bright engineering graduate, Vicky has humble dreams—a small house, a garden and a small car. His world revolves around Shikha (Shweta Tripathi), his girlfriend. He wants to take up a government job and settle down. However, he never knew what the future had in store for him. When he antagonises Purva (Anchal Singh), the daughter of an influential politician who is obsessed with him, he finds himself caught up in a whirlwind of romance and vengeance. His family’s water and electricity connections are cut and his father is accused of encroachment. The connections are restored as soon as he seems to have changed his mind.

Despite its sensational elements, Yeh Kaali Kaali Ankhein raises pertinent questions about relationships of convenience and the psychology behind synthetic love. However, the series lacks a likeable hero. The plan Vicky comes up with to free himself from Purva’s clutches is dubious. He circulates a video of him sleeping with another woman, who is actually his friend Golden’s girlfriend, and tries to spread rumours about him being gay.

After he is coerced into marrying Purva, he finds his life being blown to pieces. Purva is the one who takes the lead in their marriage, including in bed. Driven by desire, she asks Vicky to undress and enjoys watching him do so. The revengeful hero who keeps plotting to kill his wife is no better than Purva’s villainous father, Akheraj. At one point, Vicky says, “Compulsion and hate are not enough for you to kill someone. You need to be inhuman.” This is what he proves himself to be by attempting to have his wife murdered. His sister survives a bomb blast targeted at Purva. Vicky has many tragic character flaws that lead to his downfall.

Yeh Kaali Kaali Ankhein has an overdose of violence. However, shot at picturesque locations—in Ladakh, Madhya Pradesh, Pune and Patiala—amidst beautiful valleys and mountains, the series is a visual treat. The cast delivers impressive performances. Bhasin, last seen as Sunil Gavaskar in ’83 (2021), seems to be going places. Singh’s Purva is a layered and well-rounded character. Tripathi, best remembered for her roles in Masaan (2015) and Mirzapur (2018), makes Shikha memorable.