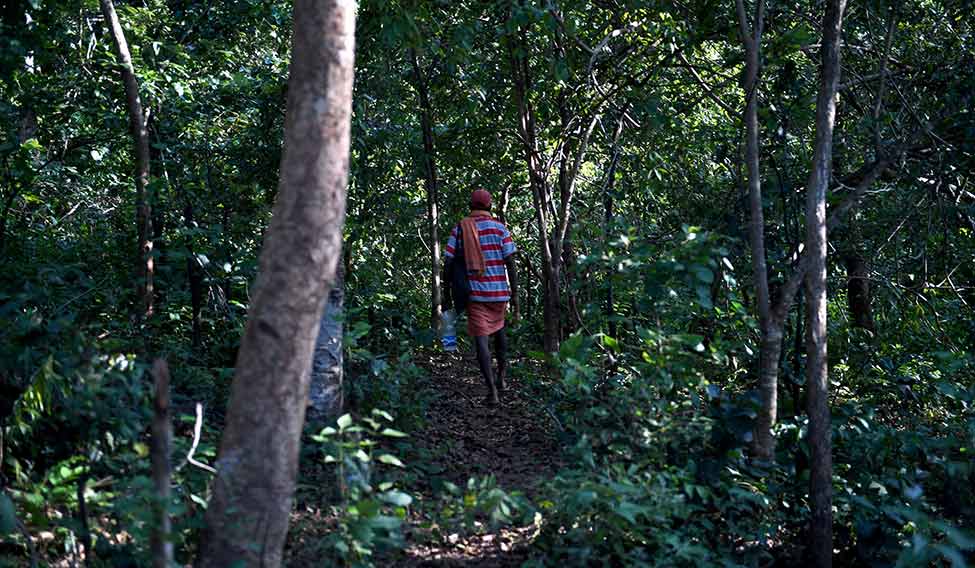 An area of darkness: A villager at the site in Ramguda where the encounter took place in October | Salil Bera

He was believed to be dead after the Malkangiri attack by GreyHounds in October, which killed 33 senior Maoists commanders and squad members. Many people even sent condolence messages to Gajarla Ravi alias Ganesh. But when THE WEEK visited the Dandakaranya free zone, we found Ganesh walking through the forest road to take stock of the deployment of forces in the wake of the attack. There was a security ring of around 50 Maoists with him, and he was carrying an AK-57, with ammunition hung around his waist and chest.

One of the finest military strategists for CPI (Maoist) and NIA's most-wanted men, Ganesh, who is in his early fifties, is also known to be an ideologue for the party. He was present during the attack in Malkangiri, along with politburo member Rama Krishnan. But, thanks to heavy security ring, Ganesh and RK managed to flee. Failing health forced RK to pass on the Dandakaranya 'baton' to Ganesh on the party’s insistence. The attack exposed the lapses on the part of Maoists, and now, Ganesh is rebuilding the Malkangiri area with fresh recruitment and security deployment. Known to be close to both, party chief Ganapathy and second-in-command Prashanta Bose (Kishan da), Ganesh is also in charge of the eastern region of the area. His three brothers, who are no longer alive, were also Maoists. An engineering student, Ganesh dropped out of college and joined the student wing of the People's War Group. He became close to Ganapathy, who took him along with him when he went underground and trained him as an ideologue of the party and a military expert as well.

Ganesh and RK came out of hiding in 2004 for talks with the Andhra Pradesh government led by the then chief minister Y.S. Rajasekhara Reddy. A year ago, Ganesh had planned to assassinate N. Chandrababu Naidu.

A diabetic, Ganesh always carries insulin. He recently recruited a large number of young boys and girls and deputed them in Malkangiri. Initially reluctant, he later agreed to talk to THE WEEK and asked us to come to a village (not to be disclosed), promising to reach within half an hour. He kept his word. Ganesh ordered that tea and dinner—rice and vegetable curry—be arranged. At night, a mat was rolled out on the mud floor of a hut, while his men created a four-tier security ring around the hut. Sipping milk, he spoke to THE WEEK in a freewheeling interview till dinner was arranged. He admitted the CPI (Maoist) is passing through difficult times as it has lost almost the entire party top rung. However, he feels that Maoists would make a comeback. Excerpts:

The government claims you have suffered one of the biggest setbacks, since inception, at the hands of security forces.

It is true to some extent. But, that is not in the free zone, where we run our own government. We will no longer be doing guerrilla warfare and would only retaliate when attacked. In 2007, in our last party Congress, we decided that People’s Liberation Guerrilla Army, our military wing, would be converted to People’s Liberation Army. We are also giving stress to expanding our party beyond our strongholds.

By abandoning guerrilla warfare, are you going to adopt the Chinese model of the People’s Liberation Army?

Yes. Like the Chinese PLA did, we will take action when needed. It would mostly be a people-centric mobile army.

You said your hold on the free zone was intact, but here, in Malkangiri, you faced one of the worst attacks in recent times.

You are sitting in Malkangiri. Do you find any police other than ours? Attacks happened because the government has adopted a ruthless path of crushing the rights of people living in jungles. We would never let that happen.

Your movement in Bengal has weakened and you are not doing well in Jharkhand either.

In Bengal, we suffered miserably because of our lack of policy framework. We were mistaken about [Chief Minister] Mamata Banerjee. However, like in Bengal, wherever we have had a slowdown, we have decided to rebuild our party.

Many Maoist leaders issued written statements that they would take revenge on Mamata Banerjee for Kishenji’s death.

Yes, revenge will be there. But, that will be by reviving another Lalgarh-like movement in West Bengal, which will uproot the Mamata Banerjee government. We are not going to physically eliminate her.

That would be a soft approach from a hardliner, which politicians across India are likely to appreciate.

Yes, we are changing our party. We are wooing educated people and giving them ideological and basic training on Maoism and communism as a whole. Many brilliant students have joined as student activists and are suddenly filling our second rung of leadership, which is ready to fill the vacuum at the top.

What about the top leadership?

Most of them have either been eliminated or been arrested. With the death of Kishenji, Azad, P.B. Rao, and the arrest of our propaganda bureau chief Kobad Gandhi and many others, there is a vacuum at the top. The present (NDA) government is more aggressive than the UPA. They are attacking us from air and unleashed ruthless armed groups like GreyHounds. But it cannot finish us as we have recruited many vibrant men and women who would take the top jobs.

By doing away with guerrilla warfare, are you going to end armed struggle?

No, never. Revolution will be our path and we intend to overthrow the existing fake democracy. But we need people with us, and intellectuals as well.

Why could you not hold your party conference in last one decade? And when will it be held?

It will happen (smiles). But we have other work to do now. Charu Majumdar conducted the first party Congress in 1969 and we did our seventh in 2007. We are presently busy with revamping our organisation in Jharkhand, West Bengal and other parts of the country, including Maharashtra and other northern states. So, it will take some time.

You seemed to be unaffected by the Malkangiri attack where you lost so many leaders.

Comrades die for a cause. We do not dwell on the past. We look at the future. Dandakaranya free zone is intact, and it will be so in the future.

Your form could not be submitted.
This browser settings will not support to add bookmarks programmatically. Please press Ctrl+D or change settings to bookmark this page.
Topics : #Endgame begins | #naxals