Colonel's killing shows insurgency in Manipur is far from over 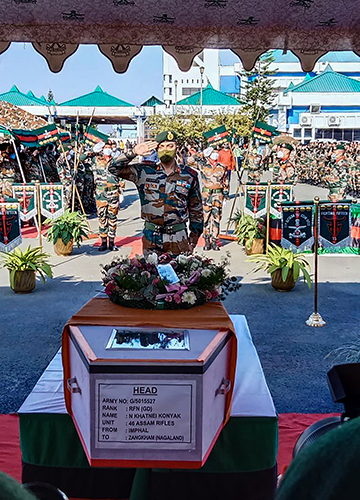 Final salute: An army officer pays homage to his colleagues who were killed in the ambush in Manipur | PTI

WHEN 18 JAWANS of the Army's 6 Dogra Regiment were killed in an ambush by Manipuri militants in June 2015, the Army responded with strikes on terrorist camps in Myanmar. A similar situation seems to be developing in Manipur after terrorists from the People's Liberation Army (PLA) gunned down Colonel Viplav Tripathi, commanding officer of 46 Assam Rifles, his wife, Anuja, and their six-year-old son, along with four soldiers on November 12.

After the attack, which took place in Churachandpur district near the Myanmar border, Manipur is teeming with security forces and capital Imphal is now a fortress. Choppers are airborne, performing aerial surveillance. "You cannot expect us to stay silent,” said an Army officer. “Our senior officer and jawans are gone. Even the child was not spared. We will pay back in the same coin." Sources said Army chief General M.M. Naravane had cleared the decks for action.

Chief Minister N. Biren Singh said those who were behind the attack wanted to destabilise Manipur. "I think some vested interests are behind the attack," said Singh. The people of Manipur expect a harsh response from the Army, especially because the family of a senior officer was targeted. "It goes against our ethics, as we never kill women and children,” said Nimbo Mar, a surrendered militant.

The point man of the attack is allegedly Sanatomba Singh, a PLA commander who had surrendered last year. He returned to the jungles after a few months. The PLA is the armed wing of the Revolutionary People's Front (RPF), a Maoist-backed organisation formed in early 1980s. Most PLA cadre are Meiteis and the group has a broad spectrum of activists ranging from liberals to extreme radicals. The PLA also has Manipuri Nagas (mainly Tangkhul Nagas), but most of them feel alienated within the organisation. The PLA leadership has now launched a Naga insurgent group called the Manipur Naga People's Front (MNPF) to assuage their feelings. The November 12 attack is said to have been organised by the MNPF to remind the Union government about its demand for a sovereign Naga state. The talks between the Union government and the Naga rebels, meanwhile, are on the verge of collapse.

Major insurgent groups in Manipur—like the PLA, the People's Revolutionary Party of Kangleipak (PREPAK) and the Kanglei Yawol Kanna Lup (KYKL)— have a common platform called Cor-Com (Coordination Committee). Earlier attacks by these groups were claimed by Cor-Com. But this time, the PLA has claimed responsibility. There are observers who wonder whether the PLA is getting out of Cor-Com and joining the United National Liberation Front of Western South East Asia (UNLFWSEA), a joint front of armed groups headed by Paresh Baruah of the United Liberation Front of Asom-Independent (ULFA-I).

The manner in which the Churachandpur ambush was carried out resembles the brutality of the insurgency days of the 1980s. The militants first triggered IED blasts, then came out of the woods and shot the victims dead. The Assam Rifles, meanwhile, has issued a stern warning to the perpetrators. "Some people have claimed responsibility. But we do not believe their words. We will get to the bottom of it and bring the perpetrators to justice," the Assam Rifles told THE WEEK. Questions, however, remain about the sudden spurt of violence in Manipur as the state prepares for assembly polls. Singh, who knew the rebels well during his days as a journalist, had managed to calm things down as chief minister. He streamlined the surrender of many insurgents, including members of the PLA and the top brass of the RPF. The latest attack is perhaps a message from the militants that they are still capable of mounting an offensive.

Senior officers of the Assam Rifles said its soldiers were involved in fencing the border with Myanmar. The attack has shown that the militants are prepared to escalate the situation to stop the fencing project. "Of the 90km border, only 40km could be fenced so far,” said Singh. “We need to finish the rest as early as possible."

The Army must be wary of the fact that the PLA managed to launch such an audacious attack despite its earlier success in dismantling terrorist camps through cross-border strikes in 2015 and Operation Sunrise conducted on the Myanmar border (along with the Myanmar army) in 2019. But the insurgents seem to have escaped to Myanmar and managed to regroup. And with Myanmar now under military rule, the Union government has its task cut out.

"Delhi needs to engage with the military rulers in Myanmar to finish the insurgents once and for all,” said a senior Congress leader from Manipur. “That would perhaps bring permanent peace to Manipur."