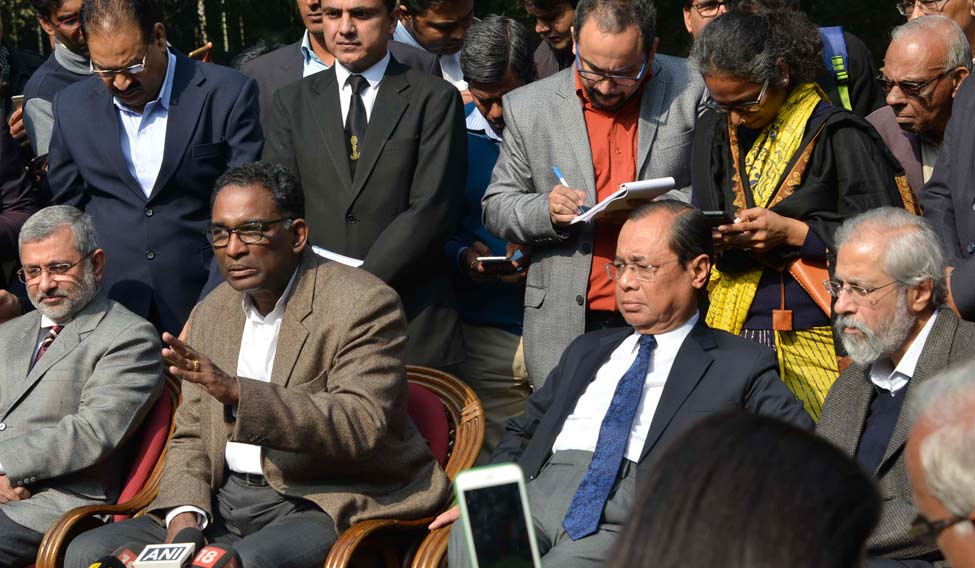 In an unprecedented move, four sitting judges of the Supreme Court, who are members of the collegium, on Friday came on camera to raise questions about the administration of the apex court by Chief Justice of India Justice Dipak Misra.

The four judges—the second seniormost judge Justice J. Chelameswar, the next in line to become Chief Justice of India Justice Ranjan Gogoi, Justice Madan B Lokur and Justice Kurian Joseph—spoke to the media at the residence of Chelameswar, raising issues with regard to the functioning of the office of the chief justice amongst others, the development amounting to an open protest against Misra.

Chelameswar, who largely addressed the press conference on behalf of the four judges, described it as an extraordinary event in the history of the institution of judiciary. “The administration of the Supreme Court is not in order. And many things that are less than desirable have happened in the last few months,” he said.

He said that the efforts of the seniormost members of the court to get an adequate response out of the CJI to these issues have failed. The four judges had a couple of months ago written a letter to Misra detailing the issues. The four judges had met the CJI this morning as well to discuss the issues, the immediate provocation learnt to be the manner in which the case pertaining to Justice Loya's death was allocated.

“Unfortunately, we could not convince him. Therefore, we are left with no choice but to communicate to the nation,” Chelameswar said.

“I don't want some wise men to tell us later after 20 years that we four judges sold our souls instead of taking care of the institution and the nation. We have placed this in front of the people,” he said.

Gogoi said that they had by coming out in the open about the issues discharged their debt to the nation.

Asked if the press conference amounted to the four judges breaking ranks in the Supreme Court, Gogoi said, “It is a sign of responsibility to the nation. Nothing more.”

Your form could not be submitted.
This browser settings will not support to add bookmarks programmatically. Please press Ctrl+D or change settings to bookmark this page.
Topics : #Supreme Court