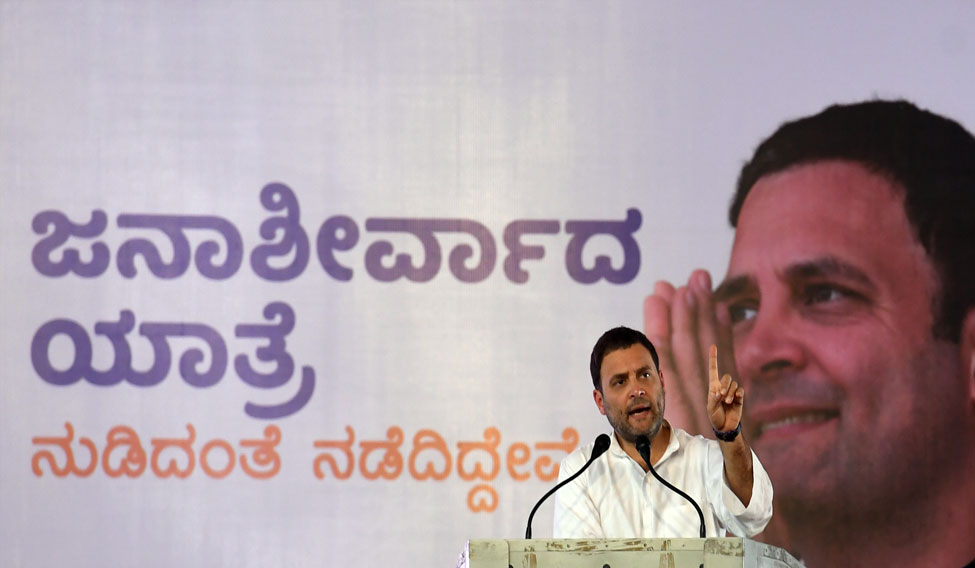 “Prime Minister Narendra Modi is driving this country with his eyes on the rear mirror. Obviously, accidents like demonetisation and Gabbar Singh Tax are bound to happen. But our Chief Minister Siddaramaiah always looks ahead and drives the state forward,” said AICC president Rahul Gandhi hitting back at Modi for his recent criticism of the UPA in Parliament.

Gandhi kickstarted the first leg of the 'Janaashirwada Yatra' (bus tour) from Hospete in Bellary on Saturday, which also marks the beginning of the temple-run. The event saw the Congress leaders in full attendance, sending out a strong message of unity.

The choice of Bellary to flag off the 2018 election campaign is an effort to rekindle the 2013 mood,  when the Siddaramaiah-led Padayatra from Bengaluru to Bellary catapulted the party to power, while crushing the ruling BJP mired in illegal mining scam.

Earlier, Siddaramaiah reminded the people that it was the Congress which took on the corrupt BJP, dared the Reddy brothers and took out a padayatra, which led to the downfall of the "Republic of Bellary".

Siddaramaiah also launched a tirade against Modi for dubbing the Karnataka government as "10% commission sarkar" saying, "Modi should be ashamed to make such allegations, especially when he is sharing the dais with Yeddyurappa, Katta Subrahmanya Naidu and Krishnaiah Setty, who were jailed in corruption cases. We are confident our party will win all nine seats in Bellary."

Exhorting the crowds to vote for the Congress, Gandhi asked a cheering crowd, "Who would you trust? The people who makes false promises or the one who fulfils all the promises? "

"UPA and Sonia Gandhi promised to grant Special Status to Hyderabad-Karnataka region by making an amendment (to Article 371J), even though the BJP and L.K. Advani had opposed it. The amendment ensured the region's development fund increases from Rs 450 crore to Rs 4,000 crore, created 20,000 jobs and reserved 5,000 medical and engineering seats for students from this region.  But did Modi create two crore jobs or deposit Rs 15 lakh in your bank account?," asked Gandhi.

Calling Modi's Gujarat model of development a sham, Gandhi said the hardworking people and small businessmen had developed Gujarat. "Modi only sold the state to a handful of industrialists.  He leased out 40,000 hectares of land at Re one per acre, which was sold for Rs 30,000 per acre within three months.  Modi gave land,  free electricity and water worth Rs 33,000 crore to Tata Nano plant, which has not manufactured a single Nano car till date.  Modi set aside Rs 55,000 crore for SC/ST development for all of India and Siddaramaiah has allocated Rs 27,000 crore in Karnataka alone. Who is pro-poor now, " asked Gandhi.

He urged Modi to learn from Siddaramaiah, who responded to farm crisis by waiving their loans and delivering on his promises.

"The nation does not want to hear about the past or excuses from Modi, but is concerned about the future," mocked Gandhi.

Your form could not be submitted.
This browser settings will not support to add bookmarks programmatically. Please press Ctrl+D or change settings to bookmark this page.
Topics : #Rahul Gandhi | #Karnataka election 2018