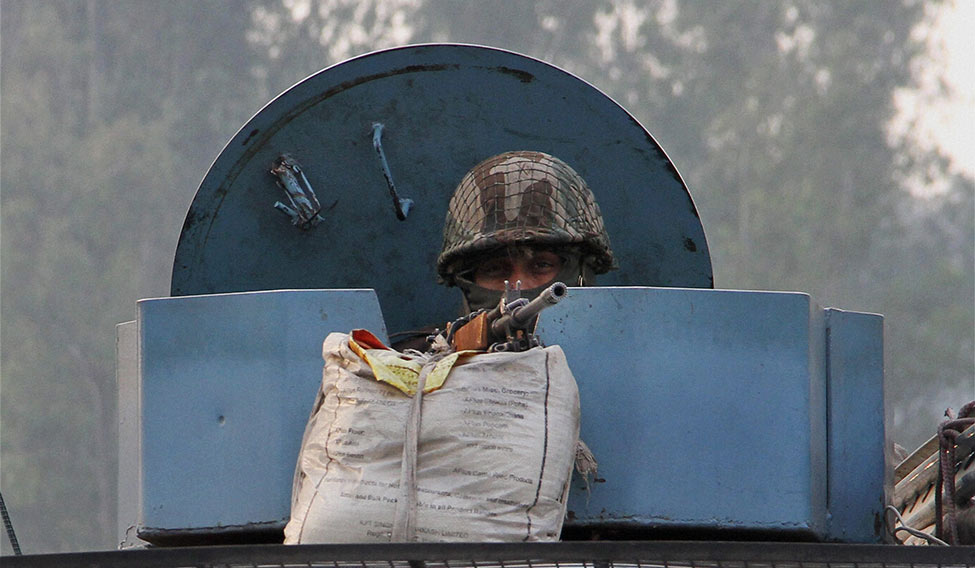 On the hunt: A soldier participating in a search operation following the Nagrota attack in Jammu | PTI

November 29 was the last day in office for General Raheel Sharif, Pakistan’s army chief. It was also the last day in uniform for Lt Gen D.S. Hooda, commander in chief of the Udhampur-based Northern Command, under whose watch the Indian Army carried out surgical strikes across the Line of Control on September 29.

Hooda was retiring on a high, but Sharif was not. His otherwise impressive tenure was sullied by the Indian Army’s surgical strike and the heavy cross-border shelling it launched after the November 22 attack in Machil, in which three jawans were killed and one of the bodies was mutilated. The shelling destroyed several Pakistani posts across the LoC. Three Pakistani soldiers, including a captain, were killed, while another captain was wounded in the head.

Pakistan’s director general of military operations later called his Indian counterpart and claimed that the shelling had killed 11 people, eight of them civilians aboard a bus in Neelam. According to the Pakistani media, India was warned that Pakistan “reserves the right to avenge the killings at a time and place of its choosing”. The Pakistani parliament, however, ruled out a “tit for tat” attack. In fact, cross-border shelling stopped soon after the Pakistani DGMO’s call.

Just when things seemed to have calmed down, militants struck at two places in Jammu: at Chamliyal in Samba and an army unit at Nagrota. The twin attacks happened on the day Sharif and Hooda retired.

In the first attack, the Border Security Force intercepted three heavily armed infiltrators. In the ensuing gunfight that lasted several hours, all three were killed, and four BSF troopers and a deputy inspector-general were injured. Three other militants, all dressed in police uniform, attacked an artillery unit of the Army’s 166 field regiment, located 3km from the corps headquarters at Nagrota. The three attackers, sources said, reached the spot in a car at 5am, and lobbed grenades at the sentry post. They managed to enter the officers’ mess complex in the camp and opened fire. In the initial counteraction, one officer and three soldiers were killed.

“The terrorist entered two buildings which were occupied by officers, families and men. This led to a hostage-like situation,” said a spokesman for Northern Command. “The situation was quickly contained and thereafter, in a deliberate operation, all were successfully rescued, which included 12 soldiers, two ladies, and two children.”

One officer and two jawans died in the rescue operation. All three militants were killed and their bodies were recovered. The attack, which came nearly two months after a similar breach at the brigade headquarters in Uri, has put focus on the vulnerability of the security infrastructure around military bases. Had India learned its lesson from the Uri attack, say experts, Nagrota would not have happened.

Interestingly, the attack came at a time when Pakistan had signalled that it wanted to hold talks with India. Ever since India’s surgical strike, the clashes on the International Border and the LoC have increased manifold, with Pakistan losing 27 soldiers. India has lost more than 17 soldiers to sniper attacks and ambushes by Pakistani army’s border action teams. While Sharif may have salvaged some pride by ordering the Nagrota attack, it is unlikely to ease matters for his successor, Gen Qamar Javed Bajwa.