Dawn of the daughter 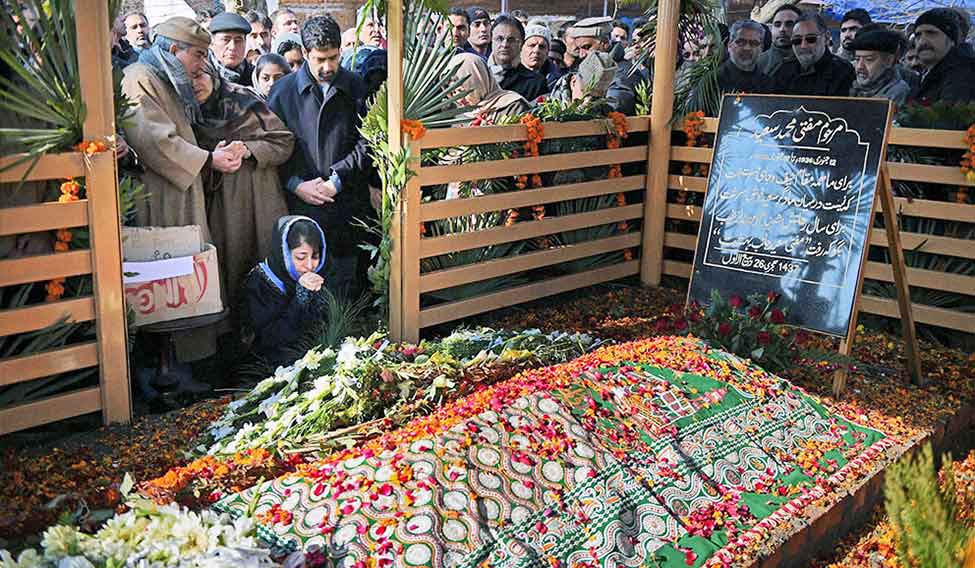 With her father gone, Mehbooba Mufti has the tough task of running both the government and her party

In 1989, when militancy came knocking on Kashmir's door, democracy became a collateral damage. After seven years of governor's rule, when the Union government decided to bring back democracy in Kashmir in 1996, the Congress found no takers. Mufti Mohammad Sayeed, then with the grand old party, was forced to field his wife, Gulshan, from Pahalgam, and eldest daughter, Mehbooba Mufti, from Bijbehara in Anantnag. His first choice, though, was his son, Tassaduq Hussain; but he was underaged then. The National Conference won with two-thirds majority. Gulshan lost, but Mehbooba won. Though her entry into politics was reluctant, Mehbooba took on the role of leader of the opposition then. And life, as she knew it, changed.

Three years on, the Muftis left the Congress to float their own party—the Peoples Democratic Party. While the Mufti was busy with party work, Mehbooba focused on building a connect with the people of the state. She visited victims of the state's highhandedness and even families of killed militants. And, her concern and condolences worked for the party, especially in south Kashmir. Amid all this, the single mother could hardly spend enough time with her two daughters. “I don't consider myself a good mother,” she told THE WEEK in an earlier interview. “In the beginning, I took great care of Irtiqa and Iltija. But I was not around during their growing up years in Delhi.” Iltija now works with the Indian High Commission in London, and Irtiqa, influenced by her uncle Tassaduq—an accomplished cinematographer and screenwriter who has worked with Vishal Bhardwaj on Kaminey and Omkara—is studying screenwriting in New York.

But Mehbooba's biggest regret could be the poor response the Mufti's death evoked in Kashmir. An ailing Mufti died on January 7 at the All India Institute of Medical Sciences in Delhi. Only a few thousand people attended his janaza (funeral prayers) at Dara Shikov in his hometown, Bijbehara. It was a clear message to the PDP leadership: people were angry over its alliance with the RSS-backed BJP. Its supporters have accused the Muftis of trading their trust for power. This is why, perhaps, Mehbooba has delayed taking oath as the state's first woman chief minister, pushing the state into governor's rule for the seventh time. “Mehbooba's prime concern is the legacy of her father,” said a senior PDP leader. “He dedicated the last three decades of his life for the betterment of his people, and right now most of them are angry with us.”

The Mufti and Sheikh Abdullah have been the two tallest political leaders of Jammu and Kashmir. The funeral procession of Sheikh Abdullah saw one million people thronging the streets of Srinagar. Prime minister Indira Gandhi flew to Srinagar to pay her last respects, as did many other national leaders. But Prime Minister Narendra Modi did not attend the Mufti's funeral. The BJP was represented by its general secretary Ram Madhav, Union minister Nitin Gadkari and leaders like Nirmal Singh, who was the deputy chief minister in the Mufti's cabinet.

On January 10, the fourth day of mourning—Chaharum—Mehbooba sat by the grave of her father, weeping inconsolably. Less than 5,000 people had showed up—another grim reminder of the people's anger. This, despite the fact that 90 per cent of legislators in south Kashmir's three districts are from the PDP. A sombre-looking Mehbooba and her family members—Gulshan, Tassaduq, sisters Mehmooda and Rubaiya—huddled together. Tears trickled down Mehbooba's face as she raised her hands skywards in prayer. As the crowd raised pro-Mufti slogans, she went down on her knees and continued to sob—a sight captured by many mourners on their cellphones. She waved to the people, and left without a word.

Not that Mehbooba has never cried. She has shed many tears while consoling the mothers of young boys killed by security forces, many of them militants. This earned her the moniker rudali (mourner) from her opponents. But the way she broke down at her father's grave melted many hearts. She may not consider herself a good mother, but she definitely has been a good daughter.

ANALYSTS IN KASHMIR are unanimous in their opinion that without Mehbooba there would have been no PDP. It was because of her relentless mobilisation, especially during the three years preceding the 2002 elections that the PDP became a force to reckon with. She is the woman behind her father's success. “No, I am not,” she had told THE WEEK. “My father is a far bigger figure than one can assume.” But there is no denying that Mehbooba single-handedly turned around the political fortunes of her father in Kashmir, who was otherwise seen as New Delhi's man with an aspiration to dethrone the Abdullahs. And he did that in 1983 by supporting G.M. Shah, estranged brother-in-law of Farooq Abdullah.

Four days after the Mufti's death, Mehbooba stayed confined to a room on the upper floor of the Mufti's residence, Fairview. Apart from the aforesaid BJP leaders, she only met Congress president Sonia Gandhi along with Ambika Soni, Ghulam Nabi Azad and Saifuddin Soz. The visit by senior Congress leaders led to speculation of a possible PDP-Congress alliance. In her condolence letter to Mehbooba, Sonia Gandhi wrote: “Mufti sahib left us too suddenly, but he will live in our individual and collective memories. He will live as an example of the finest composite traditions of J&K and the country.” Though Azad denied the Congress had offered support to the PDP, state Congress leaders said the chances of an alliance had increased. State Congress chief G.M. Mir told reporters, “If the situation demands and the PDP approaches us, we will respond positively.”

Though PDP spokesperson Mehboob Baig reportedly said the party would form a government with the BJP, headed by Mehbooba, after the end of the seven-day mourning period, the outpouring of sympathy by the Congress leadership did rattle the saffron party. BJP leader Nirmal Singh said the party would take a call on government formation “once we receive a formal communication from the PDP”. The BJP seems to have accepted Mehbooba heading the coalition. “We will try to work towards realising all the dreams of Mufti sahib,” said Gadkari. The BJP, sources said, is hoping Mehbooba will stay the course, despite murmurs within the PDP to break off the alliance to win back public support.

Though many in the PDP want Mehbooba to align with the Congress, it is easier said than done. Mehbooba and her close aides like Naeem Akhter are well aware that while it is easy to join forces with the Congress, they will still have to deal with the BJP at the Centre. The PDP fears the BJP will make its task of governing the state difficult if ties are broken. The Centre could choke financial assistance, which would further hamper flood relief. The Centre also has control over the security forces, including the police.

ALSO, CHANGING COURSE midway will affect Mehbooba's credibility; she would be deemed 'unreliable'. She also runs the risk of proving her father wrong, which would permanently belittle the Mufti in the eyes of Kashmiris. It could also encourage dissent within the PDP. Though Mehbooba has the support of most of the PDP legislators, a few seniors, who felt left out after the PDP formed the government with the BJP, can be manipulated to weaken the party. Also, some newcomers in the PDP, who have bagged cabinet berths, would not like to disturb the equation with the BJP. One of them, sources said, was accommodated in the cabinet by the Mufti to lure him away from the disgruntled lot in the party.

The overtures from the Congress, however, could work to Mehbooba's advantage—she could leverage the Congress's readiness to align with her party to strengthen her bargaining power against the BJP. “The BJP might have thought they could manipulate her,” said a senior journalist in Srinagar. “But with the Congress waiting in the wings, they will have to be cautious.”

Late evening on January 10, Mehbooba summoned all her legislators and thanked them for their support. For the first time, Tassaduq also attended the meeting. A role for Tassaduq is not being ruled out to strengthen the grip of the family on the party. A newspaper report, quoting sources, said the legislators unanimously supported Mehbooba's leadership. “Whether you go for an alliance with the BJP or the Congress, we stand behind you,” the legislators reportedly said.

In her interview with THE WEEK, Mehbooba had said that she did not boss her daughters around. “You can’t,” she said. “Children today need space.” She could very well use that to navigate the difficult political climate her party is faced with.