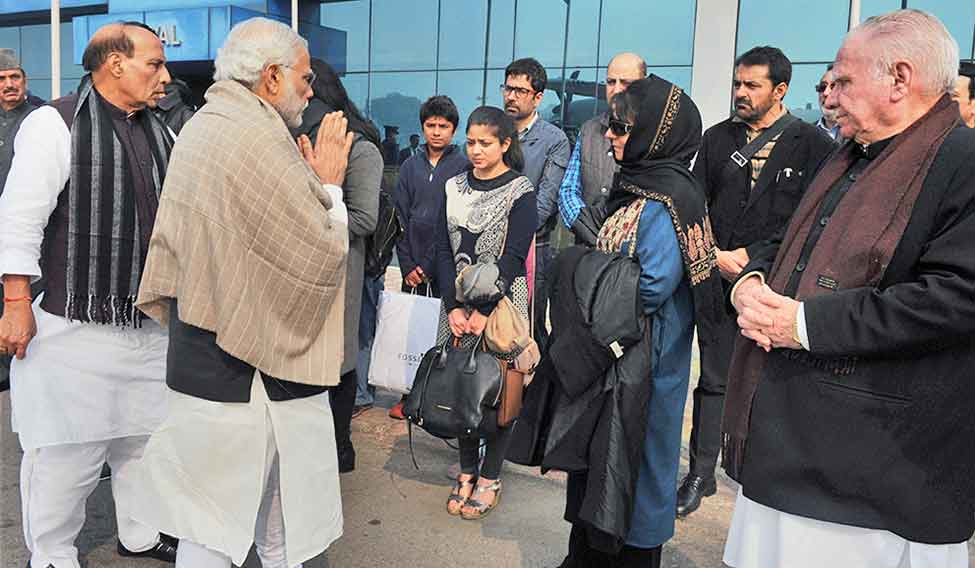 A village girl at heart, Mehbooba Mufti's people connect is her strength

Mehbooba Mufti is not an early riser. But that is likely to change, now that she is all set to become the first female chief minister of Jammu and Kashmir. But before politics, Mehbooba's life revolved around her two daughters—Irtiqa and Iltija. She split from her husband, Javid Iqbal, also her maternal cousin, in 1987 and moved to Delhi to deal with the trauma of a broken marriage, and more so to give her daughters a better life. The outbreak of militancy in 1989, and the kidnapping of her sister Rubaiya, a medical student then, by militants only reinforced her decision to stay away from Kashmir.

Mehbooba took a job in an airlines as an executive. She ensured her daughters got a good education and a balanced worldview. Outings were part of their routine, a concept alien to a generation of Kashmiris. That is how Jade, a Chinese restaurant in Delhi, became her favourite eating joint. She would visit the place occasionally for its crispy spinach dish.

Though Mehbooba had struck the right balance, her father, Mufti Mohammad Sayeed, could not see her struggle in the capital city with her little daughters. When the 1996 elections were announced, he fielded her from his hometown, Bijbehara. She won, and thus began her political journey.

By the time the Mufti launched the PDP in 1999, Mehbooba had well acquainted herself with the politics of the state, Kashmir in particular. Kashmiris, then, were angry at the ruling National Conference, accusing it of suppressing genuine dissent. Mehbooba used the anti-Abdullahs sentiment to build a connect with the people. She would visit families of militants killed in encounters and sometimes help them with money. She visited the house of then Hizbul Mujahideen operational chief Aamir Khan, whose teenaged son, Abdul Hameed, had allegedly been killed by the security forces in custody.

Interacting with the local people came naturally to her as Mehbooba is a village girl at heart; her childhood was mostly spent at her maternal grandparents' home in Anantnag. Her day begins with a cup of tea; no preferences; nun chai (salt tea), too, is fine. Former police officer Abdul Hamid, Mehbooba's senior at Kashmir University where she studied law, said: “She behaved very normally and would ride the local bus to the university and back. She maintained a low profile and had a few friends including a girl from Jammu.”

Today, there is no match for Mehbooba's grassroots mobilisation and powerful public rallies in Kashmir. The National Conference was so rattled by her campaigns in the 2008 elections that it got her former husband, Iqbal, to campaign against her, but in vain.

Mehbooba, 56, has successfully marketed herself as a woman of Kashmir. Her dress—colourful abayas and headscarves—and demeanour only accentuate that. Green seems to be one of her preferred colours.

Mehbooba is very conscious of her public image. When her photo without the abaya and headscarf—clicked at the wedding of BJP president Amit Shah's daughter—surfaced on the net, the PDP top brass was quick to dismiss the photo as 'morphed'. She, however, has no qualms in admitting that despite being raised in a religious family, she has not memorised many Quranic verses and prayers.

But Mehbooba has her detractors, too. Hurriyat spokesman Ayaz Akbar has in the past accused her of manipulating the families of 'martyrs' for votes by expressing sympathy. She has also been accused in New Delhi for overplaying the soft separatist card at the expense of national interest. In his book Kashmir: The Vajpayee Years, former Research and Analysis Wing chief A.S. Dulat wrote that prime minister Atal Bihari Vajpayee had “grave doubts” about Mehbooba and refused to share the dais with her when he visited Kashmir in 2003.