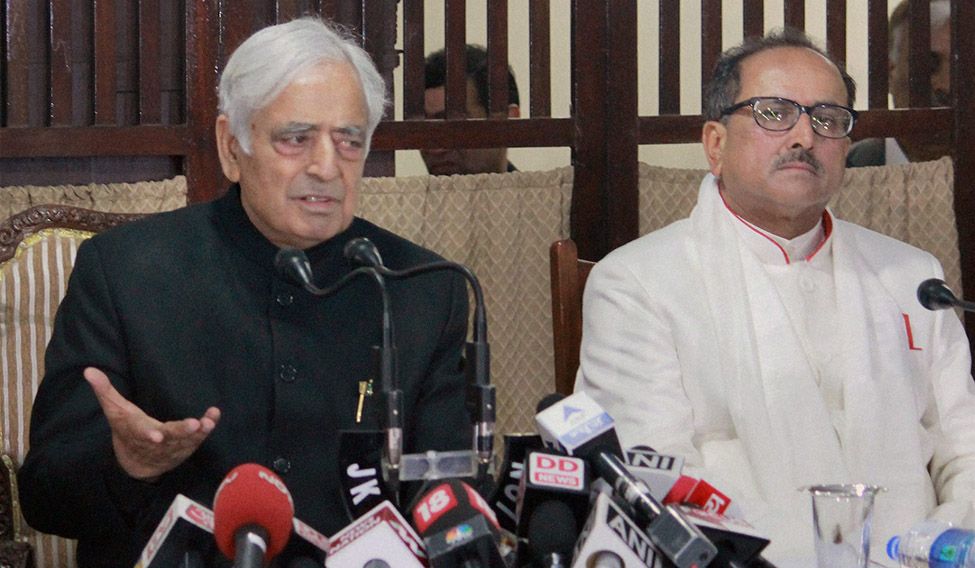 The PDP-BJP alliance in Jammu and Kashmir is tense. And, vote banks are incensed

After being sworn in as chief minister of Jammu and Kashmir on March 1, Peoples’ Democratic Party patron Mufti Mohammad Sayeed said that the PDP-BJP alliance in the state was based on conviction. He said the PDP could not ignore the BJP, which had won a big mandate in Jammu.

The coming together of the two parties seemed like the best solution for a stable government, political pundits agreed. At the heart of the alliance was a document—the Agenda for Alliance. The core of the document was a comprehensive plan for rehabilitation of the victims of last year’s floods. A plan that would cost Rs44,000 crore.

The PDP hoped the generous relief package would assuage the anger among Kashmiri voters over the alliance. But, three months down, the Union government has released only around Rs3,000 crore—less than 10 per cent. Further assistance seems unlikely, at least for now. The BJP has also started tightening screws on administrative and political matters, leaving little or no space for the PDP to manoeuvre. As a consequence, the anger against the PDP in Kashmir has mounted.

Noor Ahmed Baba, head of the department of political science, Central University of Kashmir, said the functioning of the government was disappointing. “I do not think their performance has anything striking so far,” he said. “Both of them are losing out in their respective constituencies.” Baba said that in the absence of Central funding the state could not confidently start rehabilitation of flood victims.

“The Government of India must fully fund the rehabilitation and reconstruction plan,” the Agenda for Alliance says. Of the Rs3,000 crore, less than 25 per cent will go towards rehabilitation, sources said. A large chunk of that is marked for the Jammu region, while maximum damage happened in Kashmir. For example, a large chunk will go towards rebuilding ‘kaccha’ houses, which are mostly in Jammu.

Other developmental work, too, is lagging for want of funds. On June 24, at a meeting of the district development boards of Rajouri and Poonch, Sayeed blamed the previous government for the slow pace of development. He said his government had inherited a liability of Rs9,000 crore from the National Conference-Congress government. Projects worth Rs3,000 crore had been executed without inviting tenders, Sayeed said.

‘’Mufti sahab came here [to Lal Chowk] and promised money, but nothing has materialised to date,” said Hial Ahmed, a shopkeeper, who lost most of his goods to the floods. “There is general disappointment among the business community.” Hundreds of daily wagers from government departments have gone on protest repeatedly during the last three months.

The PDP has also failed to achieve any breakthrough on the withdrawal of the Armed Forces Special Powers Act (AFSPA). The party was expected to persuade the BJP to at least soften its stand on the AFSPA. But, the state BJP has been firmly resisting any move to withdraw the AFSPA. To make matters worse, the BJP has repeatedly reiterated its commitment to repealing Article 370.

The PDP played to the gallery by issuing a few orders like for the release of Masarat Alam, the face of the 2010 azadi agitation. A second order urged ministers and government officers to display the state flag on government vehicles and at offices. Thanks to the BJP’s arm-twisting, Alam was arrested just 40 days after being released on March 6. The order about the state flag was rescinded within 24 hours.

The National Conference was quick to exploit the PDP’s weak spot. NC president Omar Abdullah described the first 100 days of PDP-BJP rule as a series of U-turns. “The U-turn over arrests, particularly the release of what they call political prisoners, and the U-turn on flood relief,” Omar said. “If anything, salt is being rubbed into the wounds of people when they are being handed relief cheques of Rs37.”

Omar said the PDP is trying to push an employment policy that is designed for backdoor appointments. He said the party would move court if the government went ahead with the proposal to appoint people in districts on contract basis for seven years at Rs7,000 a month. The appointments would be done by the district administration. He said the PDP hadspurned offers of support from the NC and the Congress saying development in the state would receive a boost with the free flow of money and resources from Delhi.

“Today, people are crying for money,” Omar said. “My understanding is that bills for more than Rs900 crore are pending in the treasury and there is no money to be seen. Development has come to an absolute standstill.”

Finance minister Haseeb Drabu had opened the presentation of his maiden budget saying he would not go to Delhi with a begging bowl. “I used to beg Delhi for money when I was chief minister,” Omar said. “Leave aside your ego and let us go to Delhi and beg. I will accompany you, if you need me.”

Though Sayeed called the decision to ally with the BJP one of conviction, it is increasingly proving to be one of compulsion for both parties. The BJP is playing hardball to create an impression in Jammu that it is uncompromising. Many BJP supporters in Jammu are disgruntled with the party for having conceded the chief minister’s post and nine cabinet berths to the PDP, against four for the BJP.

Much of the BJP vote in Jammu came from the Modi wave, as assembly elections were held three months after the Lok Sabha polls. Observers say that unless the BJP leaves an impact on the ground, the party will suffer in the next assembly polls.

Many Jammu residents credit the Congress for development of Jammu. After the Centre sanctioned an All India Institute of Medical Science for Kashmir, the state BJP has now promised to get one for Jammu. It has also cut a deal with the PDP for giving West Pakistan refugees land for houses and money for business ventures. The PDP had opposed state subject rights to West Pakistan refugees of 1947. The BJP thinks the deal is good enough to win favour with Jammu voters. The PDP believes it has got the better of the BJP on the issues of West Pakistan refugees and resettlement of Kashmiri Pandits.

“There is consensus on settlement of migrant Kashmiri Pandits,” said Education Minister Naeem Akhter. “Our partner agreed that there would be no separate colony for Kashmiri Pandits and they would return to multi-religious Kashmir.”

Nirmal Singh, senior BJP leader and deputy chief minister, aptly explained the BJP-PDP alliance: “The BJP and the PDP are like North and South Poles. We struggled for two months, before agreeing to ally. Our alliance is not an ideological or a political one. This is an alliance forged to give the people of J&K a stable and corruption-free government.”

The uneasy PDP-BJP alliance under Prime Minister Narendra Modi’s watch is in sharp contrast with prime minister A.B. Vajpayee’s strategy. Vajpayee helped the PDP-Congress government stabilise the state after two decades of militancy. But, with BJP having numbers and Modi being no Vajpayee, Sayeed has very little breathing space for goodwill gestures to separatists or to deal with human rights abuses by security forces.

Already, Sayeed is facing a lot of heat over the killings of six former militants and pro-separatists in Sopore. The police believe that a breakaway group of the Hizb-ul-Mujahideen is behind the killings. The group that identifies itself as Lashkar-e-Islami started targeting people soon after Defence Minister Manohar Parrikar said that India would use a terrorist to neutralise a terrorist.