Amid spate of resignations, J&K govt to hike pay for special cops 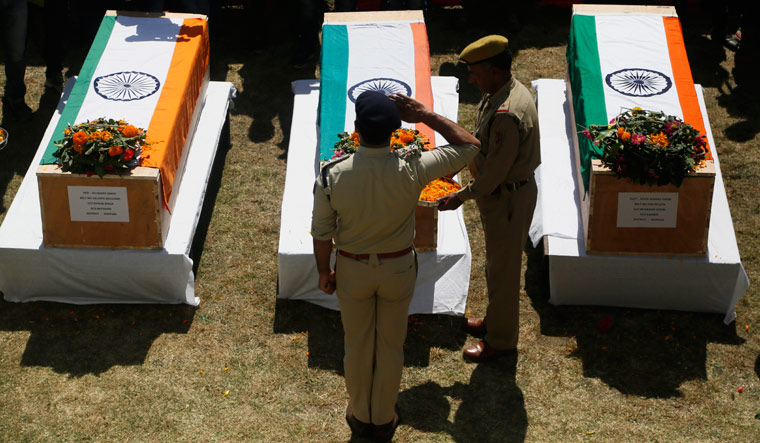 The funeral of three policemen who were kidnapped, murdered at Shopian | AP

To instil a sense of confidence among special police officers (SPOs), several of whom resigned in the wake of the killing of three SPOs by militants after being abducted last week, the Jammu and Kashmir government on Tuesday said it would hike the salaries of the SPOs.

The announcement was made by Jammu and Kashmir Chief Secretary V.R. Subrahmanyam at a press conference in Srinagar.

“The salaries of the SPOs will be increased substantially,” Subrahmanyam said.

He also downplayed the resignations by SPOs in south Kashmir, including a woman, after three policemen—Nisar Ahmed Dhobi, Firdous Ahmed and Kulwant Singh—were kidnapped by militants from their homes at Kapran and Buttagund in Shopian on September 19.

Dhobi, Ahmed and Singh were abducted by militants from their homes at dawn and then shot dead 1km away.

''The number of resignations compared with total number of SPOs, who are above 30,000, is negligible,” Subrahmanyam said.

The police rejected the allegations of vandalism as baseless. Additional Director General of Police Muneer Khan told THE WEEK, “Jammu and Kashmir Police is a professional force and it doesn't believe in harassment of anybody. But any relative or friend of a militant involved in illegal activity will be dealt with according to the law.”

After the killing of three policemen, several SPOs announced their resignations from the force in video messages; this included a woman SPO, Rafiqa Akhat. ''I have been working as an SPO for 14 years, but now I am quitting the job out of my own free will,''Akhtar said in a video message that was circulated on social media.

Subrahmanyam stressed that security will be provided to the candidates who will participate in the upcoming municipal and panchayat polls.

He said 300 rooms have been booked for the candidates in Srinagar (central Kashmir) and similar arrangements will be made in north and south Kashmir.

Jammu and Kashmir Governor Satya Pal Malik, in an exclusive interview to THE WEEK, had said security will be provided to all the candidates and in case they are feeling unsafe at their place of residence, they will be provided safer accommodations.

“Apart from security and safe locations, each candidate will be provided an insurance cover of Rs 10 lakh,'' Malik told THE WEEK.