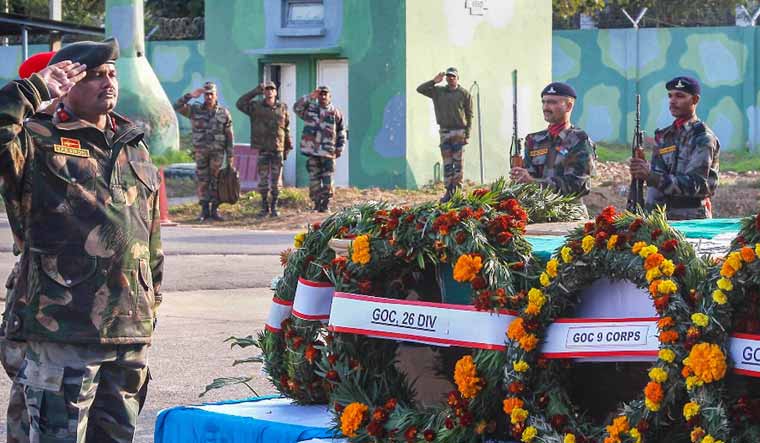 The Shiv Sena on Friday targeted the Narendra Modi government by questioning the "efficacy" of the 2016 surgical strike and said the perception that it would demoralise Pakistani terrorists remained an "illusion" as Indian soldiers continue to get killed in terror attacks in Kashmir.

Accusing the Modi government of boasting about how Pakistan was straightened out after the surgical strike, the Sena sought to know whether it has really happened.

It also observed that troubled borders were not good for the country's well-being.

The Shiv Sena's remarks come in the wake of the death of an Army soldier from Maharashtra, Naik Sandip Raghunath Sawant, who was killed during a counter-insurgency operation in Jammu and Kashmir on Wednesday.

"The New Year did not begin on a positive note in Kashmir. Our jawan from Satara, Sandip Sawant, attained martyrdom in Kashmir along with two other soldiers. In the last one month, seven to eight jawans from Maharashtra were killed in the line of duty. The Maha Vikas Aghadi government in Maharashtra is not responsible for this," the Shiv Sena said in an editorial in the party mouthpiece Saamana.

The party also questioned whether the situation in Kashmir has improved after the surgical strike and abrogation of Article 370. The party, however, maintained that scrapping Article 370 was a good move.

India had conducted the surgical strike on September 29, 2016, across the Line of Control (LoC) as a response to a terrorist attack on an Indian Army base in Uri sector of Jammu and Kashmir earlier that month.

Without naming the Centre, the Sena alleged, “Circulating news that only the Pakistanis were getting killed in Kashmir will not change the reality as tricolour-draped bodies of Indian soldiers, like Sawant, are reaching their respective villages.”

“There is bloodshed along the Kashmir border and mounting anger among the families of martyred jawans. The perception that the surgical strike will demoralise Pakistani terrorists has turned out to be an illusion. In fact, the (terror) attacks have increased,” it added.

The Uddhav Thackeray-led party accused the ruling BJP of boasting about straightening out Pakistan after the surgical strike. “But has Pakistan been really straightened out? Rather Pakistan has been indulging in ceasefire violations along the LoC every day,” it added.

The Shiv Sena also questioned the government's claim that the situation in Kashmir was under control after the nullification of Article 370.

“It is good that Article 370 was scrapped. Before that, surgical strike was carried out in Pakistan. But has the situation in Kashmir improved? The terror attacks continue. It's only that there is a control in reporting (these incidents),” it said.

The Shiv Sena also alleged that there was no clarity as to what was transpiring in Kashmir after the scrapping of Article 370 and only the media reports of soldiers sacrificing their lives have been coming out from that state. In a veiled attack on the BJP, its erstwhile ally, the Shiv Sena, also accused it of exploiting the surgical strike for political gains.