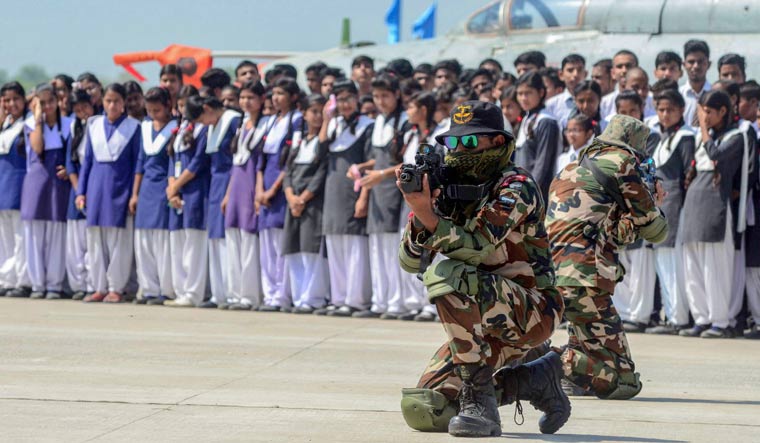 The BJP-led Union government's decision to celebrate the second anniversary of the surgical strike has not gone down well with the armed forces. Several serving and retired uniformed persons have expressed dissatisfaction over the three-day nationwide celebration, named 'Parakram Parv', as they feel it is only aimed at gaining political mileage.

"Army was given a task. It was completed successfully. Done and dusted. After that whatever has happened is all politics, which no fauji is appreciating," said retired brigadier Sandeep Thapar.

Special forces of the Army carried out "surgical strikes" on September 29, 2016, on seven terror launch pads across the Line of Control (LoC) in Pakistan occupied Kashmir (PoK), killing several terrorists. The operation was in response to an attack on the Army camp in Uri by Pakistan-based terrorists, in which 19 Indian soldiers lost their lives.

As serving officers are not authorised to air their views, veterans have come forward to speak up on the issue by stressing that covert operations should always be kept secret and not be talked about to win political battles.

"In case of such cross-border strikes, it is always good to talk less. Surgical strike is a perpetual kind of threat to the enemy. Enemy should always be kept in dark or in suspense over the next move. When you talk about it, you give away something to the enemy. By releasing videos, you are giving away your weapons or route. You are foreclosing some of those options for future raids, if we have to," Thapar said.

Military is also surprised with the government's decision because there were no celebrations last year to mark the first anniversary of the cross-border strike.

"It was a professional task for the armed force. Action spoke for themselves. Celebrating this, to my mind, is beyond this framework," said an officer, who did not wish to be named.

Lt General H.S. Panag, former Northern Army commander, said that there is nothing to celebrate. "We have done such operations on the Line of Control earlier also. And these are all local and tactical-level operations. It happens quite regularly. But this time we declared it. It was just a demonstration and a message to Pakistan that we can do such act," Panag told THE WEEK

He added: "But (we) did not succeed in achieving the strategic aim of the surgical strike. First, Pakistan Army has ridiculed the strike and continued to send infiltrators. Second, they even stepped up the insurgency in Kashmir valley. Ten days before the second anniversary, they mutilated the body of a BSF jawan. And three policemen were killed in Jammu and Kashmir. Pakistan has paid scant attention to whatever warning you gave them."

However, the defence ministry claimed that the surgical strike conducted in 2016 had strategic ramifications and were aimed to dissuade the inimical adversary from adopting the path of violence and to ensure an environment of peace for the nation.

The three-day celebrations over this weekend will be held in 51 cities all over the country and the main event is happening at the India Gate in Delhi. The three defence forces—Army, Navy and Air Force—will be taking part in the mega celebrations.

READ MORE: Army Chief Rawat says there is need for another surgical strike

Public exhibitions including a ‘selfie wall’, showing representative videos and a portion of the original footage of the strikes, and stalls displaying equipment of the three defence services are being organised at the events.

Several colleges and educational institutions have planned the celebration after the University Grants Commission (UGC) issued a circular to all universities regarding this. They will conduct talk sessions by ex-servicemen about sacrifices by the armed forces, special parades by the NCC and exhibitions among other events.

In Delhi, the event will be opened from 11 am to 10 pm on Saturday and Sunday. Military equipment including seized weapons of militants would be displayed.

Maj Gen(retd) Satbir Singh, who led the campaign for implementation of One Rank One Pension (OROP), said, "Surgical strikes are carried out routinely by our armed forces. It is part of our training. In 2016 also, our armed forces carried out an excellent operation. Yes, our soldiers should be congratulated for such operations, but it should happen in a different manner. We do not want the government to use surgical strikes for deriving political advantage. The government should not look at us as just a vote bank."