India has forgotten "Kashmir war" due to COVID-19, the Shiv Sena claimed 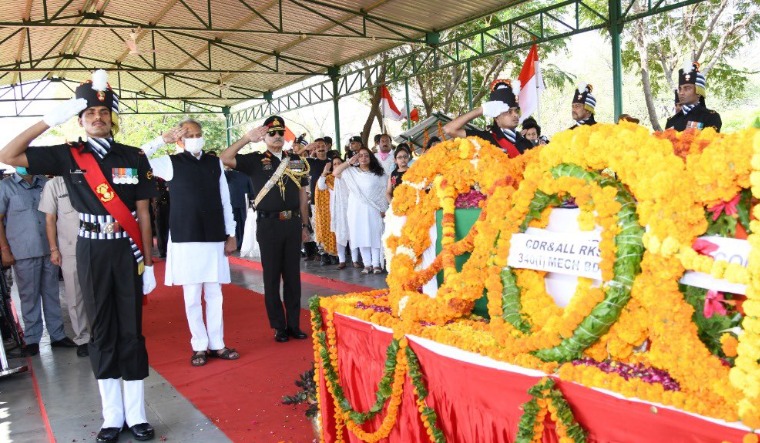 The Shiv Sena on Tuesday pitched for a surgical strike without tom-tomming about it to avenge the killing of five security personnel in an encounter with terrorists in Kashmir’s Handwara area two days ago.

It is not a good sign that the brave men were killed in one go on India’s own land, an editorial in Sena mouthpiece Saamana said, adding that this happened when a strong and quite patriotic government is in power at the Centre.

The country has forgotten "Kashmir war" due to the war situation triggered by COVID-19, but Pakistan has not, the former NDA constituent said.

Noting that the armed forces recently saluted the efforts of frontline workers in the battle against COVID-19 by conducting flypasts and showering flower petals on hospitals, the Shiv Sena said the fight against coronavirus and the appreciation of policemen, doctors and nurses will continue, but Kashmir cannot be “ignored".

"Let there be a surgical strike without tom tomming about it to avenge the martyrdom of the five jawans. It is not a good sign that five of our jawans are killed in one go,” the party said.

India had carried out retaliatory surgical strikes on seven terror launch pads across the LoC, with the Army targeting terrorists preparing to infiltrate from PoK after the Uri terror attack in September 2016.

Opposition parties like the Congress had later accused the BJP of using the surgical strike for political gains. "Our jawans are getting killed on our own land. It is happening at a time when a strong and quite patriotic government is in place in Delhi (Centre)," the Shiv Sena said.

Without naming any party or government, the Shiv Sena said somebody should also shower petals on the kin of the five security personnel killed in the Handwara encounter.

It said the security personnel who made supreme sacrifice for the country included a Muslim, and asked those who are into Hindu-Muslim politics not to forget this.

An Army colonel and a major were among five security personnel killed in an encounter with terrorists at a village in north Kashmir's Handwara area two days back.

The Shiv Sena said Colonel Sharma’s daughter marked her birthday on May 1 and he died protecting the country on May 3.

There was lockdown in Kashmir ever since Article 370 was scrapped (last year) and the infiltrators carried out attacks during lockdown, the Marathi daily said.

“It has to be admitted that the Article 370 could be scrapped because of the strong intentions of Prime Minister Narendra Modi and Union Home Minister Amit Shah. But, the killings of Indian soldiers still continued there,” the Shiv Sena said.

“What is the use of only paying tributes to soldiers who achieve martyrdom in Kashmir?” it asked.

“The bodies of the five personnel were kept wrapped in the tricolour at the Handwara military camp and the picture of it gave pain to people of the country,” the Shiv Sena said.

"The picture stifles the slogan of Jai Hind in the throat itself. The land of Kashmir is soaked with the blood of Colonel Sharma and other brave soldiers at a time when the Indian Army showered flowers on COVID-19 warriors. This is not a good picture, is what we can say,” it added.

Col Ashutosh Sharma, who was killed during the anti-terror operation in north Kashmir, was cremated with full military honours in Jaipur on Tuesday morning.

His wife, Pallavi Sharma, and brother lit the funeral pyre at a cremation ground in the presence of other family members and Army officers.

They consoled Col Sharma's family members as Pallavi put up a brave face and greeting them with folded hands.

He is the second commanding officer of the 21 Rashtriya Rifles who lost his life in combating terrorism.