During a cordon and search operation, an encounter with militants had ensued 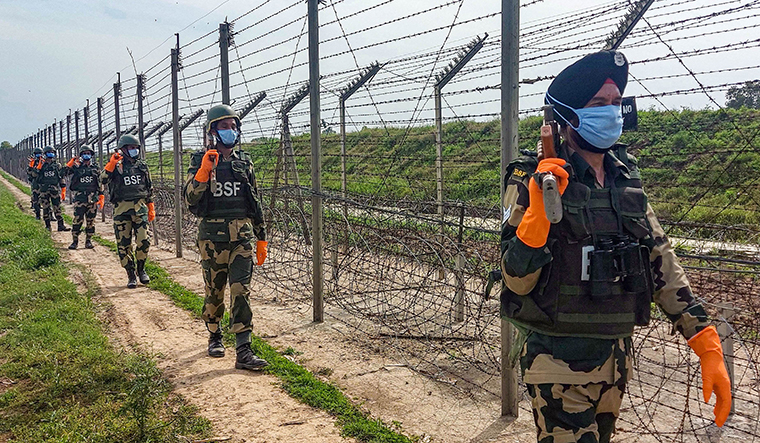 Border Security Force (BSF) soldiers wearing masks, in wake of the coronavirus pandemic, patrol along the international border on the outskirts of Jammu | PTI

An Army colonel, a major, two jawans and an SI of J&K police were among five security personnel killed in an encounter with militants at Handwara in Kupwara in north Kashmir on Sunday. Two militants were also killed in the encounter that started on Saturday afternoon. The encounter took place at Chanjimula village at 3.45pm after security forces received intelligence about the presence of militants in the village.

After the initial contact with militants, a contingent of Army and police moved closer to the hideout and engaged militants in an intense firefight to prevent the militants from fleeing to Rajwar forests. There was a lull in fighting for some time. Then, five security personnel, including Colonel Asutosh Sharma, Major Anup Sood, two soldiers of the Army and SI of police Muhammad Sagir Qazi lost contact with the other security men involved in the encounter due to bad weather.

Colonel Sharma was the Commanding Officer of the 21 Rashtriya Rifles and had been decorated for gallantry twice in Kashmir.

Reinforcements were rushed to the spot, including elite paras, to prevent the militants from escaping the site and to rescue security personnel who had lost contact with their colleagues. Due to weather, the operation was suspended for the night. At dawn, the five security men who had lost contact were found dead. Bodies of two militants, both foreigners, were also recovered.

Army spokesman in Srinagar Colonel Rajesh Kalia said in a statement that, based on intelligence input that terrorists were taking civilian inmates of a house in Handwara hostage, a joint operation was launched by Army and Jammu and Kashmir Police on May 2, 2020. A team comprising five Army and J&K police personnel entered the target area occupied by the terrorists to evacuate the civilians. The team successfully extricated the civilians. However, during the process, the team was subjected to heavy fire by the terrorists. In the ensuing firefight, two terrorists were eliminated and the team of five security forces personnel, consisting of two Army officers, two Army soldiers and one J&K police SI attained martyrdom in service to the nation.

There are reports to injuries to three to seven security personnel also.

This is the second time since April 4 when the Army has suffered a setback in an encounter with militants. In April, four Paras troopers (special forces) were killed in an intense hand-to-hand fight with militants in a gorge at Keran near the Line of Control (LoC) in Kupwara. The paras were heli-dropped after Army had isolated the militants into a gorge soon after they infiltrated from Pakistan occupied Kashmir (PoK).

This year, the security forces have killed 50 militants, most of them in south Kashmir, 34 since the beginning of the lockdown.