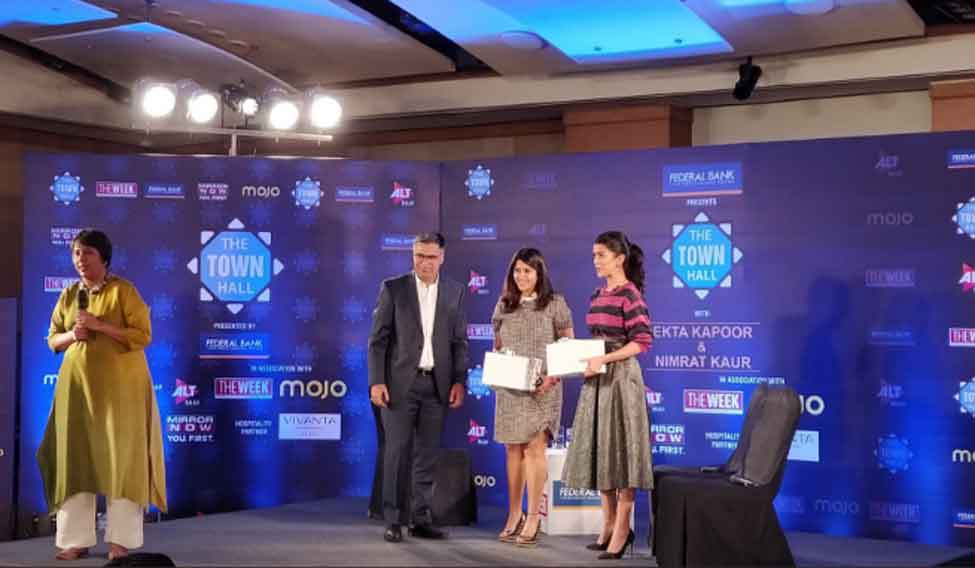 The Townhall, presented by Federal Bank in association with MoJo, THE WEEK and ALTBalaji

Ekta Kapoor has come a long way since her Kyunki Saas Bhi Kabhi Bahu Thi  days. People still associate her with the K-series that once ruled Indian television, but they are now witnessing an evolved Ekta, who isn't afraid to bring out "radical" content for viewers.

The radical content in question is the web series The Test Case, in which Nimrat Kaur plays India's first woman combat officer training to be in the Special Forces.

Ekta Kapoor and Nimrat Kaur joined THE WEEK's contributing editor Barkha Dutt at the fourth Townhall jointly hosted by MoJo and THE WEEK for a discussion on women breaking barriers in the entertainment industry—a field that is dominated by men.

Nimrat's involvement with the project can be called a reverse case of life imitating art. Her father served in the Army, and was posted in Jammu and Kashmir when he was slain by terrorists. She was 11. She says that being an Army kid is a leveller. The fact that she is an Army kid can't be taken away from her. Yet, she thought that serving in the Army was only meant for men despite having a strong desire to join it since she was in school.

So, what does the uniform mean to Nimrat? "A strange combination of nostalgia and haunting memories from the past, but it's so much more than anything I could say in words," she says. She added that the only time she took home a costume from sets was the uniform she wore in The Test Case.

The difficulties that spunky, successful women like Ekta and Nimrat face in the industry are universal. Women are still not considered suited for armed combat. Two retired Army women— Major Shivkami and Major Sarita—who were among the audience, came on stage to give their two cents on the matter; yes, it is high time. And The Test Case should hopefully encourage young women to join the Army.

However, it's not as easy as it looks for women to charge their way through a male-dominated world. These women have experienced that success comes at a price, but they aren't going to sit and mope around for things to change.

Ekta says that her passion for her work and strength are often mistaken for aggression. She says she won't wait around for people to hand her stuff while she waited coyly. Nimrat too chips in and says that any strong reaction from her would prompt the reaction "You're PMSing" from others. Such traits are often seen as admirable in men and undesirable in women.

Ekta hopes that the mindset will soon change. She is afraid that, in five years, people are going to write off Alia Bhatt for being too old, while the Khans continue to make blockbusters even in their 50s.

The MeToo campaign also found mention in the discussion. Both Ekta and Nimrat supported the movement despite opinion from an audience member that it was turning into a witchhunt. However, power and gender needs to be taken out of the equation because predators are not only rich powerful men; there are people on the other side of the fence too.

The Test Case, which is available on the ALTBalaji app, is a bold attempt at bringing forth the efforts of a woman officer training to be a commando. Ekta stresses that television and the saas-bahu serials helped bring out the voices of women, though they were often criticised as regressive. Nimrat believes that with The Test Case, they would be able to bring about a positive change in people's mindset, as against the prevailing norm of boxing women into certain roles. And we couldn't agree more.

The Townhall is presented by Federal Bank Ltd in association with MoJo, THE WEEK and ALTBalaji, with hospitality partner Vivanta by Taj, Cuffe Parade and media partner Mirror Now.