I was homeless and famous at the same time: Kangana 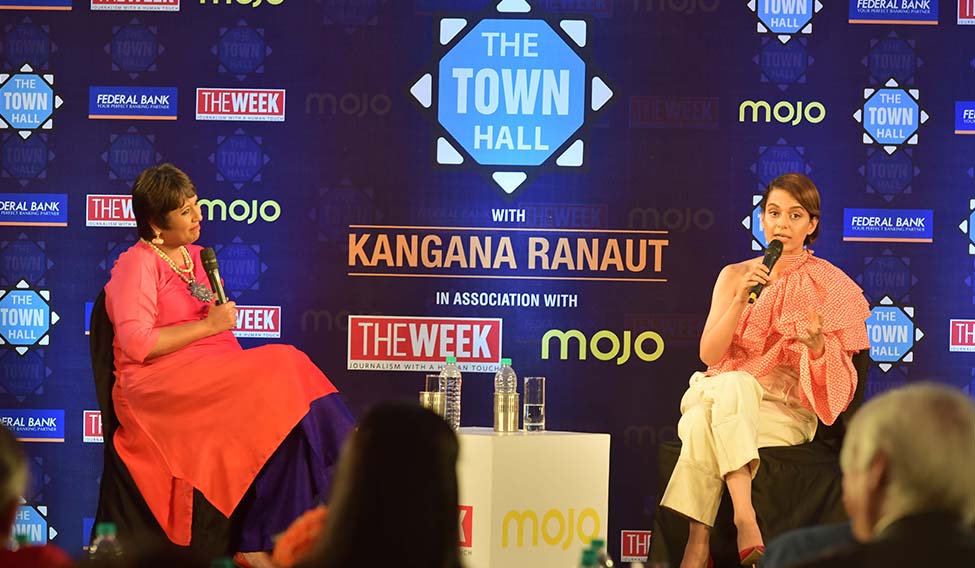 Some may call Kangana Ranaut controversy’s favourite child. They may not be that far

Some may call Kangana Ranaut controversy’s favourite child. They may not be that far off. Kangana’s journey in B-town since her debut in Gangster has been nothing less than a roller-coaster ride. Open secrets and gossip storms are there for everyone to see in the papers and entertainment portals. But unlike most celebrities, Kangana has taken on some biggies in the industry with great resolve and spirit. She has, perhaps, proved that she has more balls than some of the men she has taken on.

Mojo and THE WEEK’s Townhall event brought together two of the grittiest women among us today – Barkha Dutt and Kangana Ranaut. Cans of worms were opened and dissected; Butts were kicked and names were taken. Kangana, as always, didn’t shy away from answering unnerving and uneasy questions.

“I am a year younger than his daughter,” Kangana opened up as she talked about Aditya Pancholi. “The world that I had just come to was very new. I remember meeting his wife and I said ‘please save me, I’m younger than your daughter, I’m a minor. I can’t tell my parents’. You know what she said? She said ‘For me, the greatest relief is that he doesn’t come home anymore’.” Kangana eventually went to the police and sought help.

She talked at length about the abuse she faced at the hands of Pancholi. He got her gifts, an apartment, a driver and slowly cut her off from her friends. “It was too good to be true. But then you realise that people who abuse you, first isolate you.” She would climb out of the window of her first-storey apartment and walk aimlessly around the streets in Mumbai. In fact, she remembers an instance where she ended up in front of Shatrughan Sinha’s house and the watchman recognised her. “I was homeless and famous!”

An affair we all remember

Her affair with Hrithik Roshan blew up in 2016, and both actors had flung accusations at each other like a game of ping pong.

“I put everything at stake for this legal battle,” Kangana said of the entire episode or what she referred to as ‘a bizarre nightmare’. “He was spending his father’s money. I was spending my money for lawyers!” Hrithik Roshan allegedly threatened to leak her images and private videos if she didn’t apologise for referring to him as the “silly ex”.

Kangana believed that the truth is on her side and it will eventually surface despite the smear campaign that Hrithik and his father, Rakesh Roshan had launched. She is, in her own words, relieved that he had dated a dumb guy and not someone who could have used their fame and power to frame her and possibly put her in jail. The cyber cell’s verdict was that Hrithik’s accusations of an impostor had no weight. It was understood that it was his desperation trying to cover up the affair, while going through a divorce and Kangana didn’t understand the politics behind it. She refers to this whole affair as the most traumatic phase of her life.

From this whole incident, Kangana does have an advice to those thinking of having an extra marital affair – don’t. When a married man has an affair with a single woman, the woman isn’t cheating on their husbands. “Guys, please refrain from extra marital affairs!”

Taking on powerful people in Bollywood has been difficult for Kangana. For someone who doesn’t have a godfather in the film industry or a star father, she has put her career at stake to look straight in the eyes of Bollywood biggies and not let them push her into a corner. Kangana openly called Karan Johar “the flag bearer of nepotism” on his talk show. It snowballed into an issue that has clearly not been put to rest even now as evidenced by the little show that Johar, Saif Ali Khan and Varun Dhawan put up at the IIFA awards this year. She also got some of them, if not all, to apologise for it.

So, does she believe that she has risked her career by ticking off someone like Karan Johar? Doesn’t seem like it.

“Karan is harmless. He may not work with me, but that is fine,” Kangana says. “If I don’t work with Karan Johar, I’m not missing out on anything.”

Your form could not be submitted.
This browser settings will not support to add bookmarks programmatically. Please press Ctrl+D or change settings to bookmark this page.
Topics : #Kangana Ranaut