I'm not a learned man, but I'm a go-getter: Nitin Gadkari 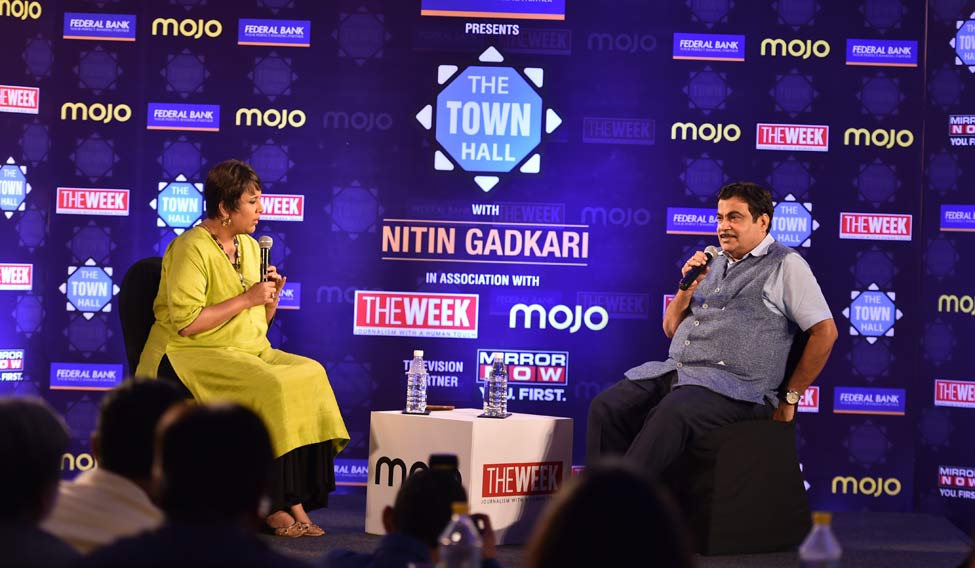 "Why are petrol and diesel prices so high when the price of crude oil has come down considerably?"

"I believe you are asking the wrong person to answer that question. You are going to have to ask either the finance minister or the petroleum minister," replied a good-humoured Nitin Gadkari.

The road transport and highways minister was at his candid best at the second edition of the Townhall presented by Mojo and THE WEEK.

Nitin Gadkari is not someone who needs a formal introduction. Barkha Dutt referred to the minister as a personal favourite guest as he is not one to shy away from uncomfortable questions. THE WEEK's Delhi Chief of Bureau, R. Prasannan attested to the fact when he addressed the crowd present at the Oval Room in Hyatt Regency as he welcomed Gadkari.

Gadkari calls himself an old-styled politician who would let his work speak for him. However, that did not stop him from talking about the BJP government's projects and policies, including demonetisation, decisions with regard to farmers' crisis and the Goods and Services Tax, among other things.

So, does the government believe that demonetisation was a success? Gadkari says that it does. Any policy that the government introduces will be scrutinised and bashed before its effects start showing. Digital economy has made it possible to double the tax base, which is the taxable income for the common income tax payer. It is the same with the GST. Teething issues are part of any new scheme or reform. Prime Minister Narendra Modi, he says, has directed all ministries to work with the financial ministry to sort it out. "These are some of the biggest economic reforms that will have long-term benefits," Gadkari says.

And one can't help but ask, as Barkha did—for whose benefit is the BJP deciding what people should and should not eat? The minister, who calls himself a foodie, says the government does not have a problem with what people chose to eat. "We have certain sentiments for the cow and want to ensure its protection. We do not encourage its slaughter. We merely want this sentiment to be respected. Apart from that, the party does not want to decide if people should or shouldn't eat non-veg food."

Gadkari is quite straightforward and honest in his conversations—something you don't see in every politician. He admits to being a friend to everyone—even Delhi Chief Minister and Aam Aadmi Party chief Arvind Kejriwal. His disagreement with people's ideologies doesn't reflect on his friendship with them. He recalls an incident from when he was made the party president. He met the late CPI leader A.B. Bardhan and touched his feet. "I may not agree with their ideologies, but I respect those who believe in their ideologies. In politics, it is not opposing ideologies that is the problem, but the absence of it."

On that note, what is Gatkari's opinion on Rahul Gandhi, whom his party once referred to as 'Amul baby', as a political leader? "Kaafi weak hai," he replied to evoke laughter. He brushes it aside to stress on his point that Rahul is not a seasoned politician and relies heavily on dynasty politics.

The BJP has no shortage of seasoned politicians, and yet, despite being the ruling party, still behaves like the opposition. He chuckled and says that the BJP is so used to having been in the opposition for so long, it is taking time to adjust. The opposition genes come up sometimes just like we reminisce of the "good old days".

Gadkari, however, is in no mood to sit and reminisce the good old days and is working on overdrive with the additional charge of the Namami Gange Programme—the river Ganga rejuvenation project. The BJP's confidence in the minister is immense as they expect him to do the impossible—the way he was in developing the road infrastructure in the country.

"I'm not a learned man nor am I highly educated," he said. "But I'm a go-getter. I work hard and I will do the work that has been entrusted to me." He says his expertise lies in the infrastructure sector and he is happy doing the things he is competent to do. "Though, I must admit that the flaw in my ministry is that I'm in charge of highways alone!"

Despite his commitment to make road infrastructure better, projects are either delayed or poorly executed and even abandoned after a period of time. He says 80 per cent of those projects are delayed because of bureaucrats and red tape. He cites the examples of the parking space in Parliament that took 11 months to be cleared and the projects in the north east, especially Arunachal Pradesh, that hit roadblocks because of environmental clearances.

Gadkari is confident that the BJP government will focus on and prioritise national security, electric transport, agricultural reforms and economic growth, which he says will go up to 7.5 per cent in six months.

The latest edition of Mojo and THE WEEK's Townhall with Gadkari was highly entertaining and honest. "I'm not a Dilliwala," Gadkari said in a room almost full of Dilliwalas. "I don't make friendships for benefits." Barkha amiably reminds him that the Dilliwala is "yaaron ka yaar".