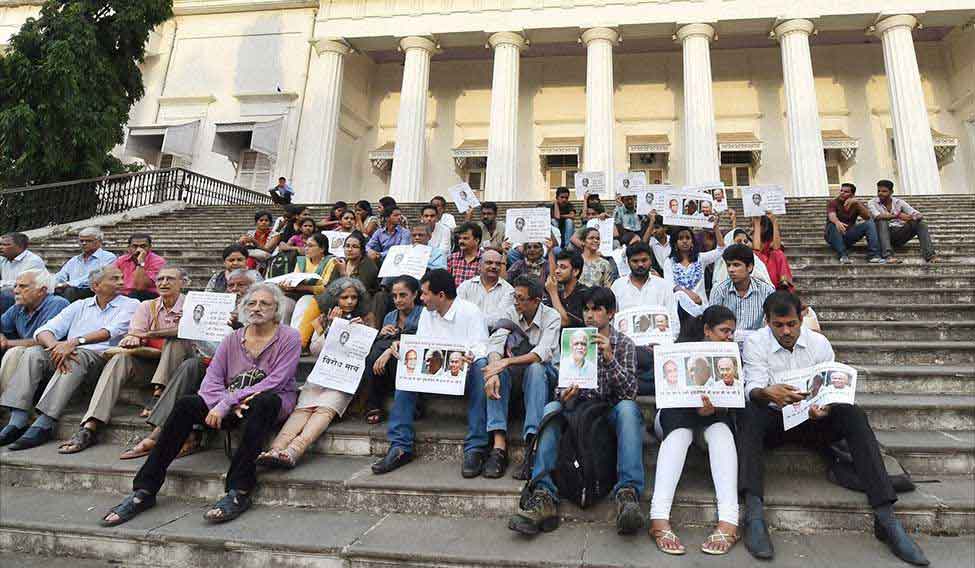 Demanding justice: A protest in Mumbai against the killings of Kalburgi, Pansare and Dabholkar.

In April 1999, Jayant Balaji Athavale, a 56-year-old consultant hypnotherapist in Mumbai, founded Sanatan Sanstha, an organisation devoted to studying spirituality and spreading awareness about it. According to its website, the aim of the Sanstha is to “impart spiritual knowledge to the curious in the society, inculcate religious behaviour in the masses and provide personal guidance to seekers for their spiritual uplift”.

Over the past 16 years, the Sanstha has grown into a prominent right-wing organisation, and Athavale has become His Holiness Dr Athavale to his followers. The Sanstha’s headquarters in Goa, which calls itself ‘Spiritual University’, is home to about 250 sadhaks, or full-time volunteers, most of whom are aged between 30 and 35. It is from here that the organisation publishes its mouthpiece, Dainik Sanatan Prabhat, which claims to have more than 95,000 subscribers. “The sadhaks are engaged in prabodhan, or spreading awareness about Hindu religion and Indian culture. Andolan, or protest against those who tarnish the religion, is also part of their work,” said Virendra Marathe, the Sanstha’s managing trustee.

According to him, the Sanstha aims at solving people’s problems by suggesting “spiritual remedies”. “People tell us their problems, which are usually related to family, health, finance and emotional issues,” he said. “We ask them to do namasmaran, to chant the name of their family deity.” The belief is that a person’s life is influenced by his deeds in past lives or by the deeds of his forefathers. “Difficulties in married life, or difficulties in getting married, or having only girl children is an effect of past lives,” said Marathe.

“Thousands of seekers under the guidance of the Sanstha,” says the organisation’s website, “sacrifice their mind, body and wealth to participate in Sanatan’s mission to spread spirituality in society.” Indeed, they do. Take the case of Yatin Bele (name changed), who had a workshop at MIDC area in Nashik that catered to automobile and ancillary units. A self-made man who aspired to make it big, Yatin took a loan to buy state-of-the-art machinery for the workshop. “The machinery I bought had problems right from the beginning. There were breakdowns almost every day. The burden of the loan and its interest was too much to bear, and my reputation with the principal companies was getting affected. It was a time when I thought of suicide many times,” he said.

One of his relatives took him to a meeting organised by the Sanstha. “I liked it and continued going. They made me realise that it was not worth it to strive for such material achievements and be saddened by failures. I sold the entire machinery and workshop,” said Yatin, who now works in a small factory and earns just enough to meet his family’s needs. He says he is happy now.

Not all who have come into contact with the Sanstha are so enamoured of its teachings. Vinayak Kanade (name changed) of Nashik began attending Sanatan Sanstha meetings after he got employed at the Brihanmumbai Municipal Corporation. “My office was till 5.30pm, and I started going to the meetings in the evenings. I also got to know Athavaleji closely. I used to enjoy the namasmaran and meditation sessions,” said Kanade.

Life was smooth for the first few years, until his mother, who was alone at their ancestral home in Nashik, fell ill. “And they [the Sanstha] started preaching about striving for the creation of Hindu Rashtra and about hypnosis. Although I liked and enjoyed namasmaran and meditation, I couldn’t digest the idea of Hindu Rashtra and the talks about hypnosis,” said Kanade, who quit his job and returned to Nashik to take care of his ailing mother.

Despite the professed spiritual nature of its work, Sanatan Sanstha has been linked to cases of violence and illegal activities. In 2008, six persons who allegedly had links to the Sanstha were arrested for planting bombs outside a theatre in Thane. Two of them were found guilty and sentenced to 10 years in prison.

Persons with links to the Sanstha were allegedly behind blasts in Maharashtra and Goa. In 2013, a PIL seeking ban on the organisation was filed in the Bombay High Court. Sanatan Sanstha spokesperson Abhay Vartak, however, denied allegations saying there was an “international conspiracy” to discredit it. “It’s a conspiracy to finish off Hindu organisations. The Varkari Sampraday and Goa chief minister openly support Sanatan Sanstha. But most of the so-called secular media is still desperately trying to isolate and discredit us,” he said.

The shady side of the Sanstha has again come under the scanner with the recent arrest of Samir Gaikwad in the case related to the killing of rationalist Govind Pansare early this year. “Gaikwad and his family have been associated with Sanatan Sanstha since 1998. His wife is staying at the ashram in Goa. Gaikwad certainly knows a lot about the conspiracy to kill Pansare,” said Sanjay Kumar, inspector-general of police. According to him, documents and 31 cellphones seized from Gaikwad’s house would lead to others who were involved in the killing.

“I have talked about Sanatan Sanstha’s possible involvement in the case since the beginning. Pansare’s liberal and secular views were always fiercely opposed by Sanatan Sanstha and other right-wing organisations,” said Milind Yadav, a friend of Pansare.

Said S.M. Mushrif, former inspector-general of police: “Sanatan Sanstha is an organisation closely involved in such acts. A Sanstha disciple, Vikram Bhave, even got convicted in a terror case. The police should probe deeper to nab the masterminds behind Pansare’s murder.”

Virendra Marathe admitted that Gaikwad had been a sadhak of Sanatan Sanstha, but he denied that the Sanstha’s teachings had incited him. “We believe he is innocent. Hence, we have offered him help of the Sanstha’s legal cell,” he said.

Apparently, this ‘help’ has become a major hurdle in interrogating Gaikwad. A battery of 31 lawyers has been deployed to fight the charges against Gaikwad. “Apart from the Sanstha’s lawyers, Preeti Patil, wife of Rudragauda Patil [who was accused in the 2009 Madgaon blasts] and a lawyer herself, is present during the interrogation. They have been a nuisance for the police. That is the main reason why Gaikwad has succeeded to avoid many questions so far,” said Mushrif.

The police suspect that Gaikwad had links to the murderers of rationalist Narendra Dabholkar in Maharashtra and writer M.M. Kalburgi in Karnataka. The National Investigation Agency, after questioning Gaikwad, has concluded that it was Rudragauda Patil who masterminded the Pansare killing. “The call records, the documents seized and the interrogation lead one to believe that the conspiracy was hatched in Sankeshwar [in Karnataka], where Gaikwad and Rudra met a few others,” said an NIA officer.

The investigators say Gaikwad has admitted to his involvement in the Pansare killing. “Now the major task for the investigators is to gather material evidence against him and to nab the real masterminds and shooters involved in the crime,” said Milind. “Sanatan Sanstha’s complicity in the crime and the fear of having its higher-ups arrested are evident from the way it is defending Gaikwad.”