It was unprecedented. A crowd of around 2,000 from the village of Karhati in Pune district gathered together on January 4, 2015, and blocked the main road from Morgaon to Baramati, the pocket-borough of the Pawar family. Every single household in the village took part in the agitation. The villagers were shouting slogans against Nationalist Congress Party leader Sharad Pawar and his nephew Ajit, who was deputy chief minister of Maharashtra. “We had all voted for Ajit dada in the assembly elections a few months ago, but we got cheated,” said Mahadeo Khandale, a villager. The villagers are angry about Ajit Pawar's takeover of the Krishi Udyog Mool Shikshan Sanstha, an institution revered by them.

The KUMSS trust was set up in 1951 by Achyut Jagannath Agarkar and his wife, Usha, for a new system of education based on agriculture. Agarkar, called babaji by the villagers, wanted to teach agriculture in a scientific manner. “Our parents were illiterate and poor, but babaji asked the villagers to send their children to school. Mataji [Usha Agarkar] served us food in the school,” said Krishna Lonkar, a former headmaster. D.R. Vaidya, a landlord, donated eight acres on the banks of the river Karha and Agarkar built the school with generous donations from his friends. The government gave 73 acres and seven gunthas [one guntha is nearly 2.5 cents] of forest land. A hostel was built for students from poor families and they were given high-quality education with agriculture as one of the subjects. 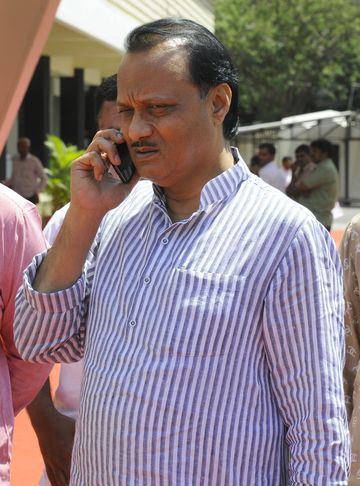 People of Karhati village say Ajit Pawar has cheated them

“In mid-2005, Ajit Pawar came to our village to inaugurate a branch of the Pune District Cooperative Bank. He was amazed to see the lush green farm on the river banks with main road frontage. He was even more astonished to know that it belonged to the school,” said Khandale. Immediately after the inauguration, Pawar went to the school and told Arvind Wabale, the vice chairman of the trust, that he wanted to be a member of the trust. The villagers and the trust were happy to accede to his request.

On November 5, 2005, Padmatai Sidhaye resigned from the trust’s chairmanship citing health reasons and, on November 26, Pawar took over as chairman. “That proved to be the 26/11 of our school,” said Khandale. A year later, on October 22, 2006, Pawar held a closed-door meeting of the trust, which allowed him to continue as chairman for the next five years. “The resolution passed at the meeting showed the presence of 94 members, but hardly a few were present,” said Khandale. The resolution, for instance, said that the social activist Vidya Baal had attended the meeting. THE WEEK has a copy of Baal's letter which says she “was not invited and had not attended the meeting”.

Right to Information activist Ravi Barhate said a resolution passed at a meeting on March 11, 2006, which was attended by Pawar and eight other members of the trust, decided to construct a new school building with 22 rooms. “This was a move to demolish the hostel and there was no mention of creating any other provision for the accommodation of poor students,” said Barhate.

THE WEEK has copies of two different resolutions on one agenda—“Tying up of the KUMSS trust and its schools at Karhati and a school at Dhakale village with Vidya Pratishthan, Baramati”—passed in a meeting held on April 15, 2007, which was chaired by Wabale. One of the resolutions said the financial condition of the KUMSS was weak and it was impossible to pay salaries and provide basic amenities. It said the trust could not develop the land because of financial problems and hence it was decided to “tie up the KUMSS and all its land, buildings and staff unconditionally with Vidya Pratishthan, Baramati”. Vidya Pratishthan is an educational trust headed by Sharad Pawar. The other resolution was on the same lines and it said the KUMSS's land was to be “given on a 99-year lease to Vidya Pratishthan at Rs25,000 per year”.

A copy of the order dated August 28, 2014, issued by the district collector, transferring the KUMSS land to Vidya Pratishthan.

THE WEEK has copies of two affidavits signed by 12 staff members, including the principal of the KUMSS school, giving their consent for the permanent transfer of the school and the staff to Vidya Pratishthan. The vendor’s seal on the stamp papers on which the affidavits were filed showed that those were bought on April 4, from a vendor called Anil Tilekar. The date on which the stamp papers were issued by the local treasury to Tilekar, however, was April 29. How can a vendor sell a stamp 25 days before he himself got it from the treasury? Moreover, April 29 was a Sunday, on which the treasury would have remained closed.

Barhate filed a complaint at the Baramati city police station against the Pawars on December 18, 2014, about the use of suspicious stamp papers. But, the police sent him a letter on December 25, saying the matter was not in their jurisdiction. “This is a civil matter and is in the jurisdiction of the charity commissioner. You may approach the appropriate authority,” said the letter. “This reply clearly shows that the Pawars have an iron grip over all these departments,” said Barhate.

Trimbak Chandgude, a villager, said the KUMSS had applied to the charity commissioner in May 2008 to allow its land to be sold to Vidya Pratishthan. The application was denied. A few months later, however, the KUMSS signed a lease agreement for 99 years with Vidya Pratishthan. “Giving government land on lease for more than 29 years was illegal, but this was typical Ajit Pawar style,” said Barhate.

Chandgude said documents received under the RTI act showed that the district collector had asked the tehsildar about the transfer of land to Vidya Pratishthan. “The collector forwarded the application favourably to the revenue ministry,” said Barhate. He said the revenue ministry had asked the collector why the government should not take the land back and auction it if the KUMSS did not want it, but the collector again recommended in favour of Vidya Pratishthan. THE WEEK has a copy of the order dated August 28, 2014, issued by the collector, to transfer the land to Vidya Pratishthan. Wabale, being deputy chairman of the KUMSS, came to know about it and told the villagers. They were furious and told Pawar that they were against the move. He then invited the villagers to meet him at Sayambachi Wadi, a nearby village.

“He said he would leave the land and the KUMSS if we were against the move. But, he asked us to vote for him first,” said Khandale. Although the villagers kept their end of the bargain, the tehsildar transferred the KUMSS's property and gave possession receipt to Vidya Pratishthan on November 19. However, the very next day, the charity commissioner issued an order cancelling Pawar's appointment as chairman of the KUMSS.

“There are gross violations of the revenue code,” said a senior revenue official. There is no policy in place for the transfer of government land from one trust to another. Moreover, permission from the forest department is necessary if forest land is to be transferred and no construction can be done on forest land without the prior approval of the empowered committee appointed by the Supreme Court.

Revenue Minister Eknath Khadse said he would take strict action against the violations of the revenue code and act. “A police investigation should be initiated about all other allegations,” he said. Khadse said Pawar, in his arrogance and greed, had overruled every legal course and grabbed the property which belonged to the KUMSS. Pawar did not respond to THE WEEK's queries on this issue.

Eighty-five-year-old Sopan Bhandelkar folds his hands whenever Agarkar's name is mentioned. “Babaji and mataji gave their life to educate our children and changed our fortunes,” said Bhandelkar, who once worked with Agarkar. “I am ready to give the rest of my life to ensure that his school stands tall in all its glory. I want to see once again children studying in the school, working on the field.”

Your form could not be submitted.
This browser settings will not support to add bookmarks programmatically. Please press Ctrl+D or change settings to bookmark this page.
Topics : #Ajit Pawar | #Maharashtra