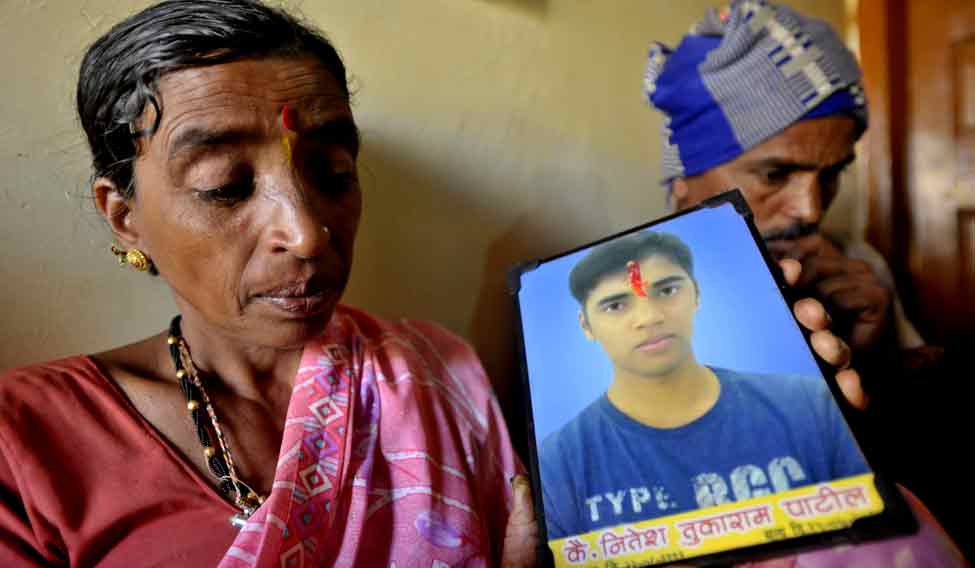 Sorrow unbound: Nitish's parents, Vanita and Tukaram, are yet to come to terms with their son's death | Janak Bhat

The tehsildar’s office in Kolhapur, located inside the district collector's office compound, was crowded. Around 20 people from Poregaon village had travelled nearly 120km to meet Sunita Nerlikar, the tehsildar. Tukaram Patil, a 48-year-old man who had lost his son in an accident in Oman, was pleading with her, “Keep all the money, but give me back my son.” She had misplaced the demand draft sent by the insurance company in Oman as compensation for the accidental death of 24-year-old Nitish. Tukaram could not control his tears—it was his 22nd visit to the tehsildar’s office in eight months. “Madam had no reply and was uneasy. She was extremely rude to us during all our previous visits,” he said.

Nitish went to Oman after completing a diploma course in electrical engineering. His uncle Parasharam Patil, who had worked in Saudi Arabia for a few years, helped him find a job in Oman. “My friends helped Nitish to find a job as an electrician in the National Gift Market in Al Buraimi city,” said Parasharam, who had to leave his job after losing a leg in an accident. Nitish left for Oman in March 2010. “He was promoted in June 2014, as he had impressed his seniors with his hard work and honesty,” said Parasharam. Nitish was staying with his colleagues in a dormitory. On July 14, he had gone out to buy bread and eggs for dinner. A speeding car knocked him down when he was crossing the road. Nitish died on the spot. “His roommates informed his employer and we came to know about the tragedy on July 15,” said Parasharam. “Nitish was only 24 and his parents depended entirely on the money he used to send every month.”

When THE WEEK met Tukaram at his small house in Poregaon, he was sitting in an empty room with no lights. “We cannot afford to eat twice a day and we do not feel like eating even when we get a chance. Nitish’s face keeps appearing before my eyes all the time,” said Tukaram. Vanita, his wife, appeared at the door. A frail woman, she is yet to come to terms with her son's death. “Unknown people in a foreign country worked faster to help us. They sent the DD within four months, but our own people are very rude and insensitive,” she said. “They lost the DD and are forcing us to live on an empty stomach.”

It was Parasharam who first filed an online petition for compensation as he was aware of the procedures involved. “Tukaram sold whatever he had and borrowed 14 lakh to pay the lawyer in Oman to fight the case,” said Parasharam. The lawyer, Mohammed Irani, was helpful. The Oman government, too, proved helpful and the insurance company was made to pay the compensation. “We received a letter from the Indian embassy in Oman in January that a demand draft for 123,39,274, drawn in the name of the district collector, Kolhapur, was sent on January 29,” said Parasharam.

Tukaram said when he saw the letter he felt as if Nitish was supporting the family even after his death. But his hope soon turned into dismay after the family went to Kolhapur to inquire about the DD. “We submitted all relevant documents to prove that we were Nitish's legal heirs. Nerlikar madam said she knew her job and she did not need anyone to teach her. She threw us out,” said Parasharam. Nitish's friend Bharat Gawde said they were treated as if they were following up for lottery money. “These are the most insensitive and the most mentally corrupt officers one can ever see.”

Months later, in May, Priti Gaware, a senior clerk in the tehsildar's office, called the family and told them that the DD had lapsed its validity of three months. “We were asked to try with the insurance company for another DD. But we lost all our hopes when we came to know that the DD was lost,” said Tukaram. Gawde said the district collector came to know about the DD only after it was lapsed and lost. “He told us that the resident deputy collector had informed him about the matter and had written to the embassy in Oman about it.” THE WEEK has copies of the correspondence between the embassy, the district collector’s office and the family.

Parasharam said the tehsildar had received the DD, but she did not inform the collector or deposit it in the bank. “She sat on it until the validity of the DD lapsed and then she lost it. Despite all these, she is rude and arrogant,” he said. And, the family's agony continues despite 22 visits to the tehsildar's office. “The people who lent Tukaram money are after him. How long will they wait? They have already taken away the only buffalo he had and today the family is literally starving,” said Parasharam. When THE WEEK went to the district collector's office in Kolhapur, Nerlikar was on leave, Gaware was not in her seat and the rest of the staff were uncooperative. Said District Collector Amit Saini, “I have written to the embassy, requesting to get a fresh DD issued from the concerned bank. I have also lodged a first information report about the lost DD. We will fix the responsibility and will take appropriate action against the concerned clerks.” He asked his staff to give us a copy of the letter. In a clear case of administrative apathy, while the DD was lost in June, the letter to lodge the FIR was sent to the police on October 9.

Tukaram, Parasharam and Gawde went to the district collector’s office again on October 19. “The moment we entered his room, he started shouting at us and said he was not sitting there to reply to our questions. He said he would throw us out and called police,” said Parasharam. Tukaram was crying, hurt by the manner in which he was treated. “We are poor, but we also have self-respect. We are not begging. They have harassed me till now and they are now shouting at me and throwing me out,” said Tukaram. “Please keep all that money, but give me back my son.”