Cometh the leader, cometh the hour 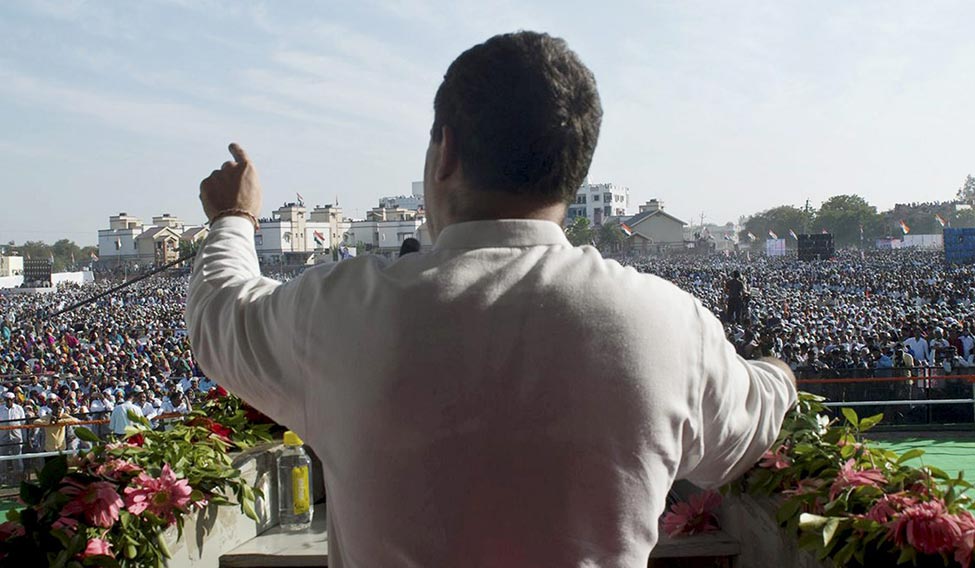 Crowd puller: Rahul Gandhi at a rally in Gujarat | PTI

Thirteen years after he took the political plunge and after a long wait marked by uncertainty, the reluctant politician in Rahul Gandhi has made way to a man on a mission

The mood at the Congress Working Committee meeting on the morning of November 20 was upbeat. On the agenda was approval of the schedule for the election of party president—a mere formality; Rahul Gandhi will take charge of the party in December. Done with the task, the leaders started chatting on the party’s campaign for the assembly election in Gujarat. Rahul was at the centre of the discussion.

The Congress vice president dipped into the Mahabharat to explain his approach to the election. He related the story of Arjuna seeing nothing but the eye of a wooden fish as he shot down the fish to win a contest with his Kaurava cousins. Just as the ace archer had done, Rahul said, the Congress had to keep its focus sharp and anchor the campaign on the issues of development in Gujarat. “We have to be wary of the BJP’s moves to take the agenda to something else,” he told them.

Rahul, 47, would be declared the new Congress president in the middle of electioneering in Gujarat—13 years after he took the political plunge, five years after he was made the party’s vice president, and after a long wait marked by uncertainty. The reluctant politician in him seems to have made way to a man on a mission, as he leads the party’s charge in Gujarat. He had wanted to campaign on Prime Minister Narendra Modi’s home turf as Congress president. But, senior leaders were not so sure, as a defeat in the crucial state would sully his image. However, with the party’s campaign in the state appearing to resonate with the people, and surveys showing that the gap between the BJP and the Congress reducing, there could not be a better time than this for Rahul’s ascendency.

Gujarat is a daunting challenge—it is Modi’s territory and the Congress has been out of power in the state for 22 years. It is also a unique opportunity for the party to overturn the dominant narrative and change the game in the run-up to the Lok Sabha elections in 2019. Leading from the front in Gujarat, Rahul has been attracting big crowds. When he renamed GST as Gabbar Singh Tax, it stuck, especially because the state has a big trading community. He joined traders in Surat for a candlelight march to mark the first anniversary of demonetisation. He has connected with the youth, raising issues of unemployment and the high cost of higher education.

Rahul seems to have finally found his feet as a public speaker. He now exudes a quiet confidence, slips in humour here and there, and does not hesitate to attack “Prime Minister Modiji”. He is not afraid to admit that Modi is a better orator, apparently indicating that the PM may have style, but he has substance.

Those close to Rahul, however, insist that it is not a sudden transformation. “This has to be inherent nature. It cannot be created in a day,” said Sushmita Dev, president of the Mahila Congress. She said Rahul had waited for the right time to launch his offensive against Modi. “He has done things in the right order.”

Rahul unveiled his blueprint for taking on the Modi government in September in Berkeley, where he addressed the students of the University of California. The Gujarat campaign is more or less hinged on the issues he mentioned there—unemployment, expensive higher education and health care, the problems of the business community, farmers’ distress and inflation. Rahul had done his homework for Gujarat. During his yatras through the state over the past three months, he interacted with different sections of society. “These meetings helped in shortlisting the issues that we are now raising in Gujarat,” said an associate.

It was Rahul’s idea that technocrat Sam Pitroda, a family friend of the Gandhis and chairman of the overseas department of the Congress, should campaign in Gujarat (Pitroda is a Gujarati) and make a people’s wish-list for the party’s manifesto. He recently told the party’s social media team in Gujarat to combat fallacy with fact, but to never cross lines of propriety.

Senior leader A.K. Antony’s report on the party’s disastrous showing in the Lok Sabha elections in 2014 had said that one of the main reasons for the party’s decline was alienation of the majority community because of the perceived appeasement of the minorities. Perhaps heeding Antony’s observation, Rahul has visited more than a dozen temples in Gujarat in the past two months, and the Congress has desisted from mentioning the 2002 communal riots. 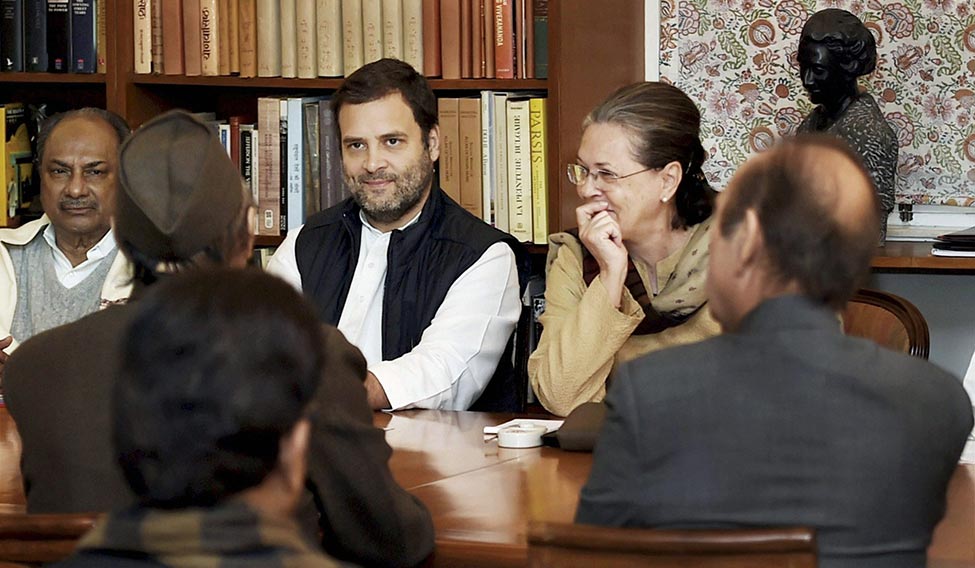 Change of Guard: Sonia Gandhi and Rahul at the Congress Working Committee | PTI

The Congress has polarised the anti-BJP forces in the election by getting young leaders like Hardik Patel, Jignesh Mevani and Alpesh Thakore on board, something it wants to emulate at the national level. “If the Congress makes gains, and there is a drop in the BJP’s tally, a snowballing will start. It will become a rallying point for the opposition to gravitate towards the Congress, which will be significant since Nitish Kumar jumped ship, and opposition unity is not in a very good shape,” said Abhay Kumar of the Centre for the Study of Developing Societies, Delhi.

Offering a counter-narrative to that of the Modi government is the biggest challenge before Rahul. The process started with the Berkeley speech. Changing the media perception, and setting the agenda for issues to be discussed would require effective communication strategies. A new media team has been set up, which functions under the communications department head Randeep Surjewala. And the social media presence of the Congress has undergone a remarkable transformation under actor-turned-politician Divya Spandana.

The ingredients of the counter-narrative are the product of sustained research and brainstorming that a group of Congress leaders have been doing for a while. A new research department set up under Rajeev Gowda has been poring over documents and reports to come up with statistics that can be used to ask questions on the BJP government. Crucial inputs on infrastructure development and the economy have come from Pitroda, and on social sectors from K. Raju, chairman of the scheduled castes department of the Congress. Congress general secretary B.K. Hariprasad said the BJP would be held accountable to the promises it made in 2014. “The government will be asked on what it has achieved on its promises regarding black money, corruption, jobs, education and health,” he said.

After Gujarat, Rahul has to work on ensuring a Congress victory in the assembly elections in four big states—Karnataka, Madhya Pradesh, Chhattisgarh and Rajasthan. In all these states, the party is in a direct fight with the BJP, making the outcome crucial in the run-up to the Lok Sabha elections in 2019. While these polls would set the mood for the general elections, they would also be an affirmation of Rahul’s success or failure as a leader. He has been the de facto president of the party for a while now. And the party has seen a string of defeats during this time, with the exceptions of Bihar and Punjab.

In the long run, Rahul will have to think about regaining the Congress’s lost ground in the Hindi heartland, and in the states it has not been in power for decades. It will be a mammoth task.

Stitching up an alliance before the Lok Sabha elections is another challenge. It was the coalition cobbled together by Sonia Gandhi in 2004 that had helped the Congress regain power. “The biggest challenge is to bring together like-minded parties, going into 2019, and eventually defeat the BJP at the national level, and also tie up with parties in different states,” said Congress leader Milind Deora.

Sonia’s involvement could be crucial here. Rahul’s acceptance among the allies is still not high, and it is Sonia whom they prefer to deal with. There is speculation that she may continue in a mentor-like role. “Sonia Gandhi is our leader and mentor... Her able leadership and guidance will always be available, not only to Rahul Gandhiji, but also to crores and crores of Congressmen and women,” said Surjewala.

A revamp of the Congress at the centre and in the states is expected as Rahul would put in place his own team. Even as he does this, he will have to fulfil his promises of rebuilding the party and bringing in more democracy. He has made experiments earlier, which failed, such as elections in the Youth Congress and the National Students’ Union. “He is a firm believer in decentralisation of power—to the last Congress worker. He pushes for performance-related progression, and to have systems and processes in place to enable this,” said Raju.

The fifth generation from the Nehru-Gandhi family to lead the Congress, Rahul has made it clear that he is willing to deal with the criticism of being a dynast once and for all and get on with his job. “He is sensitive to nepotism. He is pushing for a sea change in this area by making processes transparent, and he wants positions in the party to be capability driven,” said Raju.

However, a dramatic overhaul is unlikely. Rahul is aware of the reservations among senior leaders to the change of guard. His new team is expected to be a mix of the experienced and the young, as has been seen in the new combinations put in place by him as in charge of states. In Gujarat, veteran Ashok Gehlot works with a young Rajiv Satav. Similarly, the charge of Himachal Pradesh has been given to senior leader Sushilkumar Shinde, and the young MP from Bihar Ranjeet Ranjan is his deputy. “The Congress party will present a fresh image of its leadership both to the party workers and to the country at large,” said senior leader Mani Shankar Aiyar.

Rahul has altered his style of functioning to suit the requirements. “He has become a better listener. He is more patient. He is meeting senior leaders more often now,” said a Congress leader. He has been in regular contact with senior leaders like Manmohan Singh, Antony and P. Chidambaram.

It has not been an easy journey for Rahul in politics. He has braved extreme ridicule and derision by rivals on social media and survived the jeers of BJP members in Parliament. Now, as he occupies the post of Congress president and confronts Modi, the BJP will have to rethink its game plan. 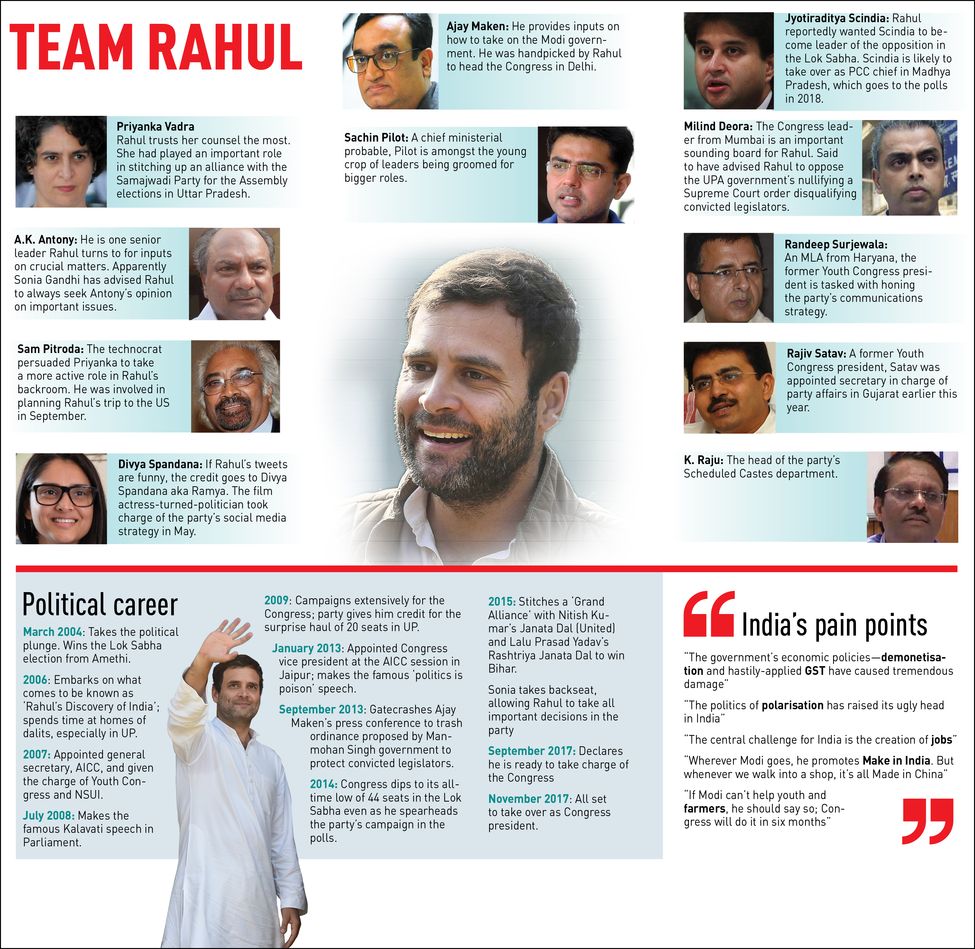