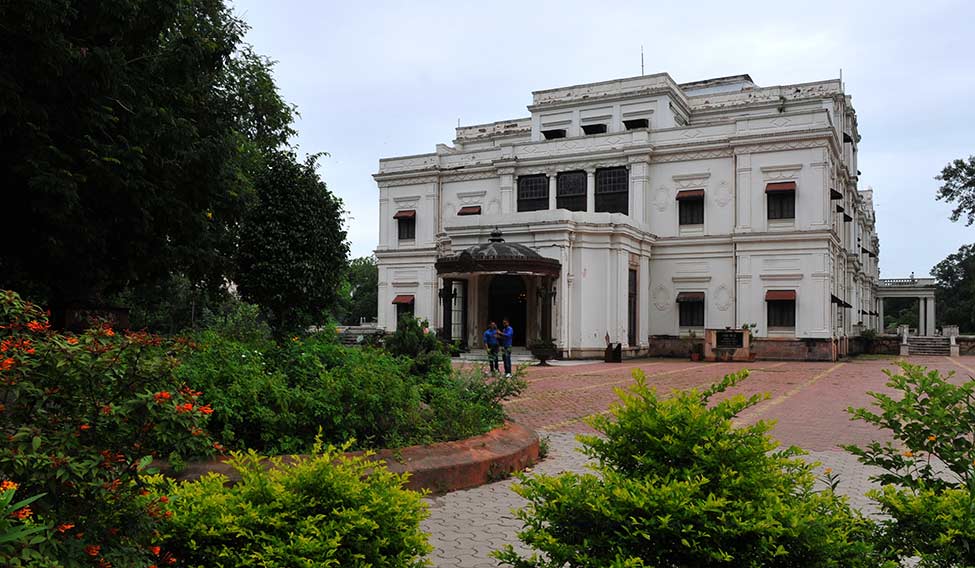 The Holkars, once the pride of Indore, find themselves tangled in family feuds over property

The Lalbagh Palace in Indore bears a silent testimony to the glorious past and the conflict-ridden present of its builders, the Holkars. The construction of the palace began during the reign of Tukoji Rao II (from 1844 to 1886), the 15th ruler of the Holkar dynasty, and was completed in 1921 by Tukoji Rao III. The palace has a unique architectural style—from the Italian marble columns to the gate, which is a replica of the gate of Buckingham Palace. Its 20-acre rose garden with exquisite fountains is unparalleled in central India. The palace was home to Tukoji Rao III till he breathed his last in 1978.

The Lalbagh Palace was an epitome of Holkar pride during Tukoji Rao Holkar III's lifetime (1890-1978). His rule, which began in 1911, was cut short in 1926 because of a romance gone wrong. Married to an American, Nancy Miller alias Sharmistha Devi Holkar, he fell in love with a dancer, Mumtaz Begum, who was his mistress for a while but eventually eloped with her lover, a businessman named Abdul Kadar Bawla. On a January evening in 1925, the king's men attacked the couple in Bombay. Bawla died in the attack, while Mumtaz was injured. Mohammad Ali Jinnah represented the Holkars in the court. It even inspired a Hindi film, Kulin Kanta, by Homi Master of Kohinoor Film Company. After the murder was widely reported, the British asked Tukoji Rao Holkar III to abdicate the throne to his only son, Yeshwant Rao II, who was 21 then.

Post independence though, the past glory of the Holkars has given way to ugly property disputes. In 1987, the Madhya Pradesh government acquired the Lalbagh Palace for 064 lakh following fears of the property ending up with private players, like in the case of the Rajwada Palace, owing to family feuds. Constructed by Malhar Rao Holkar, the first ruler of the Holkar dynasty, in 1766, the Rajwada Palace was later acquired by the government. Malhar Rao initially served under Maratha warrior Peshwa Bajirao and helped expand the empire up north.

Now, the descendants of Holkars are caught up in court cases. Following Sharmistha Devi Holkar's death in 1993, her four daughters—Sharda Raje, Sita Raje, Sumitra Raje and Sushila Raje—fought over properties and other assets including a 100-year-old trunk filled with precious gems and jewellery.

Riti Khandelwal, a heritage expert and conservationist, blamed the royals and the government for the neglect of Indore's royal past. “Holkars before independence were different,” said author Dr Prakash Hindustani. “Today, they are only into property disputes and selling precious real estate year after year.”

Gautam Kothari, president of Pithampur Industries Association, said Holkars developed the city before independence. “In the 1860s, spinning mills were transported using elephants and a rail line was laid,” he said. Architect and town planner Hitendra Mehta said the “first master plan of the city was prepared in 1917 by Patrick Geddes, a Scottish town planner, who was brought by Holkar Maharaj.” Indore got its first electricity supply in 1906 while the fire brigade was set up in 1909. The Madhya Pradesh Stock Exchange, originally set up in 1919, is the only exchange in central India and the third oldest stock exchange in India.

The Holkars weren't confined to Indore; they also constructed temples, like the famous Kashi Vishwanath temple in Varanasi. It was built by Ahilyabai Holkar, who ruled Indore, first as a regent in 1766 and then as a ruler from 1767 to 1795. She also constructed five drinking water wells in central Delhi, which gave the road leading to Connaught Place its name—Panchkuian. This March, the road was renamed after her. 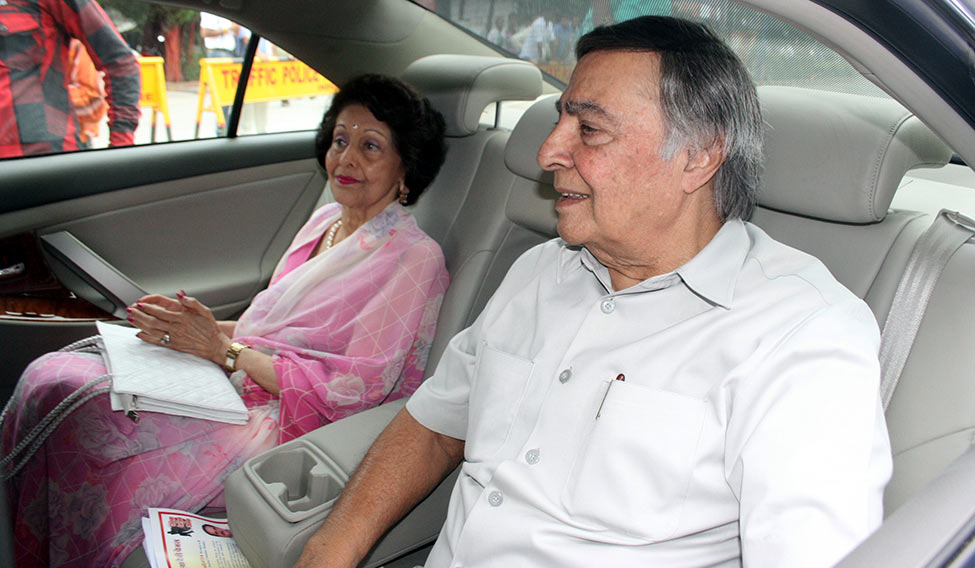 But the golden period of Indore is said to be during Yeshwant Rao Holkar II's reign, from 1926 to 1948. The city developed like never before under his rule. Brought up in Europe, he had a good rapport with the British. He had a fleet of aircraft, and the first commercial flight between Indore and Mumbai took off in 1946. He ordered an air-conditioned railway coach, specially designed by French and German engineers, for himself in 1947. He ordered a similar coach for India's first president Dr Rajendra Prasad, which many saw as his attempts at keeping the new rulers in Delhi in good humour. But he was a visionary, too. He built a hospital—Maharaja Yeshwantrao Hospital—which even today is one of the biggest hospitals in central India. His secular credentials shone through when he opposed the Pentangular Cricket Tournament of Bombay for its communal organisation.

Yeshwant Rao II, like his father, married an American, which is why after his death in 1961, prime minister Jawaharlal Nehru refused to accept his son, Richard Holkar, as his successor. And, Usha Devi Holkar, 84, his daughter from first marriage, was made the titular head. She was married to Satish Chandra Malhotra, owner of the multi-billion Empire Industries, and lives in Mumbai. “She comes to Indore on ceremonial occasions only,” said Hindustani. Abhilash Khandekar, a close observer of Maratha royalty and member of the Wildlife Board of Madhya Pradesh, said Usha Devi preferred to keep a low profile. “She works for the people of Indore through her trusts. Her philanthropic activities are rarely known. She donated land for an international cricket stadium [Holkar Cricket Stadium] in Indore,” he said. Her cousin, Vijayendra Ghatge, too, shared a similar view. “Maharani Holkar is a very private person. She has dedicated her life to the cause of charity, but she does not do it for public consumption,” he said.

Like his step-sister, Richard Holkar, 73, rarely visits Indore, spending most of his time in the United States and Europe. When we tried to get in touch with him, we were told he was abroad. Though he doesn't head the dynasty, he is quite particular about the royal address before his name—Maharajkumar Shrimant Richard Shivajirao Yeshwant Rao Holkar Bahadur. When in India, his base is the fort in Maheshwar, some 90km from Indore. A graduate from Stanford University, he converted the fort into a heritage hotel called Ahilya Fort Hotel. The fort was the venue for the wedding of his son, Yeshwant Rao Holkar III, to Nyrika, daughter of eminent industrialist Vijay Crishna Godrej, in 2015.

Richard Holkar is a man who wears many hats. He owns the Tiger Top Cultural & Adventure Tours Private Ltd, Ahilya Hospitality & Travel Private Ltd and Holkar Designs Private Ltd. A celebrity cook, he has authored a book—The Cooking of the Maharajas. He is also credited with reviving the tradition of Maheshwari saris and building a robust network of village artisans.

But, the Holkars have stayed away from politics, unlike other royalties of central India. “Though some of the royal families of India are still living in the reflected glory of the past, many have well understood and adjusted to the new ways of democracy,” said Ghatge, who has acted in many films and television series. “I have been approached by political parties to contest elections, but I feel that it requires a certain mindset—a person guided by a fix set of principles may not be successful.”

Ghatge said most royals have made peace with the fact that royalty will not come back, “but the respect of people will be there if we are down-to-earth and available for our people.”