Dhoni should have batted higher in WC semifinal: Sehwag 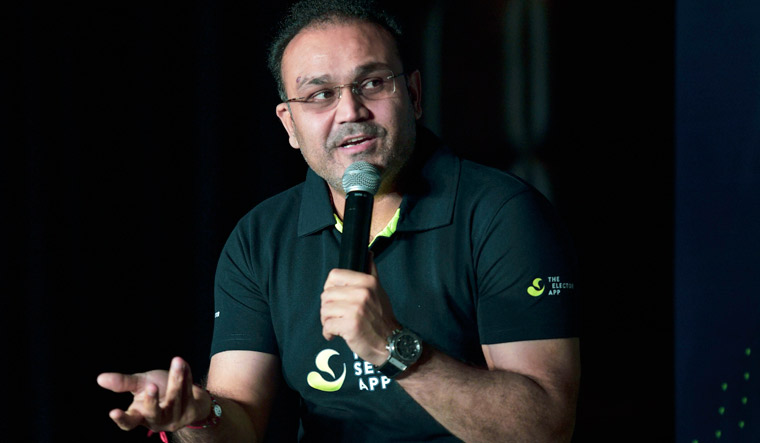 Former India cricketer Virender Sehwag speaks during the launch of an app, in New Delhi | PTI

Former India opener Virender Sehwag has never been one to hold back—be it with his bat or his words. Team India has moved on from the agony of losing in the semifinal against New Zealand in the recently concluded ICC World Cup in England, and focusing instead on the Test series about to start in the Caribbean, Sehwag said that had Mahendra Singh Dhoni been sent ahead of Hardik Pandya, the result might have been different.

The dashing batsman was speaking at the launch of an app ahead of the upcoming Caribbean Premier League.

Dhoni came in at number 7 in the semifinal at Old Trafford, a move which saw the team coming under pressure because of the mounting required run rate. “Pandya can play fast if sent later... scoring at 7-8 runs per over. Dhoni would have been better batting higher as he had the experience and understanding of the situation,” Sehwag said.

ALSO READ: Was Dhoni run out off a 'free-hit' delivery in India-NZ semifinal?

India will kick off its Test Championship campaign on August 22, with the first Test against the West Indies in Antigua. Asked about the criticism over the lack of a solid number four batsman in the World Cup, and a settled middle-order in Tests, Sehwag said, “In Test cricket, I don’t think we have a problem. Ajinkya Rahane is there. If we go with four bowlers, Rohit Sharma will play I think. But if there are five bowlers, then Sharma has to sit out.” There is a debate on whether Sharma—who was in red-hot form in the World Cup—would get a chance to resurrect his Test career.

Sehwag said the team captain and coach have to tell a player where he will bat, and that it is not for the player to decide. “As far as I know, a player is ready to play at any position,” he said.

Sehwag, who has torn apart pace bowlers like Shoaib Akhtar and Brett Lee in his playing days, was asked about the neck guard. The matter has been a subject of much debate after Steve Smith was hit on his neck by a bouncer from Jofra Archer in the second Ashes Test at Lord's. “Why do you have to expose your neck to the bowler when you have a bat in your hand and pads to protect you? In my whole career, I have never even used a chest guard,” said Sehwag deadpan.

Sehwag refused to comment on Ravi Shastri getting another stint as head coach of Team India. He had, in fact, put his hat in the ring in 2017 when Shastri was first picked. “"In 2017, the BCCI secretary and (late) Dr MV Sridhar (GM Cricket Operations) asked me to apply. So, I applied. This time no one asked me, so I didn't apply.”

Sehwag also said he finds it difficult to comprehend the conflict of interest rules.

Sehwag expressed his happiness over former India player Sreesanth's life ban being reduced. “ I am very happy for him. He has to perform in domestic cricket and then get back in contention. When reminded that Pakistan pacer Mohammed Amir, who was banned for spot-fixing, was allowed to make a direct comeback to the national team after the ban, Sehwag quipped, “Anything can happen in Pakistan, not in India!”