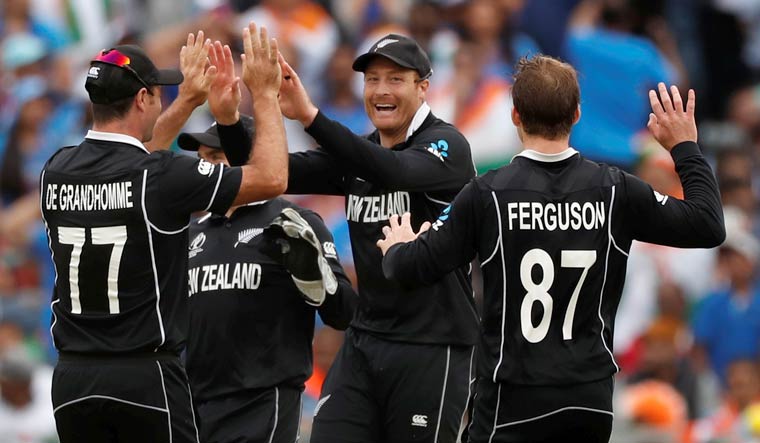 A rearguard action from Ravindra Jadeja and Mahendra Singh Dhoni failed to lift India from a sensational top-order collapse, as they fell short by 18 runs against New Zealand in the World Cup 2019 semifinal at Old Trafford in Manchester.

Chasing 240 to win, India folded up for 221, with Jadeja top-scoring with 77 (59 balls) and Dhoni providing support with a 72-ball 50. Needing 37 runs from the final three overs, Jadeja top-edged a slower ball from Trent Boult, to leave Dhoni with the task of finishing it off.

With 31 needed in two overs, the veteran wicketkeeper batsman started off with a six in the next over by Lockie Ferguson. But a ball later, he was run-out to a brilliant direct-hit from Martin Guptill, to end all Indian hopes of an unlikely victory.

With Dhoni focusing on giving the strike to Jadeja rather than attempting any big shots himself, the onus of finding quick runs fell on the all-rounder's shoulders. And he responded well, clubbing four sixes and as many fours. But it proved to be a too big a task for Jadeja.

Earlier, a sensational spell of seam bowling from New Zealand pacers Trent Boult and Matt Henry blew away the famed Indian top-order, to leave them reeling at 24/4 in the first 10 overs.

India had a disastrous start, with the tournament's top run scorer and opener Rohit Sharma (1) being dismissed in the second over of the Indian innings, nicking one to wicketkeeper Tom Latham off Henry.

Virat Kohli (1) was the next one to follow in the next over. Boult got one to swing in, catching the Indian skipper on the top of the knee-roll. Umpire Richard Illingworth had no hesitation in raising the finger, but Kohli reviewed it. Replays suggested that the ball would have just clipped the bails, and the third umpire ruled it as umpire's call.

K.L. Rahul (1), too, was out nicking the ball off Henry. He was caught in two minds—whether to leave or play—and Latham completed a good diving catch behind the wickets.

Rishabh Pant and Dinesh Karthik played out a few watchful overs, with Karthik opening his account off the 21st ball he faced, with a boundary. Pant, on the other hand, seemed to be growing in confidence with time at the crease.

Karthik, however, did not last long, falling for six runs off 25 balls, to a brilliant one-handed catch by Jimmy Neesham off Henry.

Pant (32) and Hardik Pandya (32) brought sanity into the proceedings with a 47-run partnership, before the former fell to a rush of blood, holing out to deep midwicket off Santner. The left-arm spinner accounted for Pandya, too, who also fell heaving across the line and top-edging it.

Jadeja and Dhoni then joined forces to put on 116 runs, with the former playing a fine counter-attacking innings. But the disciplined New Zealand bowling attack ensured India fell well short of the target in the end.

Resuming on the reserve day from the overnight score of 211/5 in 46.1 overs before rain halted play, New Zealand batsmen were able to add only 28 runs in 23 balls to their overnight score, as Bhuvneshwar Kumar and Jasprit Bumrah ended on a strong note.

Overnight batsmen Ross Taylor and Tom Latham were unable to get the big shots away. Taylor fell on 74 to a brilliant direct-hit by Jadeja, while going for a second run in the 48th over.

Latham (10) fell in the next over to Kumar, with Jadeja judging an overhead catch to perfection near the midwicket boundary. The Kiwi batsmen managed to hit only one four in the 23 balls they faced today. In the end, however, the target proved to be more than enough.

New Zealand will now take on the winners of the England-Australia semifinal tomorrow, in the final on July 14.