Was Dhoni run out off a 'free-hit' delivery in India-NZ semifinal? 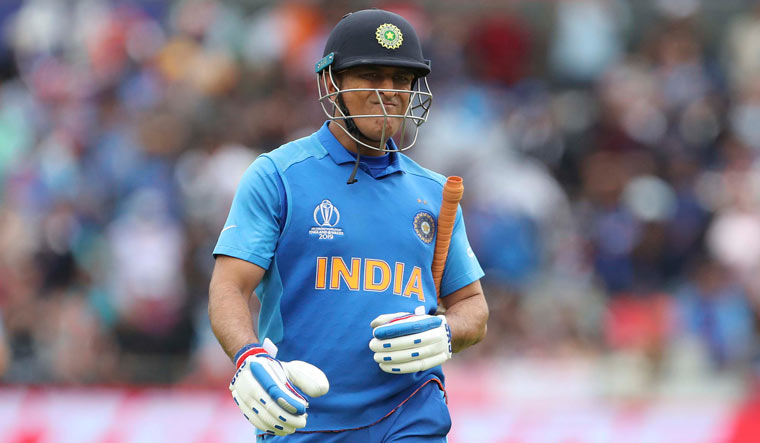 Even as Twitter was flooded with tributes to veteran M.S. Dhoni, who, in all probability, played the last World Cup game—if not the last match—of his career, at Old Trafford in Manchester, several fans have tweeted that the ball before his dismissal was a no-ball.

Same Happened even when JADDU was at 48 pic.twitter.com/T9AQkHpais

@ICC you should tell apologies to whole indians becoz you people done a mistake when dhoni was in strike at 48.2 can you bring it back.😠😠😠 pic.twitter.com/b8meOlu9eu

6 fielders outside the ring 😑

Though a batsman can be run out off a 'free-hit' delivery, the users claimed that in such a case Dhoni might have tried something different and would possibly not have been run out.

The former skipper was brilliantly run out by Martin Guptill on 50, off the third delivery of the 49th over, thus ending India's hopes of an improbable win.

WHAT A MOMENT OF BRILLIANCE!

Though it's all a matter of hindsight and 'what ifs', whether there were indeed six fielders outside the ring and the umpires failed to notice it, has stirred up a debate on social media.

💔 just like every 🇮🇳 supporter.
A good fight put up by @imjadeja & @msdhoni but @BLACKCAPS were exceptional today.
Congrats to 🇳🇿 on making it to the Finals & all the best for the same.
I felt #KaneWilliamson’s captaincy & composure played a crucial role in this result.#NZvIND pic.twitter.com/3sUlW21cgN

Chasing 240 to win and clinch a place in the final, India were eventually bowled out for 221 in the last over. But a 116-run stand between Ravindra Jadeja and Dhoni, after a top-order collapse, raised hopes of an unlikely victory.

Though Dhoni is yet to confirm any news about his impending retirement, speculations were rife that he might call it a day after the World Cup. India's exit from the tournament has added fuel to the fire.

From Prime Minister Narendra Modi to Rahul Gandhi to actor Randeep Hooda, personalities took to Twitter to appreciate Team India and the Dhoni-Jadeja duo for putting up a fight.

A disappointing result, but good to see #TeamIndia’s fighting spirit till the very end.

India batted, bowled, fielded well throughout the tournament, of which we are very proud.

Wins and losses are a part of life. Best wishes to the team for their future endeavours. #INDvsNZ

Though they’re a billion broken hearts tonight, Team India, you put up a great fight and are deserving of our love & respect.

Congratulations to New Zealand on their well earned win, that gives them a place in the World Cup final. #INDvNZ #CWC19

Hard luck team india .. played a very spirited game through the tournament 👏🏽👏🏽 the wicket of Dhoni and his walk back just broke my heart #INDvsNZ proud nonetheless 💪🏽 pic.twitter.com/iGCPhIhLEU

It was also an emotional moment for die-hard Dhoni fans to see their icon walking off after being dismissed, possibly for the last time in the ODIs.

#Dhoni we are waiting for your next war pic.twitter.com/qpXZfnn64J

Several Twitter users also pointed out that Dhoni may well have begun and ended his ODI career with run-outs—he was run-out for nought against Bangladesh in his debut on December 23, 2004 in Chittagong.

Ms Dhoni we will miss you

When asked whether Dhoni has said anything about his retirement, with the squad for the West Indies tour to be announced soon, skipper Kohli, at the post-match press conference, said,"No he hasn't told us anything as of now."